I didn’t shop much while in Singapore. Well, “not much” being relative but while at Changi airport, to take my mind off certain other things I was eyeing, I splurged on the new Guerlain Meteorites Perles in Teint Rose . 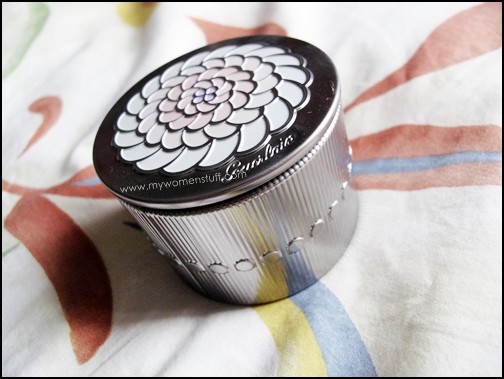 All I needed to know at the counter was “Is this the new packaging?” and once the SA said yes, I was off like a shot to the counter. At S$71 its not cheap but it was a tiny bit cheaper than the retail price of RM185 in Malaysia.

I opened it yesterday and to my surprise (and delight) the new tub is metal! Not metal covered cardboard (as they did before) but a nice light thin embossed metal case. None of that baroque looking gold edged cardboard thankyewverymuch! This is a sleek embossed brushed metal tin with plastic tub insert.

The cover is now literally like that of a flat tin cover instead of the high cardboard cap. I don’t know why but I have visions of Milo every time I open the cover 😛 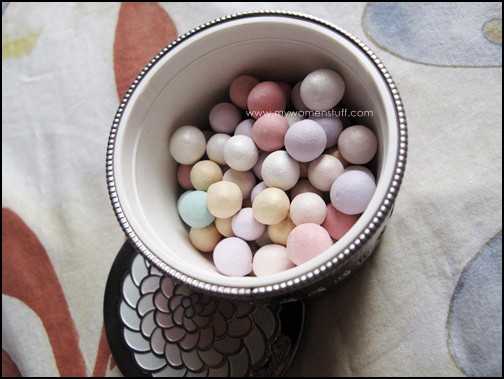 Teint Rose is pretty much Mythic renamed. It all looks the same – little balls of lilac, gold, rose and blue tones to be swirled together to give you that luminous glow. The same luminous glow that Mythic gives me.

I somehow thought that the Teint Rose pearls looked a little lighter compared to my old Mythic Meteorites. Placed side by side, I got the same feeling too. The colour of the Mythic balls seemed a little deeper than Rose Teint.

But when I placed the balls side by side, there is no discernible difference. My guess is that the Mythic Meteorites I own are already quite old so perhaps the sheen that covers the balls are now lost. Or perhaps there is a difference in the formula which makes it look that way. After all, the new Meteorites are supposed to have an improved formula.

On the skin, there is no difference. Or perhaps there is. Teint Rose seems to diffuse the light better so faking flawless glowy skin is even easier than before!

If you already have the previous Meteorites perles, you don’t have to get this one in the same colours – for me, Mythic and Teint Rose are one and the same. But if you don’t already own Meteorites and want to cut your teeth on these little magical powder balls, I think you’ll love the new packaging too! 😀

My love for the Guerlain Meteorites know no bounds 🙂 Here are some previous posts on some other ones I own.

66 comments ... Read or JOIN THE DISCUSSION