My initial perception of Bliss Spa was not a good one.

I decided to indulge in a facial while waiting for my shopping buddies in Singapore to get off work and join me in pounding the shopping beat. Bliss Spa at Sephora ION came recommended and after browsing around online, I found out that their Triple Oxygen Treatment Facial comes highly rated – mostly by beauty editors of mags who likely got it gratis 😛 Still… worth a shot I figured.

My sister helped me make a booking but when she called back to confirm my appointment the next day, they told her that no one had taken the reservation down! The result was that I lost my preferred time and had to settle for a later time slot. I was about to give it up but since I’d already hyped myself up for it, I went with the later time slot. It would also give me more time to get into the city from the airport.

They did offer a 20% discount for the inconvenience which helped placate me a little. After all, the Triple Oxygen Treatment Facial is S$185 and 20% off saves me good money anyway.

I got there way before my allotted time which gave me time to relax and fill up some registration forms which I’m told is de rigeur. They greeted me by name which was a nice touch and while waiting, you can snack on chocolate brownies and have tea or water or lemonade and magazines at your disposal. Lovely! After quite a while, it was finally into the facial cabin and away with the facial! Am I going to rave about it as the other beauty editors have? You’ll have to read on to find out.

No robe to change into

I was dressed in jeans and a T-shirt. I was told to remove my top and get under the covers. There was no robe to change into like in many salons I’ve been to. That threw me for a loop. I’d have preferred if there was something for me to change into which makes it more comfortable. What if I was wearing a dress? I’d have to strip won’t I? As it was, being naked on top with jeans below was uncomfortable and weird 😛

No tools used for extraction and no facial steaming

The facial therapist explained that Bliss Spa does not condone facial steaming because steamers can be a hotbed of bacteria. Instead, they use an oxygen cream covered with clingfilm (yes! the same cling film used for leftover food!) and then layered with warm towels to soften the skin and a retinol product to exfoliate. The retinol product does leave the skin tingling a little but nothing dramatic for me despite the numerous warnings by the therapist on what to expect.

They also do not use extraction tools when performing extractions so the skin does not get damaged. They do perform extractions by hand and depending on how congested your skin is, it can get a little uncomfortable. So do be warned. 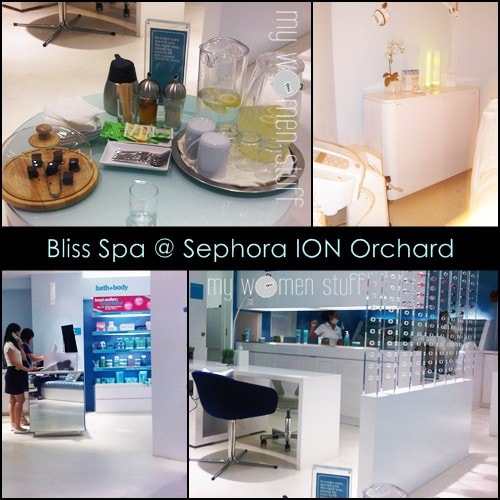 The facial treatment seemed to involve a lot of hot towels on my face. The therapist will apply the products and then place hot/warm towels on my face. To their credit however, there was no time wasting. While waiting for the products to absorb or do their thing, the therapist will perform a short neck and shoulder massage, hand massage and feet massage at various stages of the treatment.

The facial ends with the therapist applying a combination of Vitamin A, C and E oils on your skin and then blasting oxygen on your skin. What you feel is a cool ticklish sort of feeling and then you are done.

I read that the Triple Oxygen Facial leaves your face glowing and I must say that there was a glow but I attributed it mostly to the oils which take a while to absorb into your skin. Also, after the facial, I felt oily and greasy all over, mostly due to the body butter used on your neck and shoulder, hands and feet. My face too looked a tad red and oily, like I’d been out in the sun. At that point, I felt a little disappointed.

However, I felt that my skin actually looked better the next day and on the subsequent days. It did look and feel smoother and clearer and the effect does last for a few days at least, even now a week later. So I personally feel that unless you have never gone for a facial, you may not be impressed by the initial results immediately after the facial ends but give it a couple of days and you will notice the difference.

Relaxing atmosphere in facial room but music could be softer

The facial room was tucked away at the back of Sephora Ion Orchard so you don’t hear the bustling of the crowds outside. The room is kept dimly lit and the chair-bed you are in is pretty comfortable. The music however, is a tad loud and I feel it would be more relaxing if they were to play instrumental tunes instead of pseudo country western tracks.

If you are used to a going for facials, do not expect a facial massage. They don’t do it. Each cream that is applied is applied on then toweled off or is toweled off after having a warm/hot towel placed on it. So, I’d say its quite a different experience.

Will I return? Perhaps. I did like how my facial skin looked about 2 days later – it was clear and smooth (still is nearly a week later); but I wasn’t quite thrilled with the execution of the facial itself. I’ll wait and see when it comes to Malaysia before I decide if I will go for another experience because even at S$148 (the price I paid) it is still an expensive experience.

Do you have a Bliss Spa experience or Triple Oxygen Facial experiece to share? Or am I the only one not raving about the Triple Oxygen facial treatment? 😛

The Triple Oxygen Facial at Bliss Spa Sephora ION Orchard Singapore costs S$185 for 70 minutes. I was told they may bring Bliss Spa to the Sephora in Kuala Lumpur too but it will be confirmed later.