You know, brands have a tendency these days to release little capsule collections alongside their primary seasonal collections, and these days, it’s getting nigh impossible to keep up. So, I did the next best thing. I closed my eyes to all collections LOL! 😀

However, my attempt to avoid them was a little thwarted after I was sent a couple of items from the NARS Eyes Opening Act collection. You will already have seen it in their stores, I’m sure. The one item that intrigued me the most from the range was the Velvet Shadow Sticks. I love using cream eyeshadow sticks, and I just had to know how these ones from NARS fared. Incidentally, the NARS Eye Opening Act collection is already available in our local NARS stores, but from what I see, in the USA it’s exclusive to Nordstrom for now and will be available at the NARS stores and online in March 2015. So if you miss it the first time around, fret not!

There are 5 shades of this limited edition product, which is essentially, a cream eyeshadow in a twist-up stick format. Not unlike that popularised by Laura Mercier and Bobbi Brown, with one notable difference – the NARS Velvet Shadow Sticks are matte. The name is a bit of a give away isn’t it? Velvet.

The other difference is that all 5 shades are very dark. There is Dark Angel (a dark brown), Flibuste (black), Glenan (dark navy blue), Nunavut (dark purple) and Reykjavik (dark grey). I have here Glenan and Nunavut and incidentally, you can view the other 3 shades at The Beauty Lookbook.

But I know what you’re thinking (cos I’m a mindreader, wouldn’t you know?) Do these Velvet Shadow Sticks measure up to my raves for the similar items from Laura Mercier and Bobbi Brown?

I’m afraid to disappoint, but while I am not disappointed by these, I wasn’t blown away either. The colours are fairly deep and while I was told that they work well as an eyeshadow base, I like to use and judge the product on what it claims to do at first instance. That would be to function as an eyeshadow – a matte, cream eyeshadow.

To be fair to the product, it swatches fairly smoothly. It isn’t creamy but it wasn’t dry and it didn’t tug against the skin. Both Glenan and Nunavut were the same. They glide relatively smoothly on the skin.

As the name implies, the Velvet Shadow Sticks swatch matte. 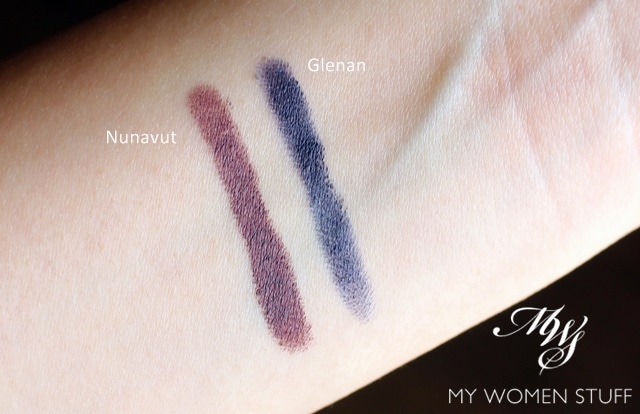 This was with just 1 swipe down my wrist and the colour is fairly pigmented. Glenan is a dark navy blue, while Nunavut is a deep purple. You can, like with the other shadow sticks I like, smudge this on your lids, blend out the edges and go.

But if you do that, you will have to like wearing a pretty intense, deep, smokey eye because that is what you will end up with. On its own, as a cream eyeshadow, I found it wanting.

Also, I found that it would crease a little as the day wears on. Neither of my other favourite cream stick shadows do, which is why I docked points for this one. Perhaps it is to do with the depth of the colour, so creasing is more visible. I’m not sure, but it happens, and I don’t have oily lids. Perhaps wearing a primer helps.

The other way you can wear this is as a base for eyeshadow. For this purpose, the deep colours help deepen your powder eyeshadow that you pat over, and it, again, offers ample opportunities for creating a smokey eye. But again, it has to be a look that you want to create off the bat. Used as a base, I found that it did not crease as much. But it did crease a little nevertheless.

The third option is to wear this as a liner. However, the stick is a little fat for this purpose, as I believe it was designed primarily to be used as an all over eyeshadow. So, if you want to wear this as a liner you will have to use a brush to pick up colour and then apply it to your lash line. Not impossible, but a bit of a hassle, if you are like me and prefer to use a product for its dedicated purpose.

My conclusion therefore is that as interested as I was in the NARS Velvet Shadow Sticks, I can’t say they impressed me. Perhaps if they had introduced some lighter shades, or added a bit of shimmer (I do like my shimmer in cream shadows!) it might have gone down better. It isn’t a bad product, don’t get me wrong, but when I match it up to other brands that do cream eyeshadow sticks and knock them out of the ballpark, this one will be left on the bleachers.

The Nars Velvet Shadow Stick comes in 5 limited edition shades and are cream eyeshadow in a matte texture. They are fairly pigmented and apply quite easily on skin. Due to the depth of colour and strong pigment, I’d say that these are good for doing a smokey eye, or if you like wearing deep coloured eyeshadow. You can wear these on their own or as an eyeshadow base to deepen the colour of your powder shadows, or as a liner if you use a brush. I did experience some creasing through the day, and a little transference but nothing I’d really complain about. I think it’s a nice concept, but I do think there are better similar products out there that I’d rather get than these.

PROS: Fairly long lasting, Easy to blend but you have to be quick, Makes a good base to deepen eyeshadow, Makes it easy to create a smokey eye, Multitasking product, Easy to use

CONS: Creased a little, Works but is otherwise quite unimpressive

WHO WILL LIKE THIS: Anyone who enjoys using cream stick eyeshadow and are looking for a deep, pigmented colour in a matte texture

For completeness, here’s how I wore Glenan, just for reference. 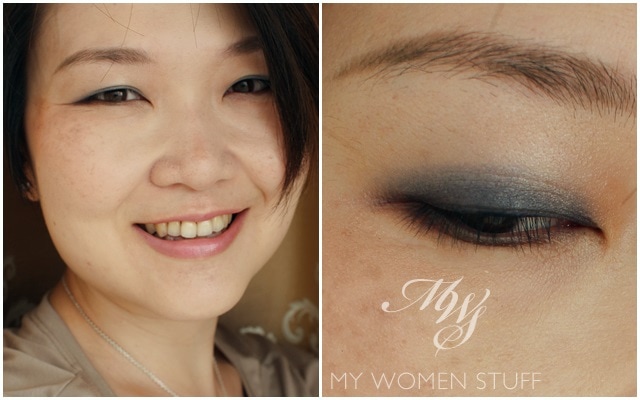 I applied Glenan all over my lid and with my finger, smudged and blended out the edges. I also cheated and used a light highlight shade from a random palette to highlight my brow bone area and to blur the edges. It is a little washed out in the photos, but it was fairly intense in person. I think adding a touch of shimmer helps bring the colour to life as it is otherwise a little flat.

Did you check out the Nars Eye Opening Act collection? Do you like using these crayon stick type eyeshadow?

I love these sorts of eyeshadow because they are usually very easy to use, and for a spell during my blog hiatus last year, I practically lived in them! But I do like them with a touch of shimmer to keep it multi-dimensional and interesting because when I use these shadow sticks, I tend to use them alone.

PREVIOUS POST: Your Say: Do you care at all about the Pantone Colour of the Year?
NEXT POST: For body oil that’s affordable and effective, I’d pick EO Products French Lavender Body Oil everyday!