Home » Interesting Discussions » Your Say: Do you care at all about the Pantone Colour of the Year?

Towards the end of every year, just as everyone is feeling a bit tired of the glitz and glitter surrounding the Christmas season, and feeling just that little bit more stuffed from feasting, a ripple goes through the beauty industry when the Pantone Colour of the Year is announced. I only mention the beauty industry, because that’s where my finger on the pulse is, as it were.

Suddenly, with this announcement of what the “Colour of the Year” is, we see brands, magazines, blogs et. al. explode with suggestions on how we can wear this colour and more importantly, where we can buy this colour so we are “with it”. For 2015, the Colour of the Year is Marsala, a rather vague browned red shade; and as I’ve noticed in the past few years, Sephora is right there with a host of new makeup representing this colour. 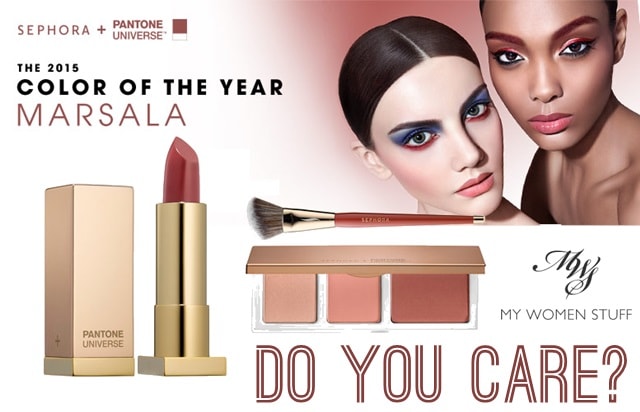 Honestly though, do you care?

Do you care what the colour of the year is, or where you can buy something in that shade so you feature the colour on you at some point? Does it matter to you what some high flying executives in a printing company decide should be the sell out colour in a specific year? Do you take an interest?

I’d never heard of Pantone until approximately 8 years ago. It was only because I had to get some printing done and the designer worked with Pantone colours. It was then I learned what it was and how their colour system worked, so you get the exact shade you want. It’s a bit like a universal colour system as it were, so if you specify a particular code, you get the exact same shade every time, regardless of manufacturer. It’s very useful in the printing industry, I learned.

A few years after that, the beauty industry picked up on the Colour of the Year of 2011, Honeysuckle. It must have done well, because there’s been no turning back. Sephora has even collaborated with Pantone to create whole ranges of makeup based on or around the Pantone Colour of the Year, which started with Tangerine Tango in 2012, Emerald in 2013, Radiant Orchid in 2014 and now Marsala in 2015. From the numerous blogs on the range, and its sold out status, it seems popular.

For interest, here are the Pantone Colours of the Year through the years which I extracted from Wikipedia. 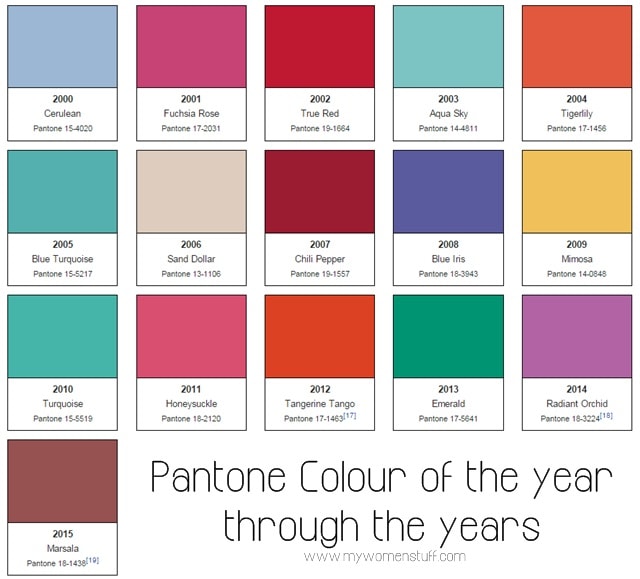 But seriously again, DO YOU CARE?! 😛

I don’t. I honestly do not give 2 hoots about what the colour of the year is or how I might wear it, nor do I even care enough to own something in that shade. In fact, when the announcement is made, I usually start rolling my eyes at the buzz of activity. Seriously, we aren’t that starved for news are we? 😛

To me, this is just one big marketing push both from Pantone and from Sephora and if there’s one thing you can be sure of me, is that I hate being pushed anything. The more I’m marketed to, the more I dig my heels in and resist.

Perhaps it’s just me. Perhaps, if I were in the print or design industry, it might stir up vague feelings of interest. As I’m not (and not very creative to boot) this irritates me at worst, and just goes over my head at best. In one ear, out the other. Halfway through the year, we won’t even care what the bloody colour of the year is.

Oh and as for Marsala, it’s a lovely wine for cooking and makes a very good base for kickass tiramisu. That is all I’ll say on the subject 😀

So, Pantone Colour of the Year – do you care? Weigh in with your views!

You know mine. I cut across the grain, not flow along with the tide so I hate anyone dictating to me what my or anyone’s colour of the year should be. Besides, wear what flatters you and makes you happy! So no, I don’t care a whit what Pantone (nor the beauty industry) says about colour.