I told myself “PB, my girl, no more Meteorites for you. They’re getting far too expensive, with less content. Besides, you own so many already!” Naturally, that pep talk didn’t work, for my newest addition to my Meteorites collection is the Guerlain Perles de Legende, released for Christmas 2016. Willpower. What’s that?

I wasn’t going to do a blog post at first, but over on Instagram, I was convinced to – just to keep with tradition. So here it is – Perles de Legende. 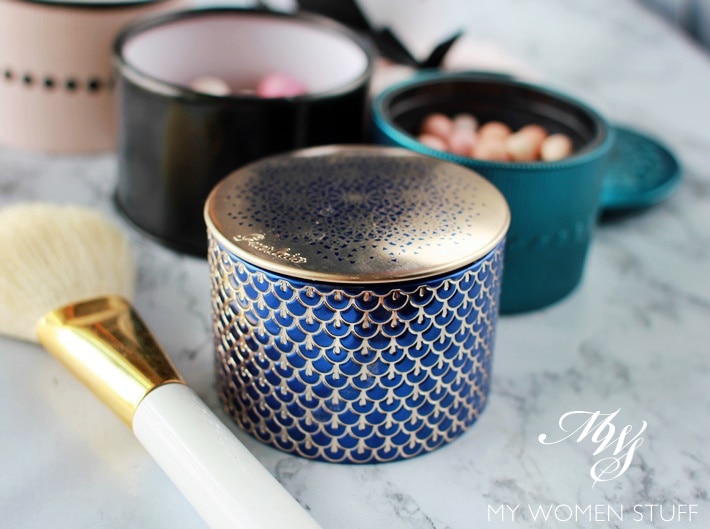 I skipped the Guerlain Meteorites releases this year (from memory) I didn’t get the Carousel one, because reports were that it was less suited to an all-over finishing powder, being too pink. I didn’t feel any tugging on the heartstrings either, so I was happy to pass on it.

But for some reason, when I clapped eyes on the Guerlain Perles de Legende, I felt the stirring of feelings I thought were dead. I think it started with the packaging. While constructed like the regular tins, it was the contrast of the deep, bright royal blue and gold, that grabbed me by the … er… balls LOL :D

For some reason, the deep blue outlined with gold design on the side of the tin made me think of armour. Or dragon’s scales. It evoked feelings of fantasy novels, of gallant knights in shining blue and gold armour, heading into the sunset to fight a dragon…. and die in the process :P

Pop off the golden cover, remove that nasty bit of sponge within (I do wish they’d kept with the puff, for Christmas at least) and the golden hoard that lay within the scalloped case was a feast for the eyes. 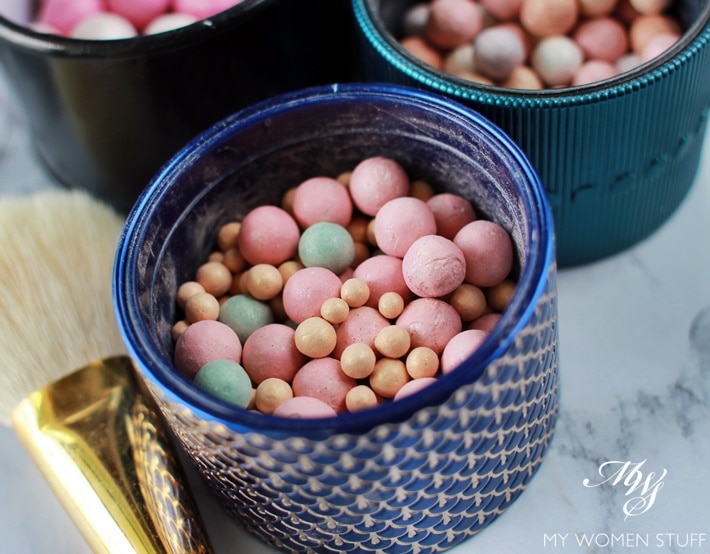 Like the contents of a dragon’s lair, the pearls within came in varying sizes, with varying colours. My eagle eye could only discern 3 shades – pink, green and gold.

Previous versions of Guerlain Meteorites came with similar sized powder balls in the tub. But with the Carousel Meteorites and this Perles de Legende Meteorites, Guerlain has now included some shrunken balls. In this case, shrunken golden balls.

In some ways, it makes sense. I find that my brush doesn’t pick up as much golden powder as I was afraid it would. I think it might be because the smaller powder balls mean that the colour is more evenly dispersed, and therefore, gives more of a hint of colour, as opposed to full on bling.

At its heart, the Guerlain Perles de Legende is still a finishing powder (do read my 101 primer on Guerlain Meteorites powders for a better understanding of what I think they do best) albeit one that will impart a little more shine and glow than acceptable to some. 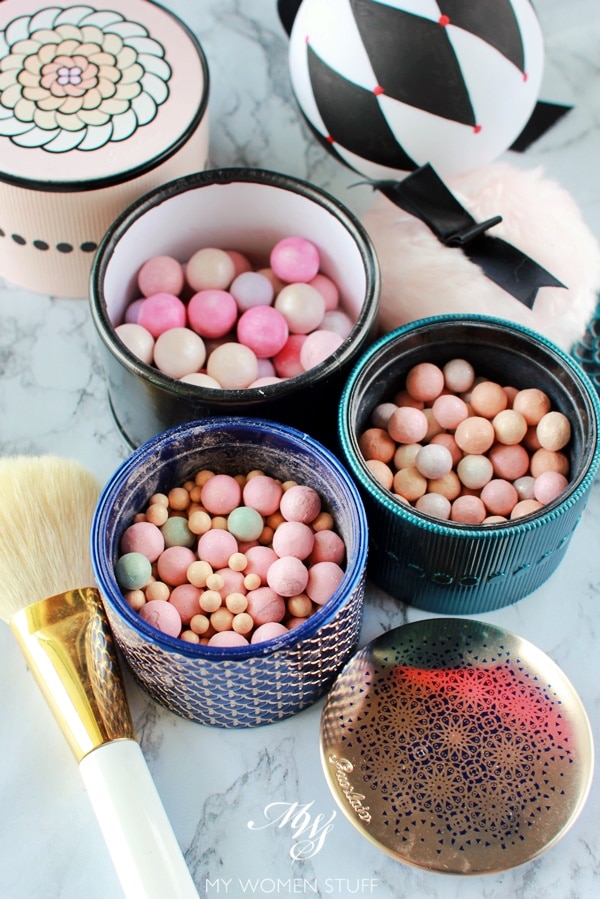 I use these all over, with a large fluffy brush. But be warned that the problem with the smaller balls, is that they tend to get picked up by the brush, so you do have to tap off, before applying or you might find the balls spraying in all directions and going missing. It’s a hazard with Meteorites, but more so with the inclusion of the tiny balls.

While the Perles de Legende impart little to no colour (as per normal), I do find that they give skin a little bit of warmth. Just a little, with a gentle golden glow that ties your base together. If you are heavy handed, you may notice the shimmer if you use it in the day. In the evenings however, or in dimmer lighting, it makes your skin look sublime, as if it’s glowing with the reflection of candlelight.

It is with this in mind that I warned friends that the Perles de Legende was, for me, a dressier Meteorites. It’s one you pull out for use in the evening, or if you’re headed out for a party. It’s not something I’d use everyday. However, I say so, as someone living in the tropics, where the sun shines the whole year round, so harsh sun + shiny powder = disaster.

However, in a gloomier climate, which most of the world is plunged into at the year end, you could even get away with using these during the day, just to give your skin that imperceptible hint of warmth. It’s so subtle, but it’s there, and no, don’t even look in the mirror trying to see it. This isn’t a bronzer, nor even a powder. You won’t be able to see it, but wait till you catch a glimpse of yourself in the mirror as you walk past one, and you think “Goodness, does my skin look that good?” That’s when you understand the Meteorites :) If you’re just buying it because it’s “pretty” then save your money. Meteorites are magical, but only when they’re used, not when they’re sitting pretty on a shelf to satisfy your packrat desires. 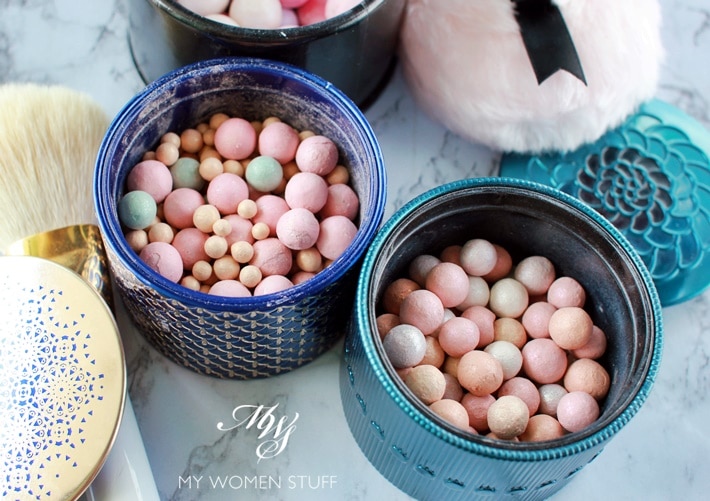 Part of the reason I was so enamoured with the Perles de Legende, is because it reminds me of one of my favourites – Perles de Nuit. Perles de Nuit gives your skin the most beautiful champagne gold glow I have ever seen. For the day, it risks looking a bit shimmery, but in the evening, under warm yellow lighting, your skin looks lit from within by the warm, gentle glow of candlelight. This is the one I pull out when I want to make a difference, because it is the most beautiful Meteorites effect I’ve ever seen.

Perles de Legende is a little more subtle. It’s beautiful, and the gentle glow is reminiscent of the magic found in Perles de Nuit, but it is also a little toned down. Other than the shimmery gold balls, the pink and green powders aren’t shimmery, so there is a little less bling factor. There are also no white powders in there, which makes it less shiny. Yet, I find it different enough from the most recent Meteorites offerings from recent years. I’d been waiting for a repeat of Perles de Nuit, and while Perles de Legende isn’t quite the same, it’s about as close as you can get.

If you want a Meteorites that is, what I’d call a “dressy Meteorites” then Perles de Legende is what you’re looking for. I found the Perles du Dragon too shimmery and pale, The gold and pink powders in Perles de Legende offer skin sufficient warmth and radiance, to be far more flattering.

It’s a Meteorites powder, it’s pretty. I love the packaging, but I don’t like how they stuck to the thin sponge insert that serves to hold the powder pearls and prevent them from moving around and breaking up. The powders meld on skin to a lovely radiant, imperceptible golden glow. I find it to be far more flattering in low light, although if you use a light hand, and don’t have bright lights shining on your face, you can get away with using it in the day as well. There is no obvious glitter nor large chunks of shimmer. It’s just fine and subtle, the way all Meteorites powders are. Don’t think of this as a highlight powder. It isn’t. Just use it all over, and it’ll tie in your base together. Then go to town with your highlight if you must.

PROS: Beautiful packaging, Good combination of powders to give skin a radiant, illuminated warm glow, Not shiny nor shimmery, Works for most skin tones

WHO WILL LIKE THIS: Anyone who understands how Meteorites powders work, Meteorites collectors, Anyone who wants a Meteorites that makes your skin look amazing in lower light conditions 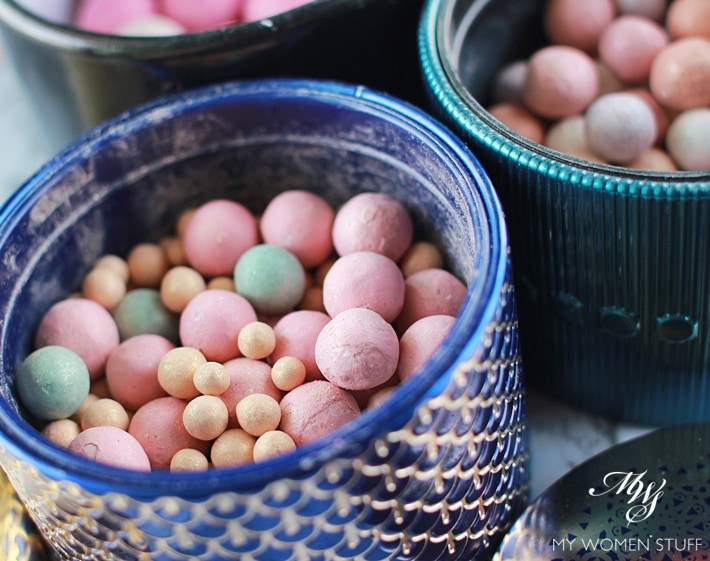 There is one thing I’m a little leery about. I noticed that despite the content being the same as regular Meteorites (25g), and the inclusion of smaller balls, the tin looked fuller than I expected. At first, I wondered if they might have increased the content, but I was disheartened to note they hadn’t.

Instead, what Guerlain sneakily did, was to raise the inner tub insert, so it sits higher than the outer packaging. I noticed this by chance one day, when I stuck my fingers in the tub to pick up one of the balls and found my finger hitting bottom. I thought it was very sneaky of them. The other thing that really pisses me off, are pictures on social media that depict a full to overflowing tub of Meteorites.

I understand if Guerlain themselves posts a picture like this, for their promotional purposes. They’re trying to sell a product. What do people on social media get out of it except to give a misrepresentation to their public? It’s a pretty picture, but it’s misleading and unnecessary. Think about it. If your tub is full to overflowing, how on earth can you cover the tub? That sort of crap really shits me.

Did you splurge on the Perles de Legende and if you haven’t, have I made up your mind?

Did I help, or was I part of the problem? :D I’d love to know if you decide to get it… or don’t ;) It’s expensive though. I died a little when I handed over my credit card. Everything in the collection was so shockingly expensive, I passed on the Rouge G lipstick even though it was a beautiful red. I only allowed myself 1 item from the collection and the Meteorites always wins. Hands down! :D

PREVIOUS POST: Expanding my cream cleanser wardrobe with the Antipodes Grace Gentle Cream Cleanser
NEXT POST: Your Say: Do you check clothes wash care labels? Plus a tip for stretching out a dress that shrank in the wash

31 comments ... Read or JOIN THE DISCUSSION