Home » Eyes » Eyeshadow » In the cream eyeshadow Jungle, it will be a Bronze Moon (not blue) before I love the By Terry Ombre Blackstar

You know, I kind of hate it when a product is very popular with many people, but doesn’t sit well with me. It often makes me wonder what’s wrong with me. Am I too picky? Is my skin weird? What is WRONG?!

And then I realise that well, nothing is. Quite often, it comes down to differing preferences, or just weird skin! 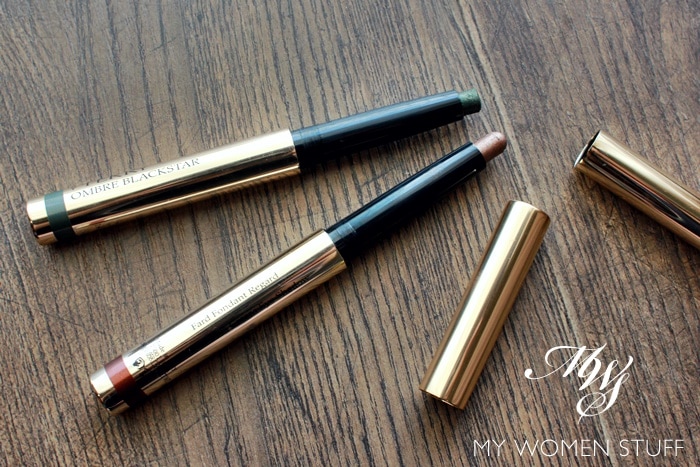 And then I realise why – not everyone gets it right. I’ve tried some that have gotten it horribly wrong, and I have my favourites (Laura Mercier and Bobbi Brown, if you’re wondering – I have multiples from both brands!) But the By Terry Ombre Blackstar pens come highly rated. I’d be hard-pressed to find someone out there who doesn’t like these, and I was pressed to try this. “Try it!” the sirens cooed “You will love it! It’s smooth, it’s creamy, it’s got beautiful colour!”

So I tried it. And you know what sirens do in the myths? They lure you to the rocks so you crash and burn. Ah yep, that was me, crashing and burning while the sirens cackled overhead 😛

Thing is, I can’t fault the texture. The By Terry Ombre Blackstar cream shadows are indeed sublime in texture. 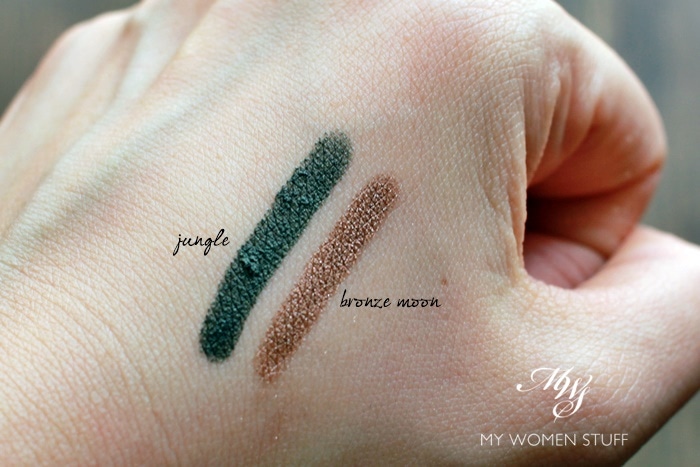 I bought 2 shades – Jungle (a deep olive green – not as bright as the swatch above) and Bronze Moon, a shimmery bronze. Jungle has less shimmer in it and is fairly deep.

You can wear both colours on their own, or blended, or as a base for powder eyeshadows, where they act like a primer and colour enhancer. Worn as a base, I find the colours lasting hours, and they truly do make an excellent base. Jungle in fact, can act as a base for a very sultry smokey eye look, as it is different – few people do smokey eye looks with green shadow, so this makes it very interesting.

I often wear them on  their own however, or blended together, like I do in my 3 second eyeshadow look. Ok, maybe not 3 seconds, but definitely under a minute to get perfect looking eyeshadow. Bronze Moon is a very popular shade, if you look up the online reviews, and it is very nice, because it isn’t too orange.

When I swatch them on the back of my hand, they set very quickly and don’t budge after a while. I thought it was very promising.

However, for some strange reason, when I wear them on my eyes (since that’s where eyeshadow goes, not on my hand) they tend to move, and fade after a few hours. It’s very strange because I haven’t come across anyone else having a similar problem, and I don’t even have oily lids! 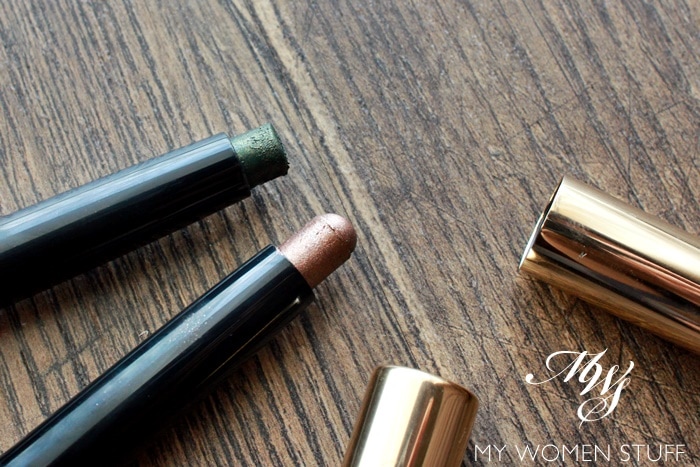 I smushed my Jungle hence the weird shape. It originally arrives looking like Bronze Moon does

On my eyes, Jungle on its own is a rather dull green and I find that it has a tendency to travel as the day wears on and the colour fades and creases a little. Ditto Bronze Moon. Now, it might be worth noting at this point that I do not have a problem with either Laura Mercier or Bobbi Brown’s eyeshadow pens, which stay put all day long. In fact, I don’t have a problem with shadow at the best of times (I don’t wear a primer)

When I blended Bronze Moon with a colour from Bobbi Brown, I noticed immediately how Bronze Moon faded and shifted, while the Bobbi Brown shade stayed put. I think it’s because the By Terry Ombre Blackstar has a creamier texture while both LM and BB are slightly drier. I also find the By Terry softer which might make it prone to breaking. Notice how I managed to smush one of mine.

When I touch up using a powder shadow over the cream base, it is very nice. But I do think it’s far too expensive for me to use as a base product. I’ll be sticking to what I know works for now.

The By Terry Ombre Blackstar cream eyeshadow sticks have a beautiful creamy texture and glides on skin very smoothly. The shimmer shades are fine and shimmery without looking glittery. While these come highly raved for texture and longevity, and have a wide selection of colours, I’m afraid I’m not a fan. For me, the Ombre Blackstars tend to travel, crease and fade as the day wears on. I think it might be because of the creamy texture. I’m afraid these fell quite short for me.

PROS: Easy to use, Wearable colours, Sets to be budge-proof on my hand but not on my eyes, Makes a beautiful base to intensify powder eyeshadows, Blends easily with fingers

CONS: Pricey, Too creamy for me so it tends to travel, crease and/or fade over time

WHO WILL LIKE THIS: Anyone who enjoys using cream eyeshadow sticks

Have you tried these By Terry Ombre Blackstar shadows? Do you like using cream eyeshadow sticks?

I always resort to cream eyeshadow sticks when I’m short of time, or when I want something that stays put all day long. I wanted so much to love these, the way so many people do, but I guess we were just not meant to be. Ah well, money saved… till the next siren’s song 😛

PREVIOUS POST: Your Say: Do you use different skincare products for day and night? Must you?
NEXT POST: Let’s see if the Hada Labo Perfect UV Gel SPF50+ PA++++ is a perfect budget-friendly sunscreen