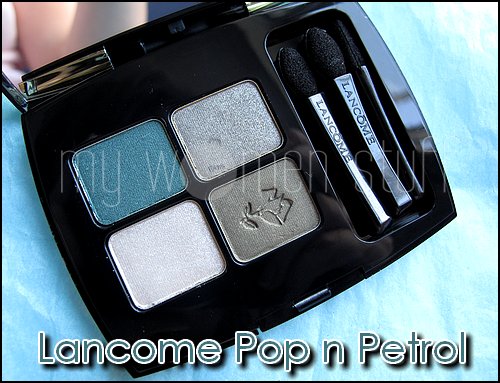 The 2 niggling thoughts that first crossed my mine when I saw it was:-

The rectangle pans are smaller than I’m used to. It might be because I’m used to Lancome’s round pans in the Color Focus quads. The eyeshadow palette comes with 3 sponge tip applicators which as usual, I don’t use.

Now when I first saw Pop n Petrol online, I thought it looked remarkably similar to the Colour Focus Quad in #104 (which I own) and #105 (which I don’t). But when I did set them side by side, I realised there wasn’t that much similarity after all.

None of the Color Focus quads I own have that bright teal. When swatched, its not really quite as bright as it looks in the pan. Good if you were afraid it was too bright. Bad if you wanted it to look exactly as in the pan. You could, with an eyelid primer like Urban Decay Primer Potion – one of those times I’m glad I have it :P

However, when toned down a little with the olive shade, I wear this palette to work. Friends did not believe me when I told them I was wearing Pop n Petrol. I wonder if its because it wasn’t looking too hot or if it was more wearable than they expected? I hope it was the latter :P Hop along for some swatches below.

The palette is housed in a slim gold rectangle case. Very elegant which is what I’ve come to expect from Lancome. The 4 colours are Teal, Shimmery Grey-Green, Olive and Shimmery white-cream.

The colours in the palette feel a little hard to the touch. The Teal shade has a little shimmer but the Olive is matte. The 2 shimmery shades take a bit to pick up and show up on the skin. Great if you dislike high shimmer in eyeshadow. Not so great if you prefer shimmer.

Look A was done with just 3 colours :-

Its a look that can easily pass muster for work days because the shimmer is not too strong that your boss thinks you are going for a party.

Look B was done the same way as Look A but I added the Teal on the outer corner of the lid. I then swipe some of the Shimmery White-Cream over the teal to give it a touch of shimmer. I prefer it looking this way. As you can see, its not that bright on the skin as it is in the pan.

Pop n Petrol eyeshadow palette is a limited edition product under Lancome’s O My Rose Spring 2010 collection and retails for RM140 (about RM35/shadow). I do like it but that’s because I like the deeper shades of green in this palette which makes it easier to pull off for work. I like that I can add the teal if I’m feeling daring or leave it out if I’d rather project a more serious image.

If you have never tried a Lancome eyeshadow palette, this is a good introduction because I personally feel the colors are wearable. You can deepen the colour with black eyeliner pencil if you prefer and its not so pigmented that its easy to make mistakes.

Cons: Some might find it too sheer, Olive colour has hardened a little from oils from my fingers

Is that Erika F in the palette?

What caught a lot of women’s eyes when they saw the Pop n Petrol palette is, “Is that Erika F in there?” Lancome tells us that the answer is No. It looks like Erika F but falls short in my opinion. Here is a comparison with Erika F G40 Ombre Absolue eyeshadow.

In pan, Erika F and that Shimmery grey-green shade in Pop n Petrol bear some similarity. However you can see that the colour of Erika F is deeper.

When swatched, Erika F with just 1 swatch produces the intense colour that you see in the picture. Pop n Petrol needed 2 swipes to get that colour. Erika F is vastly superior in terms of quality and colour pay off. Also the colour is more beautiful and super sparkly! I can’t quite describe the colour – can you?

Disclosure: Product featured is a Press sample for consideration. My opinion is never compromised. To understand my posting policy please read my disclaimer.