When I first saw the Maybelline gel eyeliner, I was reminded strongly of the Kate gel eyeliner. It must have been the packaging and the brush that is included in the set. So, I was rather worried at first because you see, the Kate gel eyeliner I have has a very strong chemical scent I truly dislike. It also did not last long and was just basically one failure after another. The only thing I liked was the brush. I think I’ve tossed the liner. 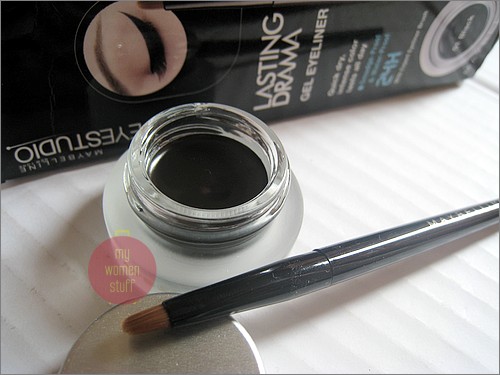 I’m happy to report that the Maybelline gel eyeliner is anything but a failure! The first thing I did when I opened the tub was to take a healthy sniff. No scent = good! The second thing I did was to test the included brush. Tapered, dense and fairly stiff synthetic bristles make for a good liner brush. I was already fairly impressed. The next test came how it applied. The Maybelline gel eyeliner is a nice creamy gel so it applied very smoothly. It was easy to pick up colour and to apply it. Here are my tips for applying gel eyeliner.

It was easy to get a nice line near to my lashes and a nice winged flick at the outer edge of the lid. I have Black which is a dark dark black – just how I like my liners. Upon applying, it can take a couple of seconds to dry, so don’t blink too much or it might transfer.

Once applied, it lasted on me the whole day without smudging so I’m giving this the thumbs up! The Maybelline Lasting Drama Gel Eyeliner retails at RM39.90 at all Maybelline counters. It comes in Black, Brown and Blue (Limited Edition).

You know, since gel eyeliners dry out eventually I might just switch over to the Maybelline gel liner once my Bobbi Brown gel liners dry out for good. It performs just as well for me, and costs much less! Now Maybelline, pretty please make some nice metallic colours and I’m a convert! 🙂

Have you tried the Maybelline gel liner? Do you have any thoughts on this? I’m rather taken by the thought of having a blue liner 😀

78 comments ... Read or JOIN THE DISCUSSION