If you didn’t notice, we gained a whole extra day today. Since February 29th comes round so rarely, I thought I’d show you something that comes around just as rarely, if not even more so! This is the Chanel Perles et Fantaisies Highlighter, a beautifully embossed illuminating powder that beauty buffs amongst you will have seen make its round on social media. 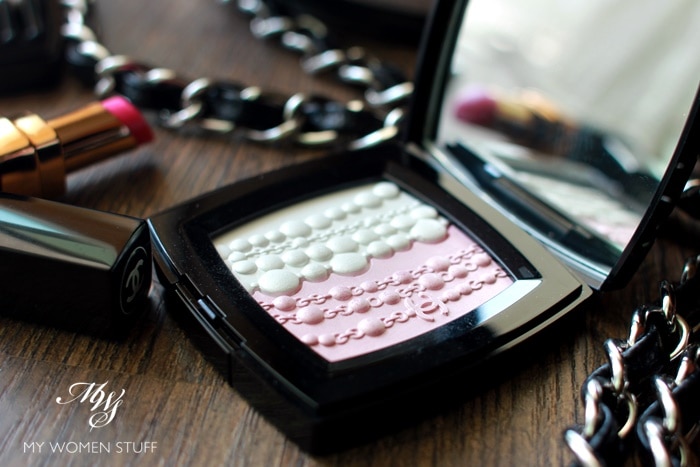 The Perles et Fantaisies highlighter powder is part of the Les Sautoirs de Coco, a makeup line which is an extension to the le Blanc collection. le Blanc, for those of us who find it just Greek, is French for “white” and thus, the whitening collection. Most brands these days have one, and they used to be exclusive only to Asia, but I’ve seen this powder pop up everywhere else, so I think it’s a worldwide release this time.

What really captures the eye is the intricacy of the details embossed on the powder. As the name suggests, the white and pink powder is embossed with the suggestion of a multi-layered string of pearls, with the Chanel logo. If I’m not mistaken, you could likely find something similar in the Chanel accessories collection. I haven’t looked – too dangerous you know. Credit cards might be hurt in the process LOL! :D

To be perfectly honest, I’m not sold on the design. I might be one of the rare few who aren’t, because I know of many people who really like it. But like an eyeshadow embossed with sequins from years and years ago, I find it gives me the goosebumps :P But goosebumps aside, is this something you’d like to have in your collection? :)

Well, let me be honest and say that if you are a Chanel powder collector, or a makeup collector, or a collector of interesting, pretty compact powders, then yes, this is a must have for you.

But if you’re someone who’s more into USING your makeup instead of just collecting it, then I’d actually suggest that you get something else. The reason is simple. I don’t think the Perles et Fantaisies highlighter is all that good for the price you pay. 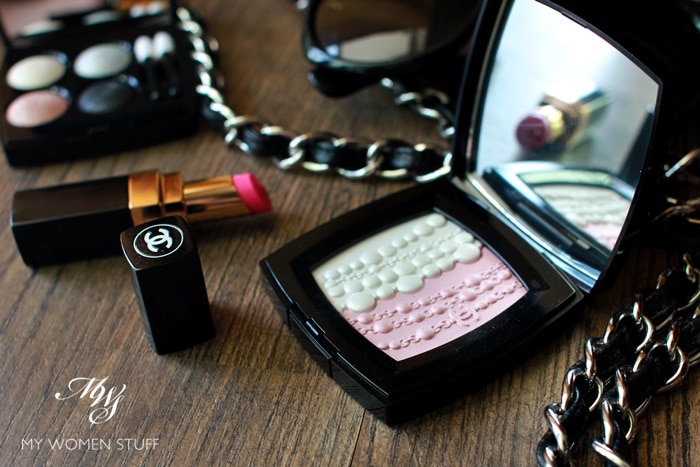 You might like to know that the compact in my photos is used. For some reason, the powder is hard enough so the pattern remains even though I’ve swiped my brushes over the surface and even rubbed at them with my fingers to create swatches. In that sense, I find that not a lot of product is picked up on the brush and the pattern will remain for a long while, so use away!

However, as this is a highlighter, I wouldn’t want too much product on my brush anyway. If you look at the swatch on my arm below, you may notice how the colours swatch fairly icy.

I was actually quite surprised to note that on skin, it did not show up as being very white or very pink. In fact, it isn’t too shiny or shimmery at all, and does give a gentle sort of illuminating effect to the skin. I’ve got an example of me wearing it in the picture below, where you might just see the hint of a highlighted pinkish shine on the top of my cheekbones. 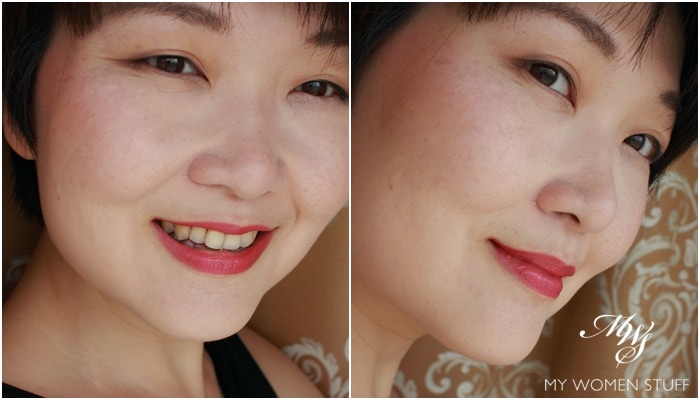 I couldn’t get any better pictures, because that’s basically how it looks. Like nothing very much when you use a light hand. That might appeal to some of you and it might even appeal to me, as I’m not that crazy about using highlighters, except I do think that if you were using a highlighter, you might want something that actually shows up better, and punches you in the gut and make you go WOW! I actually like the affordable theBalm Mary-Lou Manizer for this purpose.

This one’s more like a fizzled out firework. A bit of an anti-climax.

But you know what? If you’re a makeup collector, this will be sitting pretty in your stash already! :) If you aren’t, there are options out there so shop around :) 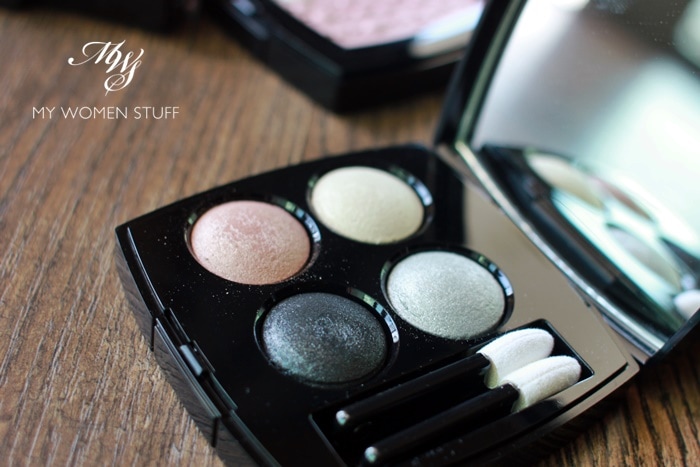 I’ve got swatches of the shades above, where you can see that all the shades, bar one, are on the very light side in terms of colour. Because of the shade of pale pink, silver and yellow used, they tend to show up as pretty much shimmer on the skin. The black on the other hand, is fairly deep, but also filled with shimmer.

Chanel reformulated their eyeshadow quads 2 years back, so the colour pay-off now is much much better than it was before. So I wouldn’t say this quad is a write-off per se. It will just appeal to those who like using pale, icy shades like these and ground them with the black.

I’m actually wearing them on my eyes in the look above, except you can’t really tell because they are that light. This is not a quad that will appeal to many people. I’m personally not sold on it, and this coming from someone who’s wearing out Poesie because it’s so easy to use. I find that Ombre le Lune has more fall out, and more shimmer and is just underwhelming overall. 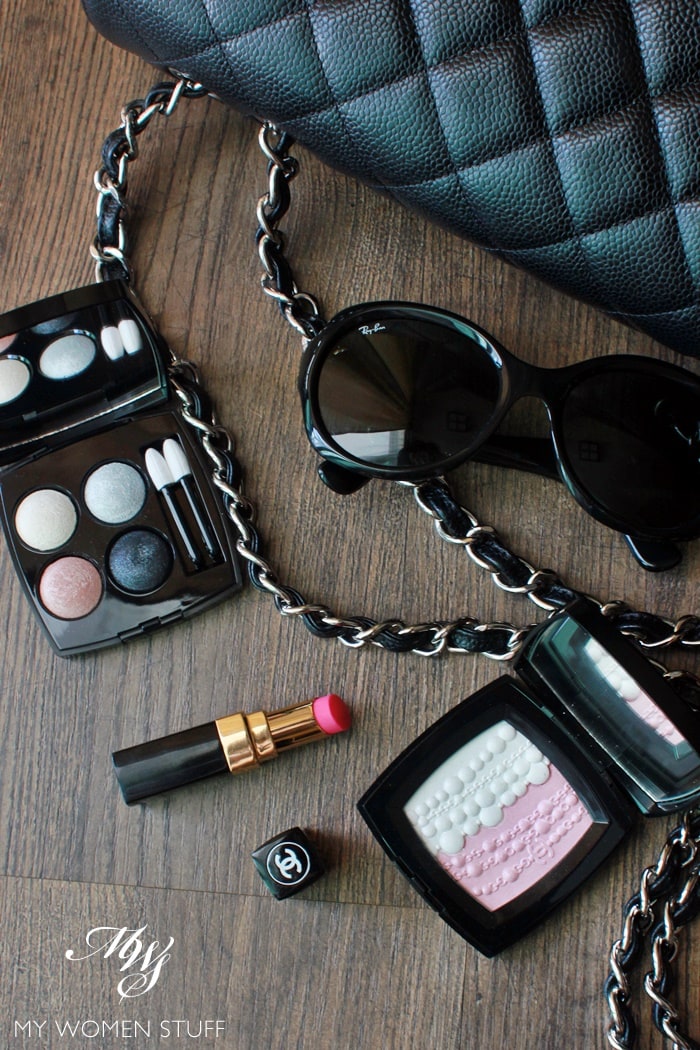 I regretfully find both the items featured here – the Perles et Fantaisies illuminating powder and Tisse Ombre le Lune eyeshadow quad, underwhelming. The highlighter powder does look attractive, but in this case, I’m afraid it’s only looks that matter. The colour payoff is low, and it isn’t terribly flattering on the skin if you pile on too much product. Pale pink is always tricky especially on warmer skintones. So, I’d peg this one strictly for makeup collectors who will not be caught dead without owning it. As for the Ombre le Lune eyeshadow quad, while it feels soft and creamy and swatches easily, the shades are far too light and icy on skin. There is fall out and a lot of shimmer and is generally hard to use, and hard to find a practical use for it. Unfortunately for me, both of these items struck out.

CONS: Ombre le Lune is too shimmery with poor colour pay off, fall out and the shades are too light to be flattering, Perles et Fantaisies doesn’t show up very well and when it does has the potential to be too icy or ashy on warmer toned skin, Both are fairly pricey 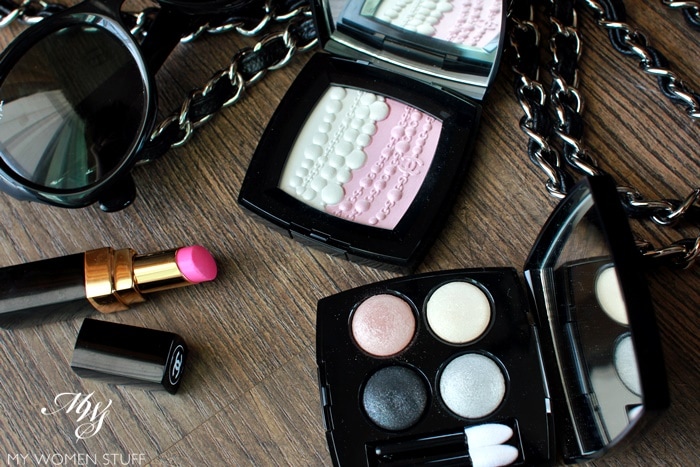 Tell me – Were you pining for this Perles et Fantaisies highlighter compact? Will you use it if you buy it or just admire it?

I know that some of you have already gone out and bought the palette, and I’m honestly not very surprised, because it is quite exquisite to look at. All those details in the embossing are something that you find only from the best makeup brands. But are you planning to use it? Be honest now! ;) You will be happy to know the pattern will hang around for a long time. So, if you haven’t already used it, USE IT! Then come back and tell me how you like it ;)

Disclosure: Featured products were press samples for consideration. Our commitment is to honesty and fairness. For review guidelines please read the disclaimer.

PREVIOUS POST: Mansur Gavriel Bucket Bag – The bag lust that would not die
NEXT POST: Your Say: Do you carry colourful bags or do you stick to classic, neutral colours?