There are some bag lusts that you think will die over time and with the rising hype…. and then they don’t. Ugh! Don’t you hate it when that happens?!

For me, this bag lust that refuses to die is for the Mansur Gavriel Bucket Bag. I’d spotted it online, not long after it first gained traction. But it was always (and still is always) almost impossible to get hold of one. Or at least, one in a colour that you really want. 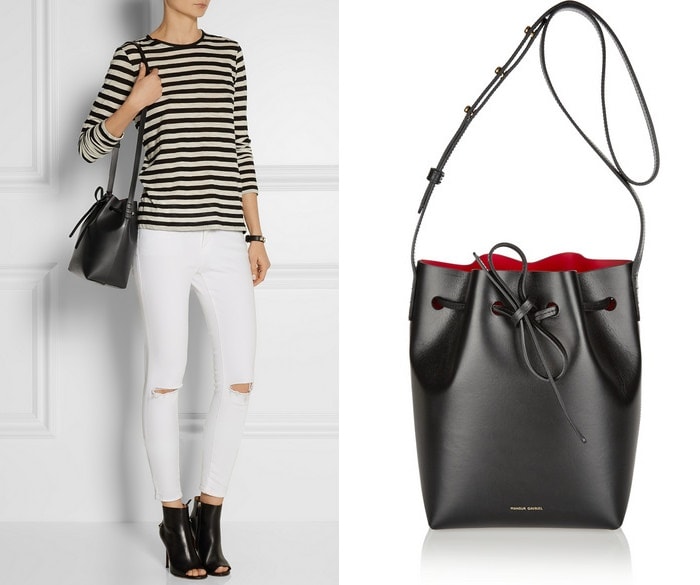 The one I’m most keen on would be the original version, in the smooth calf leather, with a black exterior and a bright red interior. That contrast of colours is eye catching and not often found. But this is also the one that’s hardest to get hold of, because this is the one everyone wants! 😛

The Mansur Gavriel bucket bag comes in 2 sizes – the regular and the mini, which is seen on the model above. Having had the luxury of pawing at both sizes on 2 different people lucky enough to snag one for themselves in recent times, I’ve decided that the mini size would be better for me. The regular one just feels a little too large.

But all that’s for naught, if I can’t get hold of it can I?! And that brings me to why I feel like my bag lust should just die already.

Aside from the reason that these full leather bags are fairly affordable (in the designer bag league) weighing in at US$595 for the regular size and US$495 for the mini size, the primary reason, I feel, why they are so highly sought after is because they are released in very limited quantities in limited locations.

Whenever the announcement goes out that Mansur Gavriel bags are going to be back in stock, they sell out online so quickly, even before you can switch on your computer to take a look. While brilliant marketing on the part of the company, I feel that this creates an artificial demand. And I dislike all these waitlist, limited edition crap, if I’m to be honest. I feel like a sucker putting myself on a the waitlist for anything, because it means that I too am fueling and falling for hype.

Sometimes, if you’re lucky enough to be in the USA, they’ve been reportedly sighted in department stores like Bergdorf Goodman and they are also reported to come in the more hardy saffiano leather, that is more scratch resistant, but not sold online. The original one is a scratch magnet, which is another reason I should talk myself out of it. 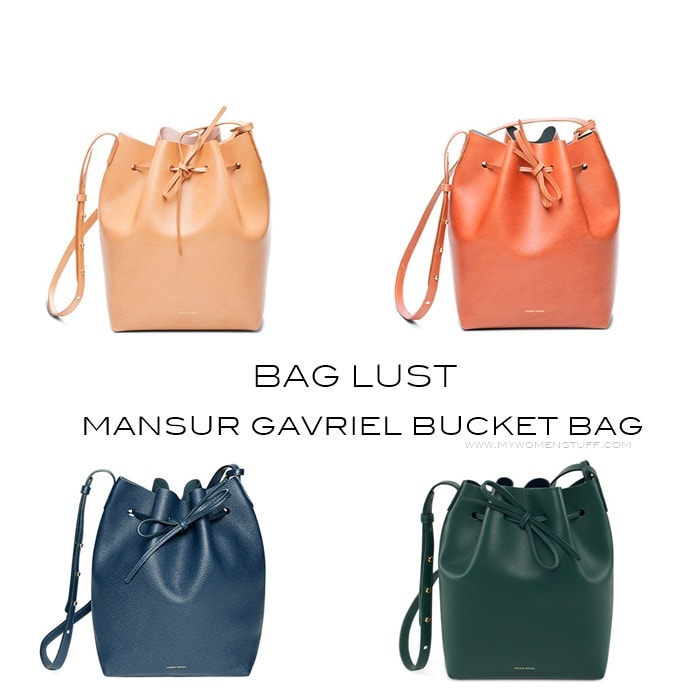 Yet, despite its shortcomings, the artificial demand, and the basic design, I still find myself lusting after one. Sigh…

Now, I own a bucket bag by a different brand, and really, I should be streamlining my bag wardrobe so I don’t own multiple similar designs. Bucket bags aren’t the most practical of bags to begin with. They are bulky due to the wide base, the opening tends to gape if you don’t tie the string shut properly, and it tends to be a messy black hole once you put your things inside.

Bucket bags also have a more casual vibe to them, which makes them perfect for weekends or casual outings, but less so for a more formal environment, or an environment where you have to look polished and in control, as opposed to rooting around inside a black hole of a bag, trying to find a pen. Oh yes, been there! LOL! 😀

But as I said, despite its shortcomings, I do still find myself irresistably drawn to it. Sure, I feel it’s overhyped as a brand and a bag, and the restriction of supply only pisses me off. But hey, a girl can lust, right? 🙂

I’ve been lucky enough to spot them a few times on Net-a-Porter but they came in sizes and colours I wasn’t keen on so I passed. If you too are in the market for one, the best place to stalk I’m told is the Mansur Gavriel website where a friend managed to snag one. I’d personally wait for it to pop up on Net-a-Porter because I know the shipping and taxes will be taken care of, but the sighting is rarer than that of the Tasmanian Tiger 😛

Are you drawn to bucket bags? Are you lucky enough to own one of these by Mansur Gavriel?

There are of course alternatives out there in different price brackets. I’ve considered them all, and some day, I’ll show you my picks from the different brands. But for now, I’m sitting here, seething at the fact that this one’s “Out of stock”, and trying to talk myself out of wanting one LOL! If you have one, TELL ME! Make me jealous! 😛

PREVIOUS POST: One shot of the REN Instant Firming Beauty Shot and instantly I’m in love!
NEXT POST: Leap for the Chanel Perles et Fantaisies Highlighter and Tisse Ombre le Lune eyeshadow or not?