Home » Interesting Discussions » All Aboard! Oh wait, We Have A Problem : 4 Things You Can Do During A Flight Delay

I spent last weekend traipsing around in the gastronomic heaven of Hong Kong. It was a short trip that was packed with and focused solely on food. And indulge I did! But before I could even get there, there was a little drama in my life. 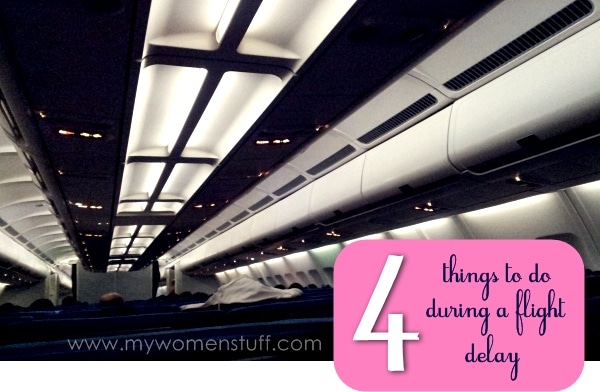 My flight heading out was delayed for over 3 hours. I flew a commercial airline so delays weren’t quite on my agenda. We were told of the delays only after we were all on board and strapped in and ready to leave. First, a tyre needed changing and then, one of the computer screens malfunctioned. My fear was that we wouldn’t be able to take off, but it was eventually fixed, and I got there and back in one piece.

But in those 3 hours on board the plane, I observed a few interesting ways how people passed the time during the flight delay and what you could do should you be caught in a similar situation.

Whatever you do, don’t panic. I witnessed a man who was flapping about, yelling into his mobile phone, yelling at the air crew who were trying to calm him down, and literally, just panicking. It was like watching a TVB drama and I kept wondering if a film crew might pop up at any moment. He insisted on leaving the plane and after about 2.5 hours he was allowed to. But we took off a few minutes later. I do wonder what happened to him.

Because this was an engineering fault, I chose not to panic. There was nothing else I could do unless I was a flight engineer and I was glad they picked it up on the ground rather than in in the air when I might just have panicked! So rather than make a fuss which doesn’t help and which would just elevate your blood pressure, I curled up in my seat with my book and took time out to catch up on my reading 🙂 When the instruction came over the PA system for the cabin crew to “arm all doors” I barely noticed that it had been 3 hours!

Pack a book or entertainment

For me, I packed my iPad. I’d loaded it with a book I’d been planning to read for a while, so it was a good time to start. If I had learnt to install movies (which I will … soon!) I could have watched a movie and kept myself entertained. I saw some families with children who had thoughtfully packed toys and books for their kids so there were no kids running up and down screaming their heads off.

What better time to catch up on your sleep? We were on board, and not going anywhere. The air-conditioning was on and it was generally quite comfortable. We just were on the ground. I saw a man snooze in the next seat and thought hey! That was a man who knew how to relax in the face of an emergency.

A friend of mine chose to strike up conversation with a man in a nearby seat who turned out to be from Hong Kong and who was a fountain of information for eating spots! He gave some recs but we only managed to try one, the others being too far away but which I filed away for the next time. In a confined place, when you have nothing to do and no one to talk to barring your seat mate, making a new friend doesn’t hurt and people are more willing to chat when you are both in a similar predicament.

Finally, not quite something to soothe you during a flight delay, but bring lip balm. Cabin air is very dry and I forgot my lip balm so my lips felt stretched to the point of cracking. Fortunately, we were kept well watered by the cabin crew so I didn’t experience cracked lips, but I will have to remember to pack my lip balm into my hand carry next time.

Have you been in a long and unexpected flight delay? Do you have your tips for what to do during such a delay? I believe this is the longest any flight I’ve taken has been delayed but because its an engineering problem, I’m really glad they picked it up while we were on the ground as opposed to in the air 🙂