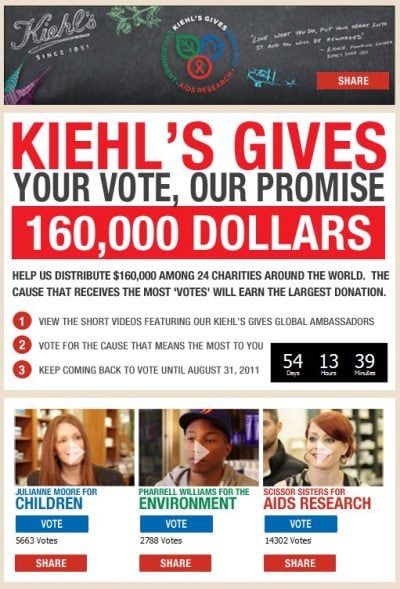 I bet you did not realize that Kiehl’s is 160 years old this year! The fact they are called Kiehl’s Since 1851 should be a dead giveaway heh heh…

To celebrate their 160th anniversary, Kiehl’s is giving out $160,000 to 24 charities worldwide. However, they are asking you to decide who should get the biggest share – Children, Environment or Aids Research. Locally, Kiehl’s pet project is the Yayasan Anak Warisan Alam  (YAWA) which is an environmental initiative where children are taught about the environment and its preservation. If you vote “Environment” its a vote for Malaysia 😉

So vote on the pillar that you feel most strongly for at the Kiehl’s MY Facebook (Kiehl’s Gives tab) and have a say where Kiehl’s birthday donation goes. This is probably one of the most meaningful votes you could ever cast 🙂

No Comments yet - START A CONVERSATION