Home » Eyes » Eyeshadow » The long awaited Urban Decay Naked Eyeshadow Palette review – Is it a must have?

Outside of MAC’s monthly releases, name one eyeshadow palette that has reached cult status to the extent of selling out multiple times online, and having the dubious honour of being extremely hard to find. So hard to find, some people are willing to pay extra just to get hold of it. 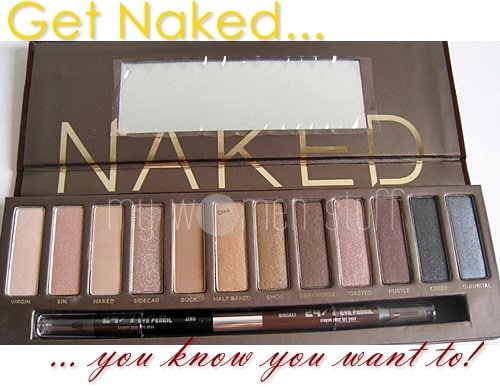 Its the Urban Decay Naked palette and I’ll be honest, I don’t know why people are paying crazy prices for a permanent item. Yes ladies, the infamous Naked palette is permanent so if you can’t get it today, wait. It’ll come back in stock and you can get it the next time. Few things in life are worth paying over retail for – please bear this in mind!

. UPDATE: Sephora Malaysia is open both at KLCC and Bukit Bintang and it stocks Urban Decay. The Naked Palette retails locally at RM175 but goes out of stock often.

Now that I’ve gotten that out of my system, Ladies, say Hello to Naked. A paletteful of neutral eyeshadows that has grown women salivating over it like it was a Naked Chippendale – which it is not 😛 If you aren’t a fan of neutral eyeshadows, you will not get the hype, and rightly so too. 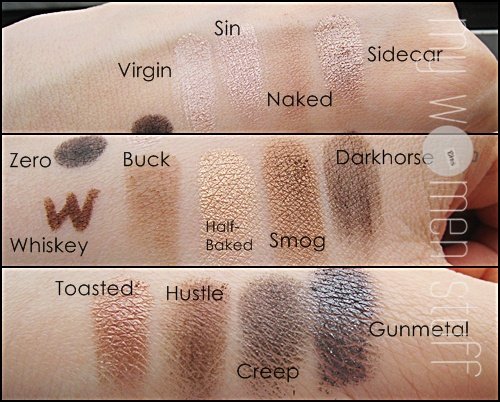 But we can’t deny it looks good. And its not all that pricey, everything considered. In the USA it retails at US$44 and in the UK its £27 while in Singapore, its S$73. ! If you’ve paid more than RM200 you’ve been swindled!

Many people have noted that the Naked eyeshadow palette is very versatile. I must concur. You can easily take it from subtle to smokey, day to night, neutral to dramatic, all with a flick of a brush. The only thing is, you are limited to 10 shades of brown and 2 shades of grey all tending towards the warm end of the spectrum. Perfect if you aren’t the adventurous sort; not so perfect if you like your colour.

Anyway, I did some quick looks to show you how versatile it can be. 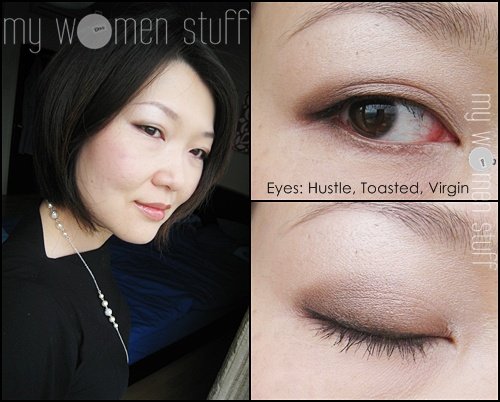 Simple work look with Hustle in the crease and on the lash line, Toasted as the main colour and Virgin to blend it altogether. Found it a little warm on my skintone. Paired with Chanel Pink Explosion on cheeks for colour. 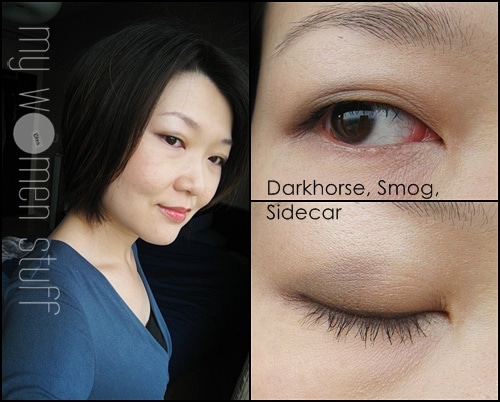 Another look I did for work – something a tad darker and this time I used the cooler toned colours. I think cooler tones work better on my skintone. 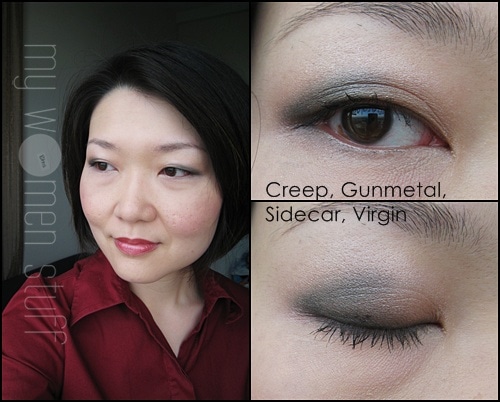 Decided to amp things up and Creep and Gunmetal are great for this one! I love how dark they are and when blended with Sidecar, I got something closely approximating my Nars Tzarine eyeshadow palette! Chanel Pink Explosion on the cheeks. I think I like this look so I’ll keep it in mind for future use 🙂

I think you get the general idea by now so these few simple looks will suffice. I prefer something darker for my eyes, so I will be using a lot of the Creep and Gunmetal. Maybe even Darkhorse.

I personally find Darkhorse, Sin, Sidecar and Smog a little warm. Its fine when I mix them in with the cooler darker shades, but on their own or mixed with Darkhorse or Naked, its a tad too warm so I did get someone asking why I looked so tired. Pity – they are lovely shades.

I’ve been using this palette on its own for about 2 weeks now and I can do a different look every single day, taking it from barely there to full on smokey eyes and it works every time. Its great that way.

Do you need this one? I’d stick out my neck and say No. I’d actually be content with a palette of just 4 or 6 neutral shades. 12 shades is just too much and because of that, the palette is a wee bit too big and unwieldy. Also I know many people love the tactile feel of the velvet cover but I do not. It is a dust and dirt magnet – woe betide ye who touches this palette with dirty fingers.

Notice I did not comment on the 24/7 Glide On Pencils included. Well, I don’t like them. Again, I’m in the minority. The reason I don’t like these is because they smudge on me, sadly enough. Zero is a lovely dark black and I guess if you wanted a pencil you can smudge, it works great but it does not stay put on my lids. Whiskey is a red toned brown so that is immediately red flagged as far as I’m concerned. Still, I’d use them because they are in the palette, but I wouldn’t buy the palette for these.

There is a mini sized Primer Potion included but I don’t find myself using it. You can read my previous review of the Urban Decay Primer Potion to find out what I thought of it. I think the quality of these Urban Decay eyeshadows in the Naked palette are good enough to stand on their own without the need for a primer.

Pros: Versatile user-friendly colours for everyday use, Good mix of warm and cool tones, Thoughtful addition of eyeliner and primer for an all in one palette

Cons: Palette is a bit too long, Velvet cover attracts dust and dirt, Colours tend to be a tad too warm

In fact, this isn’t my first Urban Decay palette. My first was from quite a few years back, also purchased in the UK. After using it, I decided I did not like UD eyeshadows because they were by turns too glittery, or lacking in pigment. I gave away my palette then. But I’m holding on to Naked, thank you very much 😛

You don’t NEED this palette. No sirree! But I bet you WANT it anyway, doncha? 😉

Urban Decay Naked eyeshadow palette retails at US$44/ £27 / S$73 respectively. Available at Sephora for RM175 and this was purchased at House of Fraser, London.