Here’s a product I’ve been wanting to share with you for a long time (but always put it off) and now that I have the time, I’d better tell you about how much I like it 🙂 Fittingly, its the FIFA World Cup season and with the Cup being hosted in South Africa this year, what with time differences, we’re having to stay up late or be up early in the wee hours of the morning to catch the matches. Eye bag and dark circles alert!! 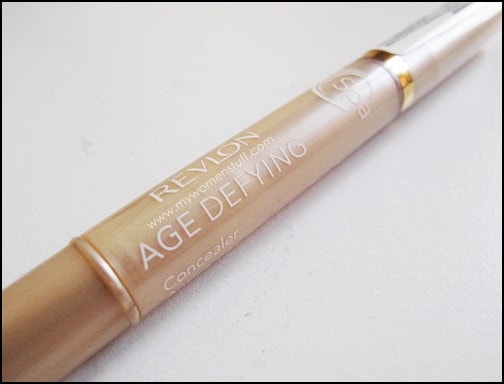 The Revlon Age Defying Spa Concealer isn’t new. It came out sometime in 2009 if I recall correctly and I got it later in the year. What it is is a liquid concealer that comes in a brush pen form. Now, unlike the YSL Touche Eclat, I’ve had this one for many months and it does not stink. What’s up with the YSL one?!

I do not have very severe dark circles so this one covers well for me. I don’t use it for blemishes or pigmentation though. I only use it for undereye concealing and brightening and it works well.

The texture is not very thick and it does not settle into lines which is great. I twist it about 2 turns, swipe the brush on the undereye area and blend it with my fingers. I cannot say it brightens, because it does not. However, once you cover up any darkness, your eye area looks brighter anyway so for me I’d say that it does help make you look less tired. 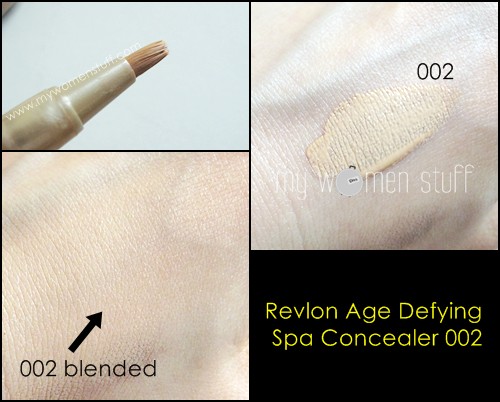 I have no complaints about this one. It works well, I like it and its affordable. Plus, it lasts a while. I’ve had mine for months and it shows no sign of finishing yet. I use 002 which is a perfect match for me. The picture shows it looking a little whiter than it really is. In reality its more yellow which might seem scary at first, but once you blend it out, its alright.

Pros: Light formula, Does not settle into lines, Medium coverage is not too thick, Portable, Affordable

I believe it retails for about RM40 but you can easily wait till it goes on sale before picking it up. It does not have brightening properties with those little sparkly bits that brightening concealers have.

Tip: You can use this to cover redness on your cheek area too (although it might not work as well since its not full coverage) but it will help reduce the look of redness or acne marks. Dab on some concealer, pat it in to blend, dust some powder over it and its pretty much all concealed.

Don’t apply too much or it can be a little thick and then you won’t like it because it’ll settle into your fine lines. Have you tried this?

PREVIOUS POST: Longchamp Le Pliage Totes : Talk me into it or out of it?
NEXT POST: The Magic Trio: Benefit Creaseless Cream Eyeshadow in Strut, Skinny Jeans and Birthday Suit