I’ll say this for the Dior Parisienne Lights palette for Spring 2009 – its a palette for those who like sheer colours. So, if you prefer something more pigmented for eyeshadow, instead of light sheer colour, you might want to stop reading now. 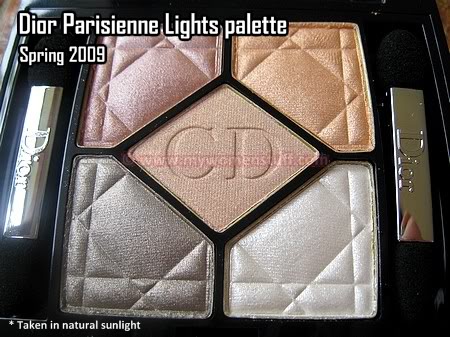 I loved the look of the limited edition Dior Parisienne Lights palette that was released for Spring 2009. It looked so pretty in the palette. However, I was in for a surprise when I swatched it.

The colours were all light and sheer. It reminded me of an old Dior palette that also had sheer light shades – Moonray I think its called. They were pretty though. So, I was a little disappointed when I saw that even that lovely taupe swatched as a sheer shimmery taupe-grey. It took me a lot of tries to get the colour to show up in the photos – its that hard to photograph.

But since this was the only eyeshadow palette I had for a whole week, I decided to make the most of it. I’m glad I gave Parisienne Lights a chance, because despite its sheerness of colour I like this palette!!

The Dior Parisienne Lights palette is part of the Iridescent eyeshadow quints collection so you can expect an iridescent tone rather than outright shimmer. What this also means is a subtle understated shimmer that catches the light at different angles and which can enhance and open your eyes.

I changed my regular technique of applying eyeshadow and started with the darkest colour – the taupe – right on the outer edge of the eye up to about 1/3 of the way towards the middle. Then, I picked either the pink or the orange and started from the inner corner of the eye, shading out and blending with the taupe, layering for colour. What this gave me was a hint of colour and iridescence on my eye lids without too obvious colour. Line and mascara and you are ready to go!

I know what most of you are thinking – “There’s hardly any difference in the pictures!” and you are nearly right. The Dior Parisienne Lights quint does not photograph well for purposes of showing off. In real life, it has a much more subtle delicate effect that at once brightens the eye lids and opens the eye area and makes me look more awake and sophisticated than I feel. Its hard to get that to show in pictures. Pair this look with a bright red lip and you get instant old Hollywood glamourpuss. Lovely!

As the colours are light it might work better for girls with lighter skin tone. If you are medium toned to tanned, it might just show up as shimmer. Also, I used my fingers for maximum effect. A brush would not do much to pack on colour.

Sheer colour means there is less chance of a mistake and it is easier for those who don’t feel confident enough to use eyeshadow. It also means you get away with using colour and shimmer in even the most serious of offices! The colours are all very blendable and you can use 1, 2 or 3 colours at your choice and discretion. I used 2 most times – taupe-pink, taupe-peach, taupe-white. I liked all the looks because they were subtle and perfect for the sorts of functions I was attending, where subtle makeup worked much better than strong colours. It also went a treat with strong coloured clothes like red, so you don’t have to fear a clash of colours. Sheer iridescent colours also mean that if you do make a mistake it won’t show up that obviously. 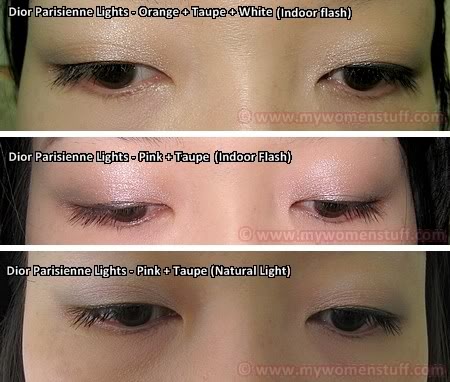 Despite the sheerness of the colour, if you examine your eyelid closely you will notice that the colour is very smooth and evenly distributed and it lasts. I don’t have oily lids so the eyeshadow lasted all day on me without a primer – in humid tropical weather. Used with a primer or base, the colour is slightly more intense.

How does this compare to the Kanebo Coffret D’or Shine Accent eyes for Spring 2009? I feel this Dior quint surpasses the Coffret D’or in terms of quality because it feels and applies smoother and the shimmer is not all that obvious. The Shine Accent palettes are way more shimmery and has less subtlety.

So, as I said above – if you like strong pigmented colours, or are tanned you will dislike the Dior Parisienne Lights palette because it is so light. But if you want something mistake proof and work friendly, Dior Parisienne Lights is your friend. It retails at all Dior counters for RM187 a palette. Expensive at a glance but considering you get 5 colours in the bargain, it works out pretty decent. This is the first Dior palette I’ve owned from the Iridescent eyeshadow palettes and the first light coloured palette I own. To my surprise, it isn’t all bad! Haha… 🙂

PREVIOUS POST: The Body Shop Moroccan Rose Collection – Limited Edition
NEXT POST: Could you be allergic to Organic Products?