Home » Interesting Discussions » Confession time: The Konmari Method of tidying wasn’t life-changing nor magical for me

In 2015/2016 I came across a book that was a bestseller – The Life-Changing Magic of Tidying by Japanese writer Marie Kondo. In it, she explained the various methods in which to help you declutter and organize your living space, and by extension, your life.

It’s also known as the “Konmari method” of tidying/decluttering/organizing, and it took the world by storm.

I had to see what the fuss was about, so I bought the book and read it cover to cover. I had also just moved house then, so it was quite timely. While I’d thrown out a lot of stuff during my move, I still had a lot to go through. I decided to see if the Konmari method would help me. 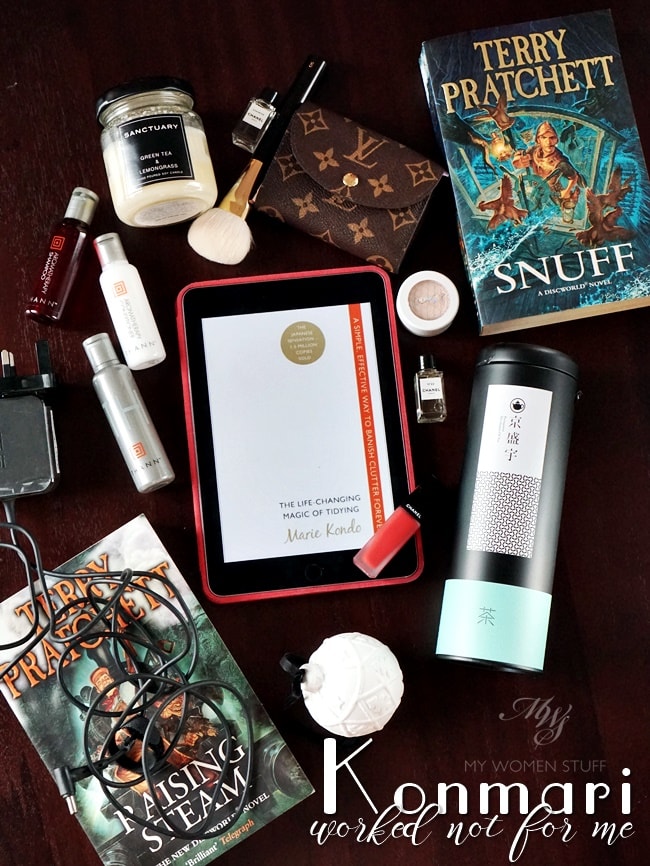 The key tenet of the Konmari method is to ask yourself if an item sparks joy. Marie Kondo details in her book how you should pile EVERYTHING you own that you’d like to slim down or declutter e.g. all your clothes or books or maybe even beauty products… LOL! 😀 and then pick each item up and ask if it sparks joy. Does it make you happy? You aren’t supposed to work room by room, but category by category.

If it makes you happy, it stays. If it doesn’t, or if it used to bring you joy but no longer does, it should go.

The problem is that a lot of things I own bring me joy, even if I don’t use them for a while. It’s usually the reason I buy them in the first place! LOL! 😛 I was standing in my kitchen, holding a plastic box, asking myself if it sparked joy, and the answer was that it did! Yes, it’s just another square plastic box of indeterminate size, but alongside the Konmari method, I also understood Murphy’s Law, that dictates that the moment I toss out that container, would be the moment I needed one in that exact size 😛

Ok, so I’m a hoarder and packrat and maybe that’s what was stopping me from graduating Marie Kondo’s Konmari school. To my credit, in the process, I did manage to weed out quite a few items that were too old, broken, didn’t fit, or no longer served any purpose. I suppose you could say that they no longer sparked joy.

But a lot of it did, and so I found myself reshelving at least 80% of my kitchen stuff. Sure, I may not use the coffee press, now I have a Nespresso machine, but sometimes, coffee grounds come my way. It’ll come in handy… one day LOL! 😀

Konmari Fail #2: I have the space

I think the Konmari method works best for those who have a very limited space in which to live. If you live in a very small apartment, or room, and want to maximise your living space, and not have to trip over clutter everywhere you walk, you really should pick up this book or at least read some of the tips shared. It can be life-changing.

But I realised, as I went on, that I had a lot of space with which to work with. There are cupboards that aren’t even used, because I evidently don’t have as much clutter as I originally thought (time to remedy that! LOL! 😀 ) I don’t live in a huge space, but it’s large enough that I can keep away my clutter from sight… if I wanted to. The fact that I’m lazy and tend to let my clutter build up is entirely my own fault!

I have however, adopted the method of picking up after myself as I finish a task. Believe you me, it’s not something I’m good at, but I’m working at it!

Konmari Fail #3: I can’t pare down my beauty products 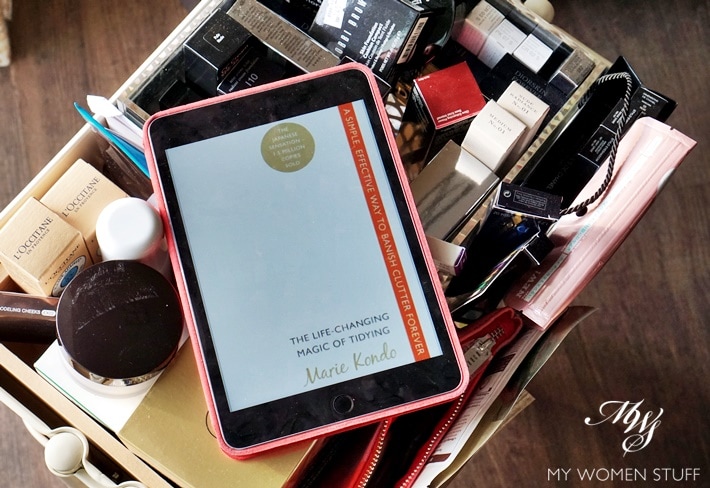 I suppose I’m not your regular woman on the street and that’s why I’m faced with this dilemma. If I could have a cupboard for just my beauty products alone, I’d have one. Oh wait I do, but even that is overflowing LOL! I buy too much crap, as I keep telling myself, but I use them and I guess that’s alright right? 😛

I do try to keep my beauty products orderly. It doesn’t always work, as I will go a little nuts after a while, but every now and then, I steal 2 hours to myself and clean and clear my dresser and surrounding areas, so I can actually SEE what I’m using and not just rummage around the bottles and tubs littering its top, going by feel.

Konmari Fail #4: I love my books

Marie Kondo isn’t a big fan of keeping books. According to her philosophy, old books and papers have served their purpose once you read them and should be removed because they “no longer spark joy”. I suppose she’s not a bibliophile like I am 😛

While I admit that there are some books I buy, read and never re-read; or books I buy and struggle to get through, I like having my books in my bookshelves. They lie 2-3 books deep sometimes, but they spark a lot of joy. How then do I toss them out?

Ok to be fair, there are some books I’ve been wanting to get rid of, and I will likely donate them to some book exchanges that I see happening around town. But there are some books I read and re-read over and over because they bring me so much joy. The books of the late Sir Terry Pratchett form a large part of that number and they truly bring me a lot of joy… and unladylike snorts of suppressed laughter 😀

I guess with the rise of e-books and e-readers, there is now a lot of sense in this tip to get rid of the hard copies. Books do take up a lot of space and moving them is quite a bitch. So heavy! But I can’t read off e-readers and I love the feel of a paperback in my hand, so physical books it is for me! 🙂

The Konmari method isn’t for everyone

While I don’t LIKE clutter, I’m not one to lead a minimalist lifestyle. I like my “things”, and like many people who own “things”, I usually know where to find them amidst the perceived clutter. My living space isn’t in the least bit instagram or pinterest-worthy. It’s serviceable but otherwise has no artistic designer touch to it. I have too many throw pillows on my couches and maybe even too much furniture in my space. I could do better, I know and I try very hard. But my space is comfortable, and I’m not exactly tripping over things willy nilly, nor feeling oppressed by having “things”. Occasionally, I go into a bit of a frenzy and throw things out, and declutter visible space, but that’s because it clears my head – never underestimate the power of feng shui 😛

There are aspects of the Konmari method that work for me, that I’ll share with you another day. But in the main, I’ve failed to lead a clutter-free lifestyle as envisaged by Marie Kondo, who boasts that those who follow her method will never relapse. Oops! I guess I just never got started! 😀

Have you tried the Konmari method? Did it work for you?

Perhaps the getting rid of books tip was what resulted in my getting rid of this very book, which is why it’s not in the photos haha! 😀 Well, not really, because it’s being lent to a friend… who probably doesn’t really need it 😉

PREVIOUS POST: The big test is whether the brand new Rouge Dior Couture Color collection is a Miss or scores a full 999
NEXT POST: Whether in cool dry air or in hot humid weather my skin enjoys the La Mer The Revitalizing Hydrating Serum