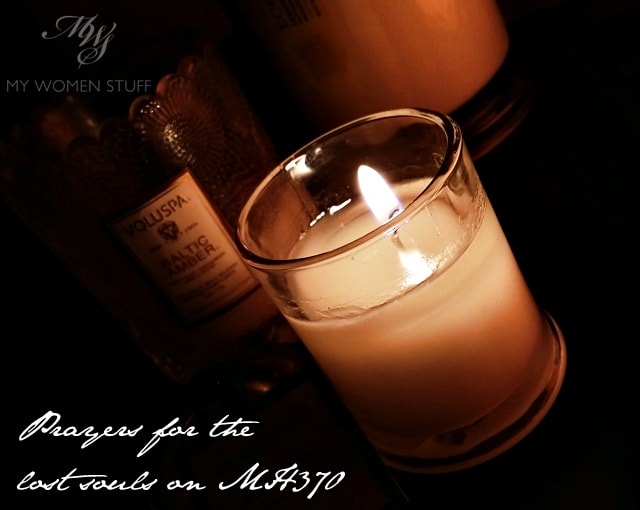 I had a post scheduled for today. It was a light-hearted piece that I’m sure many would have enjoyed discussing. But in view of the devastating news last night about the missing MH370 plane, I decided to shelve it for now. It didn’t feel right.

I’m not usually one to wear my heart on my sleeve. When the plane first went missing on 8 March 2014 I thought about it and decided not to write about it. This is a happy place and most of you come here to find a happy place. Besides, no one knew any better what had happened and I chose to say nothing.

Over the weeks, in a multi-national effort, and in what I believe is the longest search mission ever conducted for a missing plane, our hopes were raised and then dashed with no real conclusion either way. Until last night.

As many of us already know by now, it was announced last night by our Prime Minister that following information from the UK Air Accident Investigation Board and based on new calculations of flight path, the conclusion is that Flight MH370 flew along the southern corridor and that its last position was in the middle of the Indian Ocean, west of Perth.

It is a remote location, far from any possible landing site and it was concluded therefore that that was where the flight ended. Multi-national search teams have already been combing the area and until conclusive debris or the black box is found, we know little more than this – that the flight ended where it did.

While I believe this raises many more questions than it answers, it also provides some form of closure. Many of us were praying for nothing short of a miracle even if deep down we guessed at the truth.

This has been a tragedy that has hit close to home for me. While I did not personally know anyone on the flight, this had involved my national carrier; and my country, with all its failings and foibles, has been thrust into the international limelight to face a situation no one would wish on their worst enemy. Yet, even as I can imagine the theories, fingerpointing, ranting and criticism begin, let us remember that on that ill-fated flight MH370 were 239 people – passengers and air crew.

I’m not a deeply religious person but I will be lighting a candle at the temple and saying a prayer for these 239 lost souls and their families who must be heartbroken and devastated at this piece of news. Whatever your beliefs, I urge you to just pause for a moment, observe a minute of silence and thought, or spare a short prayer for these 239 missing people and their families.

Above all, I urge also that in the course of sharing news and thoughts on this, be sensitive and be considerate.

God bless and Rest in Peace.

Note: I usually reply to all comments but in this instance, I think there is little I can add to our prayers and what everyone has shared below. Thank you everyone for sharing in the grief and empathizing during this dark and emotional time of our lives.

PREVIOUS POST: Getting Flirtatious with the Revlon Lacquer Balm and Comparisons with Matte Balm and Balm Stain
NEXT POST: RMK UV Powder Foundation : An interesting powder to cream finish with SPF30