First, we had the Revlon Just Bitten Kissable Balm Stains that had people clearing out the Revlon counters. Then, a few months later, it was the Matte Balm and again, whoosh! The displays were cleared out faster than you can say “Revlon has done it again!”.

Rounding off the trio is the Revlon Colorburst Lacquer Balm. Ostensibly therefore, this is one to pacify the crowd who prefers having a shine on their smackers. 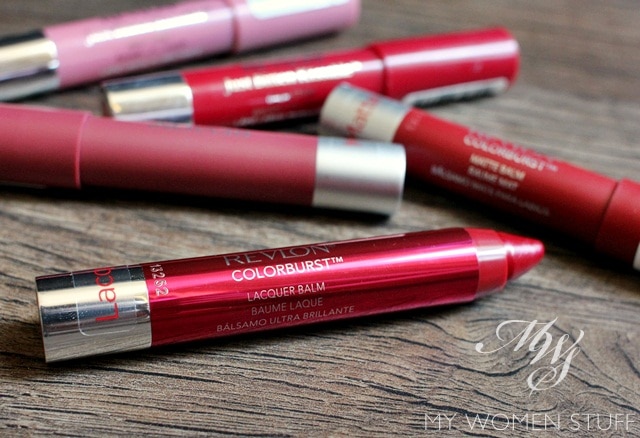 As the name implies, the Revlon Colorburst Lacquer Balm is a high shine lip colour that gives your lips a lacquered finish while feeling comfortable, like a balm. To stress this point further, the body of the lip crayon sports a shiny surface, and the colour of the body reflects the colour of the lip colour, which makes it easy to pull out the exact colour you want quickly.

I spotted these at a pharmacy a while ago and tested them at the counter but I was not impressed. Most of the shades available, while indeed giving you that high shine and lovely slip expected of something called a “Lacquer Balm”, sported glitter and sparkles and boy! I’ve outgrown all that 😛

One or two weren’t as blessed by the glitter fairy and thankfully, Flirtatious is one of them. I’ve got some swatches and thoughts on this but more importantly, I’ve also decided to give a quick comparison with the Just Bitten Balm Stain and the Matte Balm just to point out the similarities and differences of each so settle in for a bit of a read 🙂

The colour I have is Flirtatious, which looks to be a rather bright red in tube. My kind of colour! 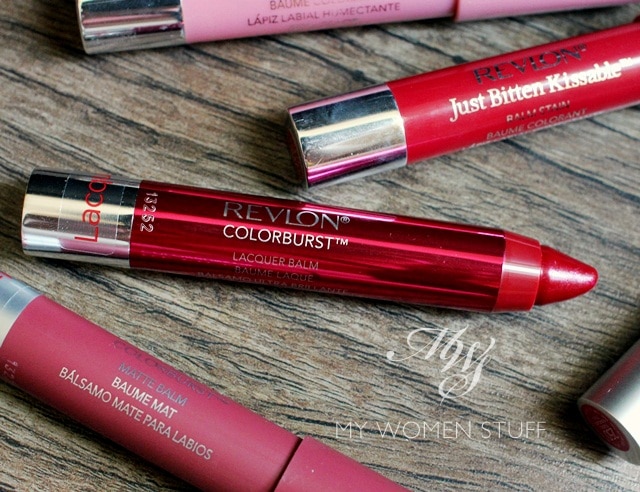 If you look at the crayon bit, you may notice the sparkles which are very obvious. When I wear it however, I find that the sparkles in Flirtatious are small enough so they reflect the shine and gloss but they don’t sit on your skin. That is very important for me, because I just don’t do glitter anymore. If I were younger then yes, it would pass as youthful exhuberance. At my age, it just looks like I’m trying too hard 😛

Here are some shades I swatched at the counter a while ago. I can’t recall the colour names now, but I wanted to show you the sparkles and chunky glitter in some of the colours. 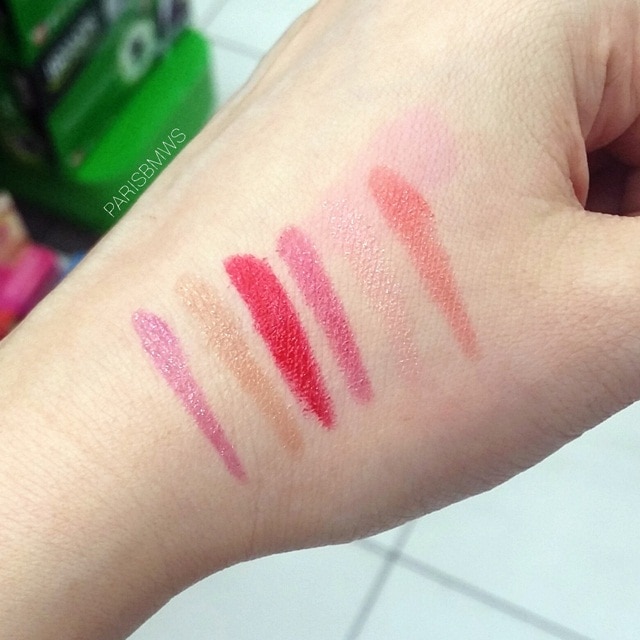 So thankfully, with Flirtatious (4th from left), I can sport a flirtatious pucker without looking like I just raided the makeup kit of a teen. It does have that minty taste now associated with all the Revlon Colorburst balm pencils, and although I’m still not a fan of it, I let it slide.

The longevity is pretty good as far as I’m concerned. It does slip off a little more easily than the Just Bitten Balm Stain and the Matte Balm, but it’s good enough to last you through the morning. I do find the colour not as intense, which I attribute to the shine and balm factor. You will see a swatch further down of Flirtatious on my arm (and the colour looks so different as opposed to wearing on my lips!) but here’s how it looks when I wear it. 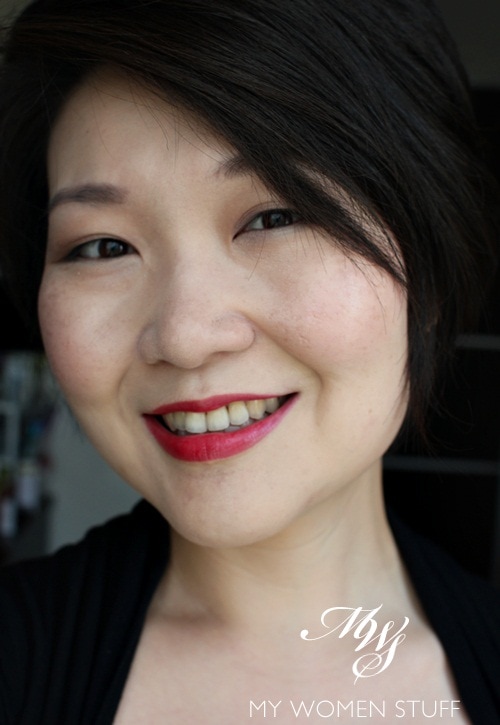 The colour glides on evenly and with a lovely shine. Flirtatious is a bright red with a slight blue base so find it quite flattering on, especially when you keep the rest of your makeup fairly neutral as I have been lately. Not much mood to put on colour, but give me a bright lipstick and I’m set to face the world and slay dragons! 😀

But despite all this, I don’t know. I’m not feeling this one y’know. I don’t know if it’s the texture but I just don’t feel as much love nor rave for the Lacquer Balm as I have for it’s siblings. I was raving over the Balm Stains and the Matte Balm truly floored me, but this one… hmm… meh. That’s all I feel. Meh.

The Revlon Colorburst Lacquer Balm is a high shine lip colour in crayon form. I don’t find it drying and it slicks on well pigmented and delivers the shine as promised. I do however find that with shine comes sparkles and chunky glitter in some of the shades and I’m not a fan of that. On an overall basis, I’m not taken with the Lacquer Balms and I much prefer either the Balm Stain or the Matte Balm both of which I feel are more unique and interesting and truly deserving of their raves. The Lacquer Balm is ok. Nothing to really write home aboue.

Cons: Some colours have chunky glitter

I contemplated a separate post for this but figured I might as well quickly run down the similarities and differences in the 3 different texture of the Revlon lip crayons available so far. 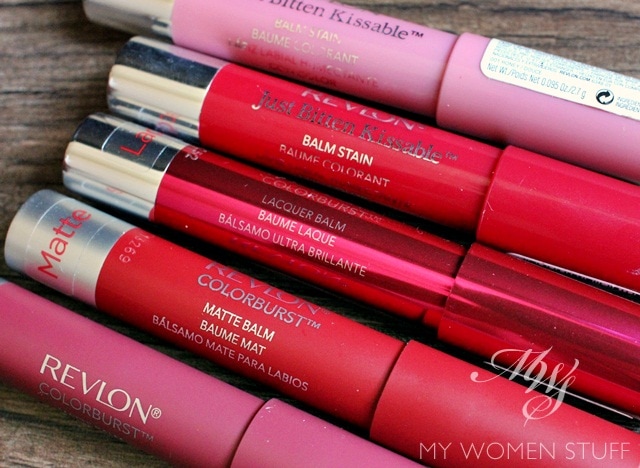 In terms of packaging they’re all packaged the same way, in a twist up lip crayon style packaging, that is very portable and easy to use. The colours on the body and cap reflects the lip colour in tube, and the different textures sport different looks so it’s really easy to spot the Matte Balm from the Lacquer Balm, for example. 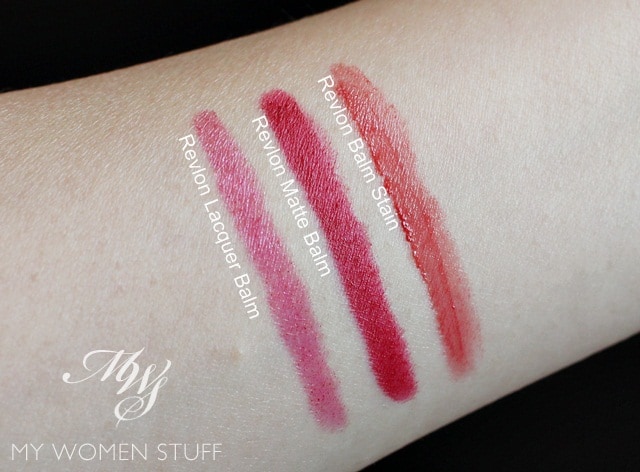 Flirtatious Lacquer Balm swatches a berry on my arm but as a red on lips. Very strange!

In terms of texture they all sport a similar balm base so it glides very easily on skin. In terms of how they fare:-

All three have a minty taste and scent although I feel that the Lacquer Balm is the strongest and lasts the longest. As you can see, the Lacquer Balm sort of falls in the middle of everything which might explain why I feel it so be so average and unexciting. If the Lacquer Balm was a colour, it would be beige 😛 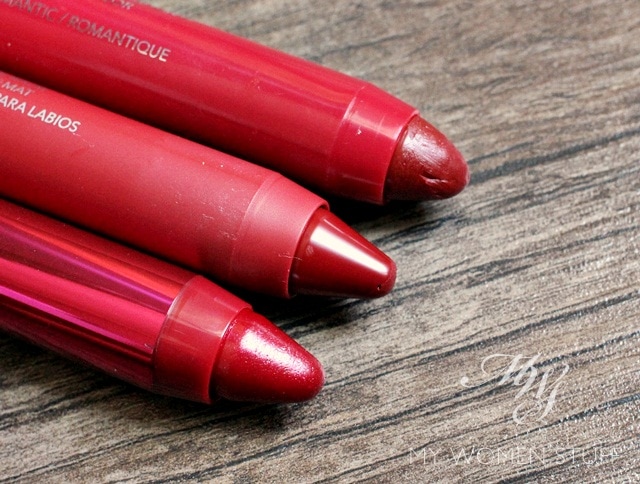 My personal preference would be for the Matte Balm first followed by the Balm Stain. As far as the Lacquer Balm goes, I’d take it or leave it. Mostly, I’d leave it because it just isn’t as special nor as spectacular as the Matte Balm. For someone younger, I think they’d prefer the Balm Stain or the Lacquer Balm as they both are a bit sheerer in terms of pigment and give a nice shine to the lips. For someone older like me, the Matte Balm is one of the best matte lipsticks I’ve tried in a long while that I’m happy to purchase and wear over and over.

If you’ve been curious about these, I hope this brief run down helps you decide 🙂

Do you like the Revlon Lacquer Balm? Have you tried all 3 textures and if so, how would you rank them?

I’m curious to know if you like the Lacquer Balm, since I’m so ambivalent about it. I just didn’t feel it lived up to its potential. But I personally love the Matte Balm but then it could also be because I haven’t had a lot of luck with matte lipsticks 😀 You?

Disclosure: Featured product was a press sample for consideration. Our commitment is to honesty and fairness. For post guidelines please read the disclaimer.

PREVIOUS POST: Empties for Origins samples and Earth Month awareness with Estee Lauder Group of Companies
NEXT POST: Prayers for the lost souls on the ill-fated MH370