Home » Fashion » Shoes » Your Say: Do you have a quick solution for breaking in shoes? How patient are you with a pair of shoes that bite? 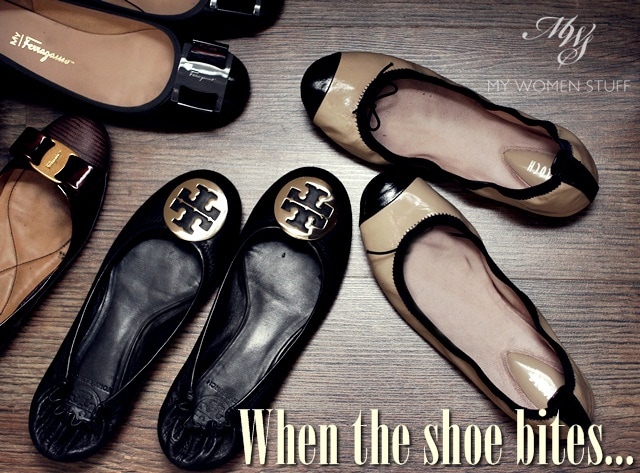 I was wondering about this in the past few days, as I pattered about in my flats. I have a newfound love for a good pair of flats by the way. Finding a good one that I love has been pretty much trial and error but knowing that I have them is a great feeling because they go so well with anything! A little casual of course, but hey, if I can get away with it… 😉

So anyway, I have 2 pairs of flats that have a tendency to bite my feet, especially at the heel. I find flats do that a lot. I usually end up with a blister when the shoe rubs my heel raw, and I’ve lost count of the times when I’ve had to hobble around because my shoes are giving me blisters. Serves me right for attempting to walk a lot in new shoes, but sometimes I do that, as a means of breaking them in. No pain, no gain 😛

I figure, if I wear the shoes around a lot, they’d break in more quickly. Sometimes it works, often it doesn’t. Do you have a quick fix for breaking in new shoes, or for shoes that bite?

I usually do a pre-emptive measure by taping a plaster (aka band-aid) on my heel before I wear a new pair of shoes. This way, even if the back of the shoe bites my heel, I won’t develop a blister, nor will I end up suffering. The problem with this trick is, sometimes, it’s my toes that get rubbed raw instead and I never know which toe it will be, so I can’t tape up every one of them! 😛

Another trick I was told to try was to rub some candle wax around the back of a new pair of shoes to prevent it from biting your feet. I tried it once or twice. It might have been a coincidence, but it seemed to work. Not for very long however. Once the wax wore off, ouch! 😛

But I suppose you could say I’m a bit of a glutton for punishment. If the shoe bites me the first time, I stop wearing it till the blisters heal. Then, I get back at it again. And again. Until the shoe is broken in and it’s no longer a problem. It can turn out to be a long, painful process though.

I still haven’t been able to break in the Tory Burch Ballet Reva flats properly though. It might be the ruched, elasticated heel area that causes the chafing against my heel. I don’t personally recommend this pair of shoes, no matter the raves. I’ve had them for almost 9 months and it’s only now starting to ease up a little with the blisters. The elastic at the heel is just too tight and the ruched material is rough against your skin. The leather is lovely and soft and I do like the rubber base which has lovely grip, but the sizing is a pain (go up at least half to a full size) because if it fits, its a bit tight (elastic at the heel) and if you go up a size, the elasticated feel will move and rub against your skin more and give you blisters. Better flats out there, in my view.

The Bloch ballet flats on the other hand, I almost wrote off the first few times I wore them. There are nice cushioned bits at the heel area and the shoe is soft and fits well to the feet (size up half a size for better fit), almost as if it is moulded to your feet. Bloch makes pointe ballet shoes – as in actual ballet shoes worn on stage by proper ballerinas – so I think part of the technology has been transferred to their street shoes. I do find that the sole on the ballet flats is a bit thin and it is leather so it can be slippery. The bit at the back is also a bit high, so it bit my feet something awful! I swear I was ready to bid them goodbye after about 5 months.

But this week, I have been wearing them a lot and they seem to have lost their bite. The shoe fits like a glove, I walked quite a distance in them (keeping some plasters handy in my bag while I did so) and deliberately wore them as much as I could. No problems! I think I’ve won 😛

But if you have a quicker way of breaking in new shoes, I’m all ears!

Are you patient breaking in your new shoes? Do you have any tips to break shoes in more quickly?

I am quite patient actually. Most of the time, its because I’ve already paid for them and we don’t have a return policy in stores here on worn items so you can’t just return it and say “It bites, sorry!” So I’ve had to work around it. Most of the time, once its properly broken in, its comfortable but it can take a while. Thus far, only the plaster on heel trick works for me. Any other tricks you know of?

56 comments ... Read or JOIN THE DISCUSSION