You know Christmas is upon us when you see gorgeous items like this pop up in promotional images and eventually, at counters. 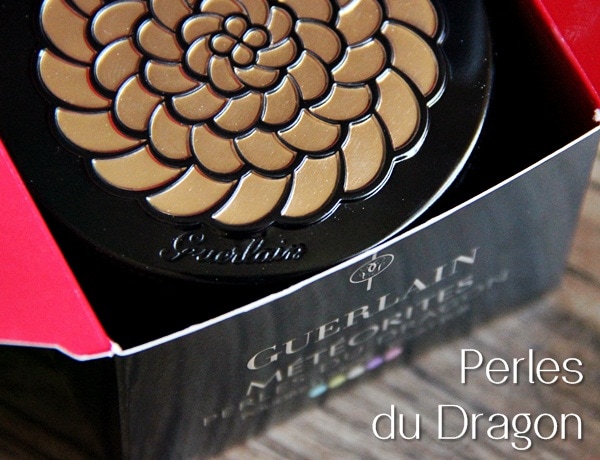 Tell me your heart didn’t stop a beat, when you spotted that beautiful gold on black lid. In terms of packaging, my eye was set on the Guerlain Perles du Dragon Meteorites the moment I knew of its existence. Hello! Black enamelled tin and gold lid inlay? Just take my money already, Guerlain! Take it all! 😛

Guerlain’s Christmas 2012 takes on the Orient with their Liu collection. Liu is one of the fragrances in the Guerlain line up, and is an Asian heroine in Puccini’s opera, Turandot. What you can expect is lots of reds and golds which is very Oriental (read: Chinese. Chinese love red and gold because its auspicious and prosperous. I love red and gold LOL! 😛 ), and at the same time, very fitting of Christmas as they are very festive colours.

I only have the Perles du Dragon to show you for now, but I also have my eye on the Liu Calligraphy Eye and Lip palette and when I get my grubby paws on that one, I’ll tell you about it 😉 So onward and unleash the Dragons!

Do you remember the Pucci Meteorites from the Summer 2012 collection? Remember the box and how they even printed the inside of the box with the signature Pucci print? Well, none of that here. What you get instead is a very striking red interior. 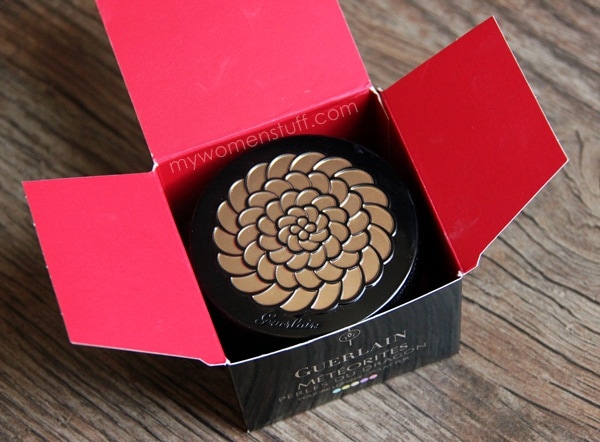 Open the box, and nestled within is the mysterious signature black tin. Unlike the Pucci Meteorites too, the Perles du Dragon goes back to the regular Meteorites tin cover, with the camellia flower design on the top. 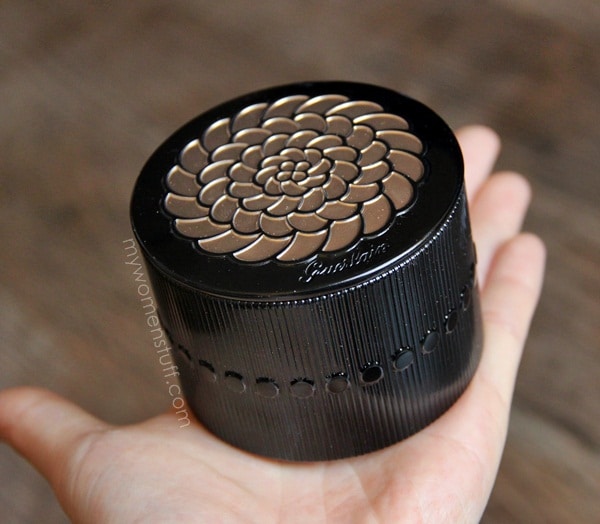 This is the regular Meteorites tin painted black and gold so nothing unusual there. The inside is a black sponge, which is similar to that found in the Perles de Nuit Meteorites from Christmas 2011. I wasn’t terribly keen on it then and I still am not terribly keen on it, because the pearly powder shows up against the black and not very prettily either.

However, I have noticed in a new purchase of Teint Beige, that the permanent tins now also sport a sponge insert. The Teint Rose one I bought when the new tins were lauched sports a puff, like the ones found in the cardboard cases. I’m sort of sad to see the puff go – sure sign of cost cutting 😛

Griping aside, here’s what you get when you open the tin and reveal the Dragon pearls, as I’ve taken to calling them. 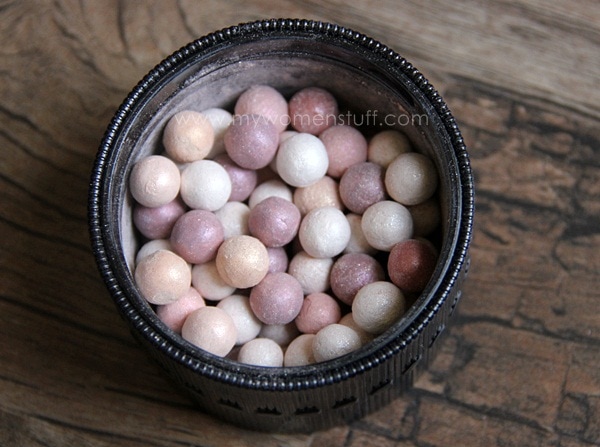 The pearls this time, are a pale lot with 5 colours, and I was initially a little afraid of seeing the pink, rose and purple powder balls in there. My concern was whether they might apply too pink on skin. Would this be relegated to that of a shimmery blush?

Here are the powder balls I found in this tin – Rose, Pink, Purple, White and Gold. The resulting effect from having all the colours meshed together, gives you the whitish powder you see on the sides of the tin in the picture before this one, and the sponge puff in this picture. I won’t even bother swatching this for you, lovelies. I tried, and it barely shows up and honestly, its one of those things you have to see and try for yourself.

Apparently, there are 6 shades in there, but I only see 5 in mine so I either mistook the beige and gold, or I’m cross-eyed 😛 Eitherway, it doesn’t matter because when you mix the colours together, what you are supposed to get is a transparent powder that illuminates, brightens and evens out skin. Use it as a finishing powder, after you have completed your base.

I personally found that the Perles du Dragon applies on my skin a bit cool, and a bit whitish. Its hard to explain, but although it evens out my skin and gives me this surreal glow and air-brushed look (even under harsh fluorescent lighting, mind you!) I find it cools down the tone of my skin somewhat. It does make my skin look brighter though. Perhaps what I need is a bit more gold to warm up the tone. And this is where I hate to be the bearer of bad news, but the Perles de Nuit from last year took the cake. The candlelit glow from within generated by that tub of Meteorites is second to none I have ever tried.

Oh, and if you are afraid of shimmer, do be warned that the Perles du Dragon does appear a bit more shimmery. It might be because its the Christmas edition so they tend to be more festive. Perles de Nuit was similarly more shimmery, but the Pucci one wasn’t.

Can I use the pink balls as a blush? Well, I suppose if you isolated the pink and purple balls you could but I otherwise wouldn’t bother. Just use it as you would your regular Meteorites i.e. swirl your brush in it and apply on skin, then step back and admire yourself in the mirror 😉

The Guerlain Meteorites Perles du Dragon is the limited edition Meteorites for Christmas 2012. Part of the Liu collection, it carries the Liu black enamelled packaging contrasted with gold in the signature camellia on the lid. The packaging is very beautiful and it is tempting to buy it just for that! The powder however is nothing like what you see in the promotional images which shows a very warm set of pearls. Instead, what you get is a collection of pink, rose, beige, purple, gold and white that blends together to give skin a brightening glow. However, I personally find that although it does brighten skin, it also looks a bit whitish. Its great when I use it over a foundation that is a bit warm, but when I go over a pink or more neutral toned foundation I can risk looking a bit “white”. So for this, I must say that the Perles du Dragon, whilst gorgeous, may not be for everyone.

Cons: Depending on your skintone, it may apply a little whiter than you like

Who will like this: Collectors of Meteorites (like me!), Anyone who appreciates a brightening glowy powder that is a little more shimmery than the ones in the permanent range

I have here some comparisons between the Perles du Dragon and Perles de Nuit and the permanent Teint Rose. 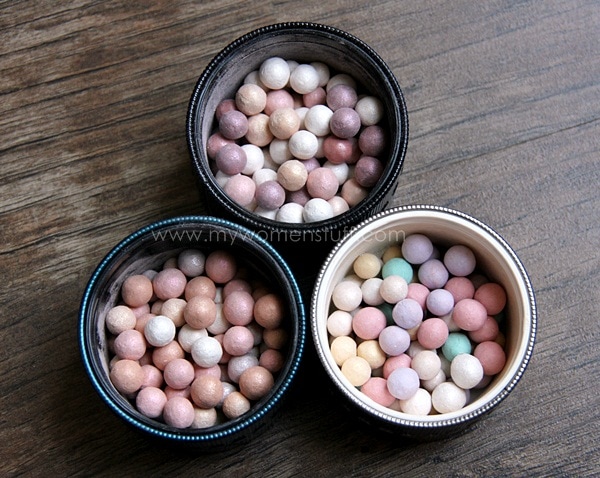 As you can probably see, Perles de Nuit is much warmer in tone than Perles du Dragon. On skin, the difference is noticeable to me, mainly because I am quite used to seeing these. Teint Rose is there for comparison sake, because it is permanent and it isn’t as shimmery as the other two. 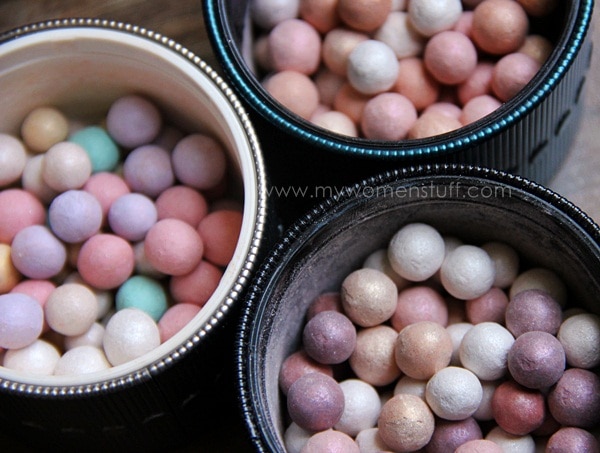 As I’ve pointed out, I find Perles du Dragon a bit cool and a bit white on skin. If you have very warm skintones, I personally do not think this will be Meteorites you are looking for. You may not like the cast and for very warm skintones, try looking into Teint Beige or Teint Dore (both permanent).

If you are new to trying Meteorites, I would suggest you proceed with caution with Perles du Dragon because it is shimmery (its not bling bling glitter, but it is noticeable and if you rub your hand against your face, you will see pearly shimmer come off) and you may not like the whitish cast you can get if you accidentally use too much. I would then direct you to Teint Rose, because for me, it suits most and you can use it everyday without ever looking like you’re ready to party. 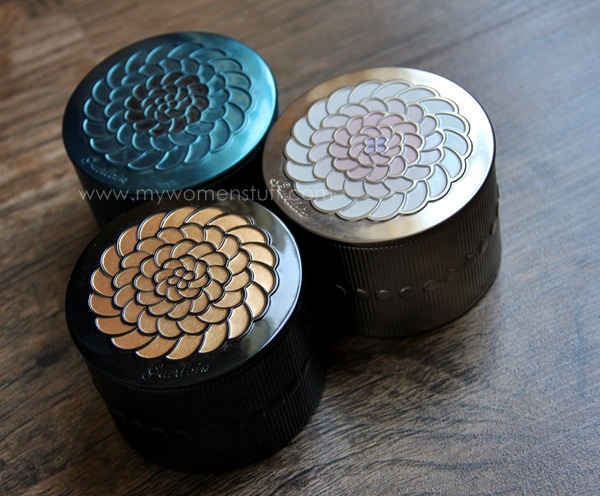 You gotta admit though, that black and gold tin is bloody hard to resist! 😛

The other item I’m eyeing in the Liu collection is this palette – the Liu Calligraphy Eye and Lip palette.

I usually am not a fan of palettes that have powder and cream products next to each other but the colours in this one look pretty amazing, and wearable. Guerlain should take a leaf out of Dior’s book and make a cover for their lip colours though. That would most assuredly seal the deal for me! You can view the swatches of this on Messy Wands.

Do you have your heart set on the Perles du Dragon? Or are you eyeing anything else from the Guerlain Liu collection?

Here’s an interesting bit of trivia. Chinese dragons have a pearl which contains the Dragon’s wisdom and knowledge and power. If you have ever seen a Dragon Dance, you will see how the “Dragon” will chase after the “pearl” that is just led tantalizingly out of reach. I don’t know if the Liu Collection is being released in conjunction with the Dragon year of the Chinese Zodiac, but if it is, I like the nod given to it, and I predict it will sell out worldwide, because the Chinese market is HUGE and Chinese love Dragons LOL! 😛

88 comments ... Read or JOIN THE DISCUSSION