Home » Makeup » CNY Manicure: The A-England Polish in Perceval that I would call “Lannister”

When I told you about the very pretty Tristam polish, reader Applegal mentioned about how awesome it would be to have a polish range named for the characters in the A Song of Fire and Ice fantasy series. You may not know the “A Song of Fire and Ice” fantasy book series written by George RR Martin, but you may remember the rage that was the HBO series last year – Game of Thrones. That was just Book 1 in this 5 book series (so far) and I look forward to the coming series. 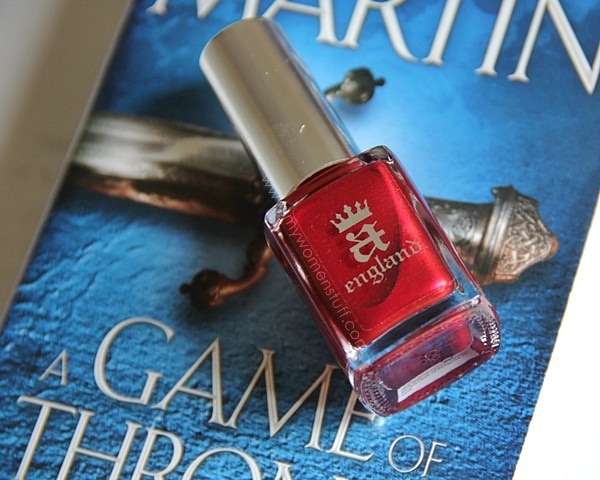 Well lookee what I found, Applegal! :D The A-England polish that I would call “Lannister” or maybe even “Cersei”! :D Instead, its called Perceval (or maybe Percival) named after Sir Percival, one of the most virtuous and pious Knights of the Round Table. Ironic then, that the colour chosen for him would be a red like this one.

Perceval is a beautiful red that is just thrumming with life. Its hard to see in pictures, but when you look at the colour in real life, you will see the fire and life in it. A name like “Lannister” will definitely suit this one much better. The sigil of House Lannister is a golden lion on a red background and it is the most powerful House in Westeros and… I can just see the eyes of non-fantasy fans start to glaze over about now…. :P

On nails, the A-England Perceval polish is beautiful. It applies very smoothly and is fully opaque in 2 coats. I achieved near perfect application with this one – my nail looked smooth without any ridges. 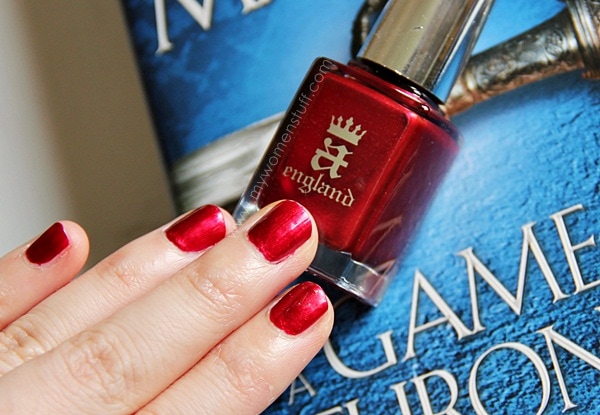 Yes, my pictures seem to say I’m telling a lie, but in real life, it does look near perfect. The colour of the polish is closer to what it looks like in the bottle – a deeper red but with very fine gold shimmer that makes it seem to glow from within with an inner fire. These pictures were taken with sunlight and show you just how beautiful it is with bright or direct light. Its a colour that is alive, not like some of the flat shiny reds you get. This one has character and in the sun, takes on a brilliance that makes you just want to keep staring at your nails. Dangerous when you’re driving though :P 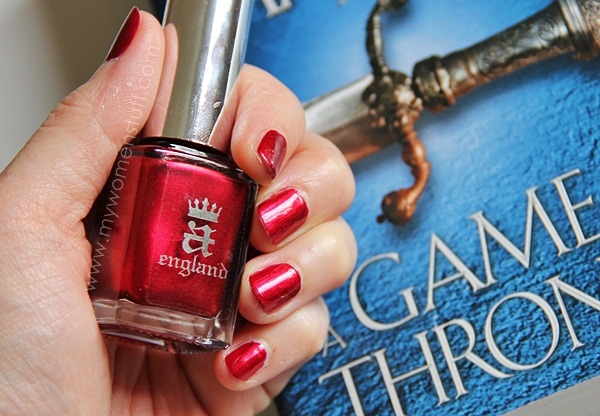 The small problem I had this this one is that for some reason, it wears off quite quickly at the tip so tip wear shows within about 2 days even with a top coat. To be fair, this appears mainly on my right hand, and on the most used fingers of my left for typing. I do find this to be a problem with most red polishes. They always look perfect for a day or two and then go downhill. It is perhaps the contrast that makes it more noticeable. It still looks lovely and shiny and glowy, but I can see the wear at the tip which bugs me, so I’m going to have to clean this off and reapply.

I’ll be making this my manicure this Chinese New Year which is just days away now. Its going to be the Lunar year of the Dragon and I can’t see a better way to greet the Dragon, than by wearing this absolutely gorgeous firey red.

Do we have any fans of the “A Song of Fire and Ice” books in the audience? What do you reckon? Does this red make you think “Lannister” too? I can almost see Cersei wearing this one on her delicate and deadly fingers ;)