I have here a few items from Tsuya Tsuya to tell you about. I’ve actually seen the Tsuya Tsuya counter at Watson’s MidValley and its a substantial one with quite a lot of products available so I can say for certain that this relatively unknown brand can now be easily picked up at Watson’s stores, should you so wish.

I’ll start with the Magic Nail Buff which I rather liked. 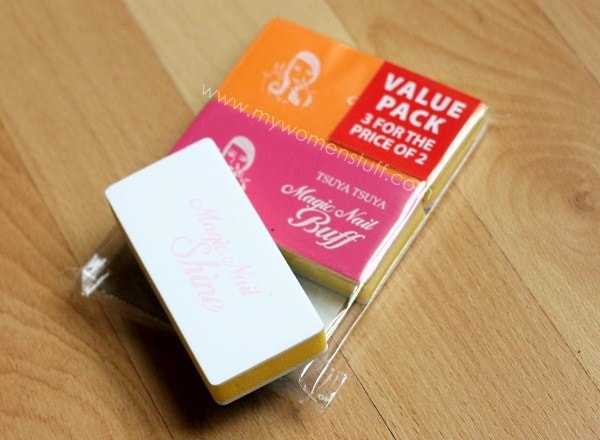 Mine came in a pack of 3. The info tells me that they retail at RM12.90 but I’m uncertain if that’s per piece or per set of 3. If someone knows, it will be helpful. What this is, is your regular nail buffer. Slightly rough on one side (the coloured side) to smoothen ridges on your nails, and smooth on the white side, to buff and shine.

Most of you will be familiar with this one and perhaps even own lots of different types. Being not into nails at all, I don’t even bother to buff my nails. I know, I know. And I call myself a beauty blogger. Bah! 😉

But I liked how shiny it made my nails look without too much effort at all.

Not much elbow grease required and my nails looked healthy and shiny. I think there’s merit to this nail buffing thing after all. I can easily do it while watching TV and I don’t have to wait for it to dry nor will I mess it up! Yay!

Another 2 items I have are the Angel Eyes Fiberlength Mascara and the Lip Embroidery. 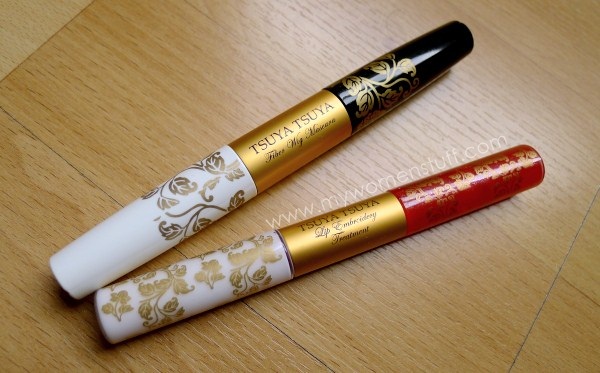 I remember seeing lots of reviews about the Tsuya Tsuya Angel Eyes Fiberlength mascara from a while back. Could even have been at least a year ago. It is a dual ended lash lengthening mascara. One end adds fibers to your lashes, and the other side coats them with black mascara.

Sorry, hated this one.

I don’t usually hate anything, if you realize by now. I may dislike it, but I don’t hate. The thing is, I did hate this one because the fibres are awful! When you pull out the white side of the tube, there is this Poof! and fibers start flying everywhere. They are dry and hard to get on my lashes. When I do, they tend to drop all over my face and it irritates my eyes.

The mascara isn’t bad, to be perfectly honest. Used on its own, its a pretty decent black mascara that does a decent enough job on its own. However, I find it hard to cover the white fibers and it has a tendency to look grey unless I put on at least 3 coats. Thereafter, as the day wears on, the fibers drop into my eye, irritating it. I wore it a few times but I couldn’t find anything to like about it.

This one sounded promising. A lip product that not only treats your lips but adds a natural looking colour and helps reduce fine lines and plumps up lips. Lofty promises.

For me, it delivered none. This is again, a dual ended product.

On one side, the white side, you get this white cream that you apply to your lips first. It then turns pink. As you can see from the photo, the pink is a rather unnatural lurid pink. On my lips, it actually wasn’t very obvious. It gave a light pinkish colour to the lips, just like a colour changing lip balm would.

You are then supposed to top up with the lip gloss on the other side which is a sheer red. It is very sheer and on its own, isn’t bad either. However, I find that the white side is rather thick and goes on a little gunky. It also takes a little while before the colour turns so you can risk having this white rim around your lips if you aren’t careful. Applying the gloss over this just makes it look thick. I prefer using just one or the other.

However, I also found that the scent on the white side didn’t agree with me. I don’t know if long term wear will yield any benefits. The scent put me off so I couldn’t wear it often enough. Personally, I just prefer wearing a tinted lipbalm which would probably have the same benefits, or a good lipstick or gloss.

I’ve tried quite a few items from Tsuya Tsuya so far. I must say that I rather liked their BB Cream – made a good primer. Their gel eyeliner too isn’t too bad, if a little pricey. As for the items I’ve shown you here, I only liked the nail buff. The mascara and lip products just didn’t cut it for me.

Have you tried any of the items here? Or have you tried anything from Tsuya Tsuya? From my observations, their strengths are in the nail department, and perhaps their lash treatment or mascara. It just didn’t fo it for me.