I should have paid attention in school when they were trying to teach me Mandarin. Its not my fault – I was traumatized by the language at an early age, no thanks to a teacher who refused to teach. So I remain pretty illiterate in the language till today.

And the reason I wish I could read Chinese is because I’ve learnt that Chinese women magazines are so much more informative if you enjoy cosmetics and fashion! 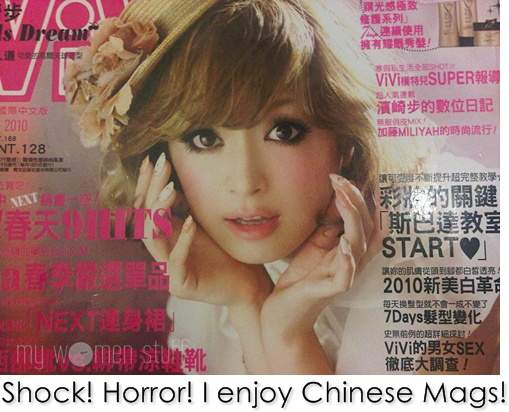 This revelation struck me while I was at my hairdresser last week. Some Mak Datin was hogging the English mags and I wasn’t interested in the Tatler, so I picked up a bunch of Chinese magazines.

Some were local, some were from Taiwan. But in the main, I was impressed. I can’t read Chinese but the pictures were sufficient. There was so much information in there! 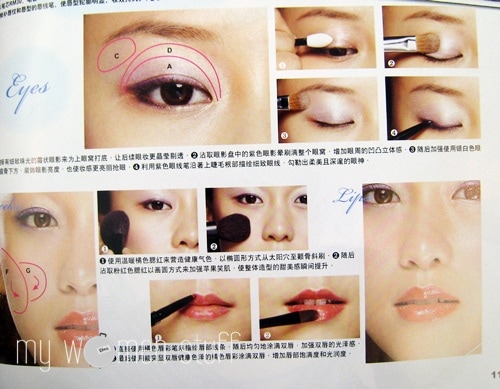 Not only beauty products (and boy! Are there beauty products!) but also fashion and lots of tutorials. Every single magazine I picked up had a tutorial of some sort, be it how to draw eyeliner, how to put on blush, or how to apply eyeshadow, they show you multiple ways you can do it. They also have comparisons between products from different brands e.g. how different pen concealers fare and which is better.

The Chinese magazines from Taiwan were far superior in this regard. The one in the 1st picture is Vivi which I’m given to understand is the Taiwanese version of the original Vivi – a Japanese mag.  I’m starting to understand why Asian cosmetics and brands do better in Taiwan and Japan. The mags are not only full of them, they tell you how to use them. The other pictures you see here are from local Chinese mags which, while not as cutesy as Vivi are as informative.

I’m also beginning to understand why there are so many Asian makeup “gurus” on Youtube and in beauty blogs. If you live in a country where magazines teach you important things like how to use eyeliner, it is no wonder they grow up more savvy in all things makeup, and it is no wonder that makeup and cosmetics sell well. 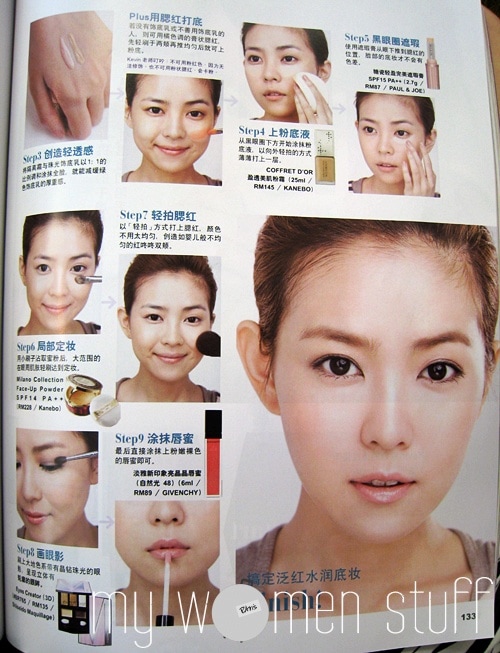 By contrast, I find that English or Western magazines aren’t as tutorial nor information friendly. The pictures are there, but other than show you what it is, they don’t “teach” you. In many ways, I feel like I’m reading a large glossy advertorial.

I also enjoy the focus on Asian makeup brands e.g. Kanebo, Shiseido, Anna Sui, Kose etc which is quite overlooked in the coverage by Western brands. Some of you may not know it, but I was and still am a fan of Asian cosmetics – they are more makeup-newbie friendly albeit more shimmery 🙂

I have one caveat though. I’m not into the looks created and shown, like that in the cover of Vivi above. The other more natural looks in the other 2 pictures are more wearable. I’m not into the whole look involving false lashes, colour contacts, curled hair dyed brown or blonde, and taking photos with that “Look at me! I’m so cute!” look. Vivi was full of girls who looked like that. It is no wonder I’m seeing a plethora of blogs with girls who look like this (or are photoshopped to).

So the next time I go to my hairdresser, I’m going to be skipping my regular dose of Cleo and Her World etc and will be picking up Vivi and any other Chinese women’s magazine they have lying around. I may not understand what they are saying, but their pictures are enough to teach me a thing or two 🙂 And then I’d tone it down to use for everyday so I don’t end up looking like a manga character LOL!

If you can read Chinese, lucky you! But if you don’t, do you enjoy flipping through Chinese magazines anyway to look at the pictures and tutorials?