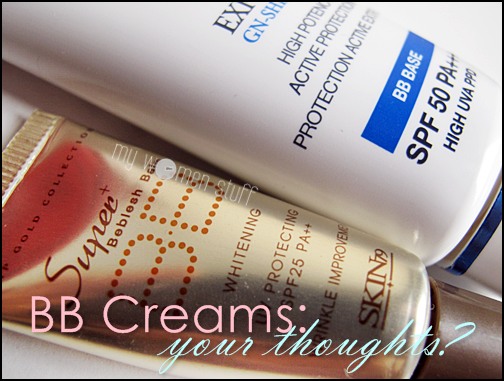 Yet, I actually also read somewhere (gosh! I forget where!) that they are called Blemish Balms or BB Creams because Koreans find it hard to pronounce “Tinted Moisturizers” which these products essentially are. Don’t shoot the messenger! 😛

All-in-One : Master of none

Another thing is that I’m not much into the “all-in-one” style of doing things. I don’t find it a hassle to layer my moisturizer, sunscreen and foundation. Its routine for me. So, its no use selling me an “all-in-one” product because it does not appeal to me. Experience also tells me that “all-in-one” products tend to be a jack of all trades and master of none.

So just like shampoo and conditioner, I like keeping my products separate. I believe that specific products targeted at specific needs work better than 1 product that claims to work for everything.

I don’t know many Korean women but I do wonder if the colour selection of BB Creams are targeted at them. Very few Asian women have a grey skin tone and many BB Creams have a grey cast. Its all quite odd. Colour selection is for the most part small so those with darker skin tone will not be able to use BB Creams – but I understand that because in Korea, I don’t think skintones vary by very much there. I have tried some with a yellow tint but those tend to make me look orange. In fact, from my experience, grey tones actually work better than yellow toned BB Creams (for me)

But it must be a good thing – Western brands are getting on the act!

I must admit that although I started out a bit meh about the Lancome BB Cream sunscreen thingy, I now rather like it used as a makeup base. I use it as tinted sunscreen – primarily as sunscreen. It helps even out skin tone a little but then I still layer on my powder foundation as normal. It helps the skin look much smoother. I do find that the texture feels different from the Korean or Asian BB creams. Its not as thick and its not as oily.

MAC Cosmetics too has a BB Cream launched but I haven’t tried that one. And its come to my knowledge that Estee Lauder has a BB Cream too! Both are not available in Malaysia or in many countries (for now) and I’m told the MAC BB Cream is sold primarily at airports or duty free where there is a MAC counter. We might see the Estee Lauder one come in next year – I’ll keep you updated.

The common trend among these 3 based on what I’ve read online and from my experience with the Lancome one, is that the Western brand BB Creams look and behave more like tinted sunscreen. What Lancome and Estee Lauder have done is to put tint into their sunscreen. It will be interesting to try the MAC and Estee Lauder one though. I’ll report if I do 🙂

With 3 big Western brands already riding the bandwagon, I’m not surprised if some of the other brands start hitching a ride. BB Creams look to be here to stay!

Will you change your mind about BB Creams?

Yes. I am woman after all and fickle 😛

3 years down the road, if I’m still blogging, I might pick up my newest Holy Grail BB Cream and think “Did I ever NOT love BB Creams?! The horror!” and I’ll run back here and tell you about it. But its been 3 years since I started blogging, and 3 years since BB Creams entered our radar with a crash boom bang and I’m still not smitten.

And this lovelies, is why I don’t talk (much) about BB Creams 🙂 Please feel free to change my mind 🙂