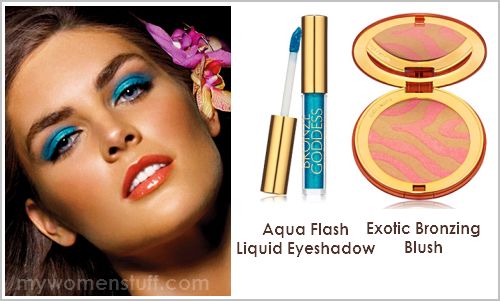 I showed you pictures of 2 items from the Estee Lauder Bronze Goddess collection that I coveted way back in February 2010. February! Where has all the time gone?

So now that its the end of May and the Bronze Goddess collection is out at Estee Lauder counters, I went to take a peep. My heart was set on the Exotic Bronzing Blush before I got there.

Its a HUGE pan of blush and its very pretty in person and retails at just RM110 so its a great deal. Only thing is that its seriously limited edition. At Isetan The Gardens last night, there were only 3 left. I swiped, it, played with it and hmm-ed and haw-ed over it for an agonizingly long time. To her credit the SA was super nice, did not push me nor did she shoot me dagger looks – go look for Florence. She’s super sweet too.

In the end I did not get the blush – let my swatch show you why below.

The Estee Lauder Exotic Bronzing Blush swipes very similar to NARS Orgasm – a blush I already own (and hardly use). It is quite sheer so I had to layer it to get the colour you see in the picture. But ultimately, it applies pretty much like many other pink-peach blushes out there. Money saved! Whew! This also makes it another NARS Orgasm dupe.

The item I picked up was the Aqua Flash liquid eyeshadow. A tiny little tube of liquid eyeshadow with a doe foot sponge tip applicator, like that you get on lipglosses. Just don’t go slicking this over your lips because it sticks like glue. The SA told me it was waterproof. I found out that it was true. 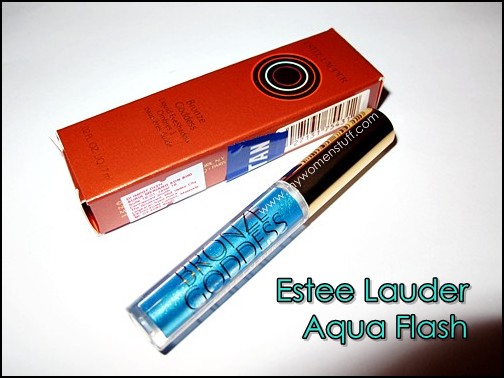 Aqua Flash applies very pigmented, so I just use 1 little dot and then sheer it out. Even then, as you will see in the swatch below, the colour is still very strong on my eyelids. It removes with cleansing oil or eye makeup remover.

Aqua Flash is a bright bright teal shade, very suitable for summer. Not one for the faint hearted though, because this one is hard to control.

In real life, its a bit brighter blue than you see in the picture. Here’s how I used Aqua Flash.

Its a pretty colour and I love how intense it is. I’ll be playing around with it for a while but if you have suggestions on how else I could wear Aqua Flash, or any other colour combinations I could try, do let me know in a comment! 🙂