Give me any product with the word “hydro” in it, and I will definitely not hesitate to try it out. With the amount of air-conditioning most of us are exposed to, it is safe to say that most of us have some level of dehydrated skin, and can certainly benefit from some extra moisture.

Well, the first thing that I noticed was however, not the color of the gel, but rather the VERY strong scent it exudes. It’s not an unpleasant smell, but to me, it felt a tad pungent and quite *sharp*. I immediately tried a little on the back of my hand and was surprised that it made my skin smoother right away.

That same night, I applied the Neutrogena Hydro Boost Gel after my regular cleanser and toner regime. I still couldn’t get past the strong smell though, and it lingered a long long time. I don’t really like skincare products with strong smells, so this was sort of a turn-off for me. I thought I would get used to the scent as time went on, but I have been using it for 3 weeks now, and I still don’t really like the smell. I wish they’d make it perfume-free though. 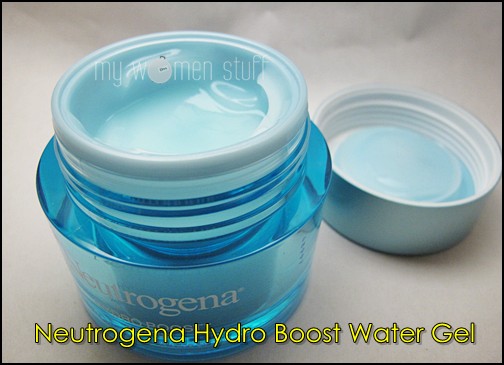 In spite of the smell, however, the Neutrogena Hydro Boost Gel worked wonders to maintain the moisture level in my skin. It has something called the Progressive Release System, which gradually releases moisture into your skin throughout the time the gel is on your skin, and my skin definitely did not feel dry afterward.

The gel is rather light but not sticky. It goes on smoothly on my face and neck, but I found that I have to use quite a lot to make sure it covers my face and neck. Not very economical, I’m afraid.

I used this gel day and night as a replacement for my moisturizer. It didn’t make my skin taut after 3 weeks of usage, which meant that it maintained the moisture levels, and I would recommend it to anyone who feels their skin is dehydrated, because the hydrating effect is almost immediate, and it’s cooling too! At RM59.90 a 50g tub, it’s a value-for-money product if you’re not particular about strong-smelling stuff.

PB Notes: Like Giddy Tigress I found the scent in the Neutrogena Hydro Boost line a little strong too. It would be nice if Neutrogena killed the scent or made it lighter. Have you tried this one? Do you have your own thoughts to share?

This guest review was written by gal-pal Giddy Tigress who blogs at Kaki Shopping and is a lovely WAHM to 2 adorable children.

The Neutrogena Hydro Boost gel cream retails at RM59.90 at all major pharmacies