That’s how they say “Welcome” or “Hello” in Thai. I recently went for a Thai massage at one of the regular places I go to and realised I’d never told you about it – so after sneaking some photos during my most recent session, here it is 🙂

Touches de Siam the place I go to in Jalan Telawi, Bangsar Kuala Lumpur. I believe it is now part of a chain of Thai massage centers under the Thai Odyssey brand but it was the first to be set up I believe. I’ve been going there on and off since they opened quite a few years ago whenever I feel like a bit of Thai massage and do not want to fly all the way to Bangkok for it 😛

Part of the reason I go to Touches de Siam is because I found that their Thai traditional massage was quite “authentic” in that it was similar to what I had in Bangkok. Also, the prices weren’t all that insanely expensive compared to aromatherapy massages. Granted, it is still substantially more expensive than in Bangkok where I have paid about RM35 for a 2 hour massage, compared to RM98/2 hours at Touches de Siam. But I get a pretty good massage and I think that the price isn’t all that bad considering I’d have to factor in airline costs if I want to pay RM35/2 hours 😛

What is a Thai Traditional Massage?

Thai traditional massages are where the masseuse massages your muscles using the various parts of their body to assert pressure, and stretching your muscles as they go. It can sometimes be painful if you aren’t used to strong pressure so be sure to let your masseuse know if you feel pain.

How best to enjoy a Thai Traditional massage?

The best way to enjoy a Thai Traditional massage is to go limp and let the masseuse manoeuvre your limbs any way they want. This way, you will not feel pain if you resist the movements and there is better “flow”. I have found that the masseuses at Touches de Siam seem to know what they are doing, so I don’t end up feeling bruised after a session. In Bangkok or even in other centers, I’ve actually felt uncomfortable and bruised after the massage.

The other thing I like about a Thai massage is that you keep your clothes on. Well, not your own clothes per se, but a pair of pyjamas you are asked to change into. At Touches de Siam, they ask if you want tiger balm applied on your back – its up to you. I agree because I like the warm and subsequently cool feel on the skin but if you don’t want it, just tell them.

At Touches de Siam, your session starts with a quick wash of your feet after you change into slippers that are provided. There are single rooms for more privacy and couple rooms if you’d prefer to have your massage done with a friend. The lighting is very low and its soothing after you change into your pyjamas.

I usually go for the 1.5-2 hour sessions. Sometimes I doze off, most times I don’t but I’m relaxed either way as the masseuse massages and kneads away at the muscles starting from your legs all the way to your head and ending at your back. Oh and another good thing – the masseuses speak English 🙂

Here’s the menu and the prices based on February 2010 rates as picked up from their counter. The prices haven’t changed much if at all from at least 2 years ago when I first visited them LOL! 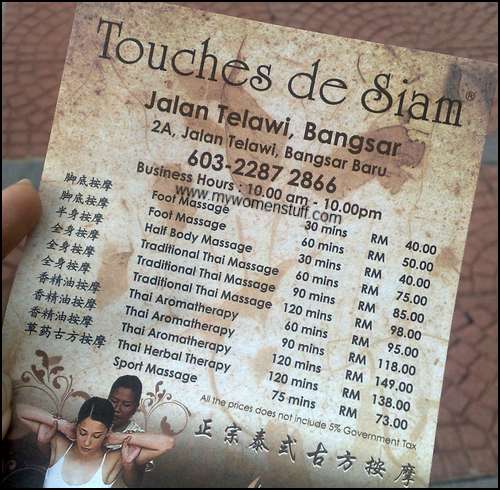 There are sometimes promotional discounts with banks (presently its with HSBC Credit Cards) so ask before you pay in case you can save a little money.

They do packages too e.g. Buy 5 Free 1 but I don’t buy packages because I don’t go all that often. I also like the flexibility of being able to choose something else if I want but thus far, I’ve stuck to the Traditional Thai Massage.

Tip: Since we are mostly women here, my advise will be NOT to partake of Thai Traditional Massage if you are having your period. I find its more uncomfortable even if you use a tampon as you are pulled in all sorts of directions.

Touches de Siam Bangsar is at Jalan Telawi (above the Al Rajhi Bank) and parking is hell in that area as anyone who lives and works and goes there knows. You can park in Bangsar Village for greater convenience and walk. Its not far. Best to call for an appointment just in case they are full.

If you have tried the massages at Touches de Siam, do share your experience. I have not tried any of the other outlets so I cannot compare but I’d likely just stick to this one for convenience. 🙂