I used to look at the YSL Touche blush and thought it super cute, but I couldn’t bring myself to pay for it if it wasn’t practical or user-friendly. So, when I noticed that Bloop de Paris has a dupe of the YSL Touche blush, it was a no brainer to give it a shot!

Note: YSL Cosmetics has been pulled from Malaysia (it is also pulled from Singapore) despite previous information to the contrary. I’m told its due to a change of management and distribution channels so I’m confident we’ll see it come back soon 🙂 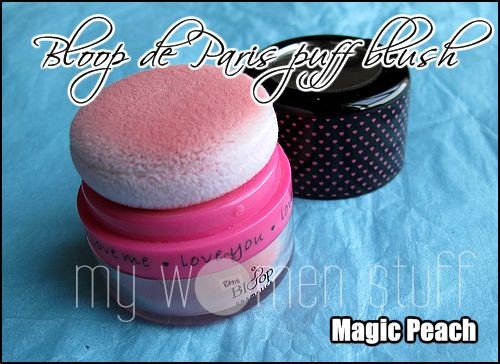 So since we don’t have YSL for now, we have Bloop! The packaging of the Bloop de Paris Puff Blush isn’t as lux as that of YSL I have to admit, but the concept is the same i.e. loose powder blush that applies through a sponge puff. You tap it on and you can use the puff to blend it.

I encountered a slight “accident” when I first opened the cap of the Puff Puff blusher. The sponge puff had come off and some of the loose powder blush has spilled everywhere which was a bit of a mess. Getting it back on was a bit of a hassle as you have to pull a sponge “cap” over the hole where the powder comes out of; but once I got the sponge puff back on, it’s stayed put ever since.

Here’s my tip for using the Bloop de Paris Puff Puff Blusher or any similar type of blush:-

Tap the puff on the back of your hand until you see the colour appear. Only then do you tap LIGHTLY on the apples of your cheeks. Preferably, use a brush to blend the colour on your cheeks. Otherwise, lightly blend edges with the sponge puff. Layer if needed.

When I do it the way I mentioned above, I get adorable kawaii rosy cheeks. Its all I want to do to put on light shimmery makeup and strike a kawaii pose 🙂 But if I’m lazy and puff it straight on the cheeks without first puffing it on the back of my hand, I get a “OMG You just got slapped!” look – not nice!

This swatch below is not the best, but it’ll do – it was the best I could capture after layering at least 4 layers to get the color to show up! 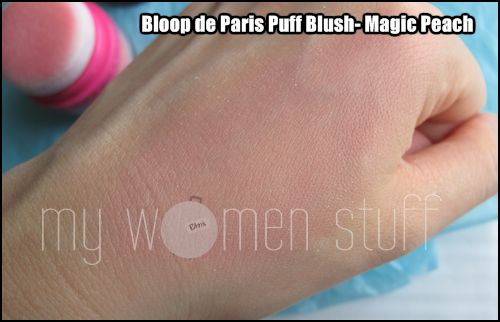 The shimmer in the blush is very subtle. You can’t over do it because if you do, its way too obvious. So, this is nice. The colour I have is Magic Peach which is a cute peachy pink shade. I only use it on the apples of my cheeks for colour and blend on my DiorSkin Shimmer in Rose Diamond. I love the effect.

So if you’d like something inexpensive and fun, try the Bloop de Paris Puff Puff Blusher. They really need to work on their names and this may not be the easiest product to use but I personally think that its a pretty decent product over all. Plus, its a fair dupe of the YSL Touche Blush at a fraction of the price!

Bloop de Paris Puff Puff Blusher retails for RM29.90 at Bloop de Paris counters (Sunway Pyramid, KLIA, LCCT, Jusco, Sasa and wherever you see them being sold – they are one of the most elusive brands I know. Its like hunting the Tasmanian Tiger! 😛 )

Cons: Sponge should be fixed on properly before cap is sealed, Easy to overdo

I believe these puff style blushes are not only available in YSL but also in Kanebo Coffret D’or, Elianto and SkinFood (possibly TheFaceShop). In short, its not uncommon – but have you tried it?