First J-pop hit us with Japanese tv dramas and mini series and all those cool looking Japanese guys and girls and food. Then K-pop hit us with all things Korean. I’m happy – I love the food from both countries! :D

But you know the one thing that is similar between the two? Awesome and up to date hairstyles! I’d been to a myriad of hair salons but never a Japanese or Korean one so when I was recently offered a chance to try out Min & Shunji Matsuo Hair Studio, I was only too happy to do so. 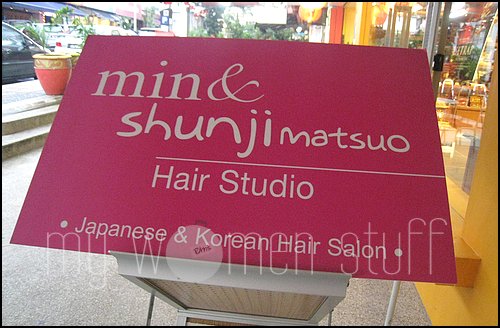 Min & Shunji Matsuo Hair Studio is owned by Min Byung Kwon (affectionately known as Min) – a Korean international hair stylist, together with Shunji Matsuo a Japanese celebrity hair stylist. The name might ring a bell when I tell you its the Shunji from the Japanese Shunji Hair Studio at MidValley Megamall. Min was the International Director there and used to travel between Kuala Lumpur and Singapore and internationally until he decided a few months ago, to put down his roots and set up shop here in Kuala Lumpur – Bangsar to be exact – to our benefit of course!

When I got to the salon, Min checked my hair texture and told me my hair was a tad frizzy so if he were to cut it any shorter, I’d look like a mushroom. I appreciated that. No hairdresser has ever told me I might look like a mushroom before even if I did think it a few times myself! So, we did a soft rebond to soften this mushroom head. 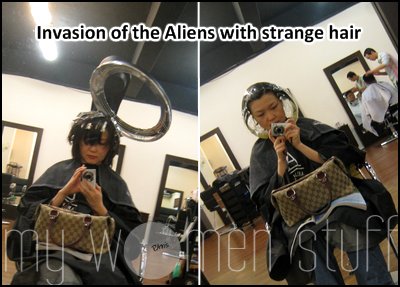 I’d done rebonding once and ended up with chopstick straight hair. I hated it – no offence to anyone – but I had to do it to get a perm out. A “soft rebond” I was told only rebonds your hair to about 60% straightness so your hair retains its volume but is more manageable and sleek. I don’t know the technicalities of how it was done but you can see me looking rather like a cling filmed Queen Amidala above. The end result however is very natural and sleek without that Ju-On look associated with Korean or Japanese horror movies or without my hair looking plastered to my head – whew! :P

Being bored with my current hairstyle and with a birthday coming up, it was time for a new look so I requested that highlights be put in, leaving it to Min’s discretion as to the color and the caveat that I was fine with bold colours. I ended up with streaks of red toned browns all over my head (the latest color fad in Korea and Japan I was told) and a sharper sleeker cut from when I first entered the salon. I was a little apprehensive initially I must admit but I loved the final outcome. 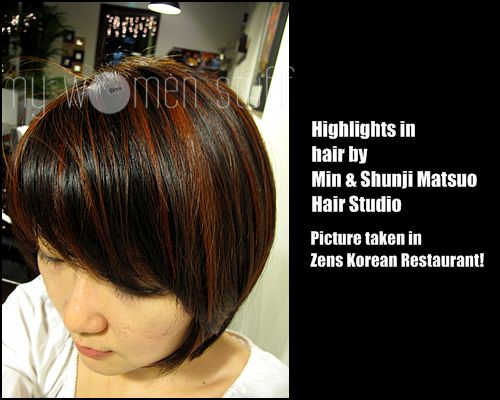 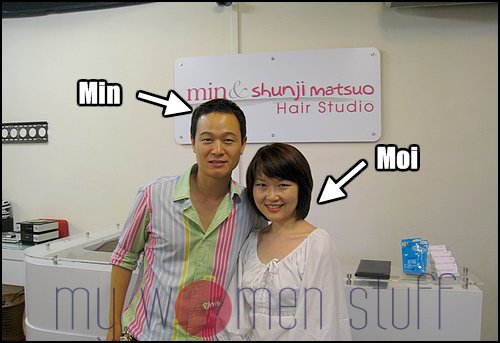 My mum saw me 3 days later and commented that my new hairstyle and colour made me look younger than before. Mums always know the best things to say don’t they? :D I’ve also been mistaken often for being Korean or Japanese but now I look even more so – eeps! But I’m probably going back to Min to get my hair done for a little while especially once the color and style starts to grow out! :)

Did I feel like I was cheating on my current hairdresser? Yes I unfortunately did :( But it was so worth it :P

Min & Shunji Matsuo Hair Studio is on the 1st Floor at Jalan Telawi 2 Bangsar Kuala Lumpur (the road behind Public Bank). The salon is large and airy with a minimalist design. As of October 2009 a haircut costs between RM60-98 for women and slightly less for men. Having Min work his magic on your hair will set you back RM98 which isn’t that crazy expensive as I had expected for an international stylist. 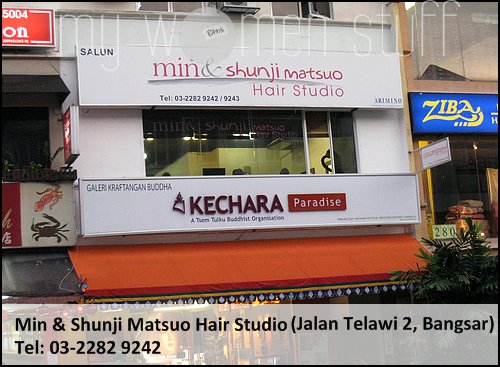 Hair color, highlight, Rebonding and perms cost between RM160-RM550 depending on treatment and hair length.

Min & Shunji Matsuo Hair Studio has a current promotion of 10% discount off hair cuts or treatments until 30 November 2009. You can get it by either of the following:-

63 comments ... Read or JOIN THE DISCUSSION