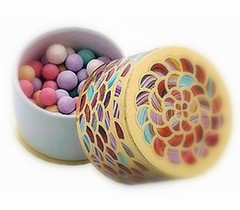 Tine asked me in a comment below what I thought about Meteorites. Well the short answer is that I love them. But do you need it? Well, it depends.

or also known as the Original version. It has red, gold, purple, white and blue coloured balls in a tub. Its shimmery but not shiny. So, it adds a glow, but not shimmer. If what you are looking for is a highlighter or shimmer, then this is not for you. However, if you have been having dull skin or late nights and just want that extra pick-me-up added to your skin, then this might be the ticket. Its nothing that can be seen off the bat, but for me, it works.

What I do is swirl a fluffy powder brush over the balls and then brush over my face after foundation/loose powder. It doesn’t add any discernible colour or shimmer on the skin. However, when the light hits your skin, i find that it adds a glow that tells people you had a full 8 hours of sleep, even if you’ve been up half the night!

As I said, it depends on whether you need it as this is rather pricey at something like RM150 RM168 per tub. It will last you forever though. There is a fragrance that doesn’t bother me, but might bother some people, so if you have a counter near you, go take a sniff and test it out first to see if you like it. Its too expensive a product to buy and then regret later.