Home » Interesting Discussions » Your Say: Can the colour of your wallet affect your spending habits?

Can the colour of your wallet affect your spending habits?

This is something quite interesting to think about, prompted by something said to me quite recently, in good fun of course. But still, as they say, there’s no smoke without fire and there could be a grain of truth (or not) in some beliefs. 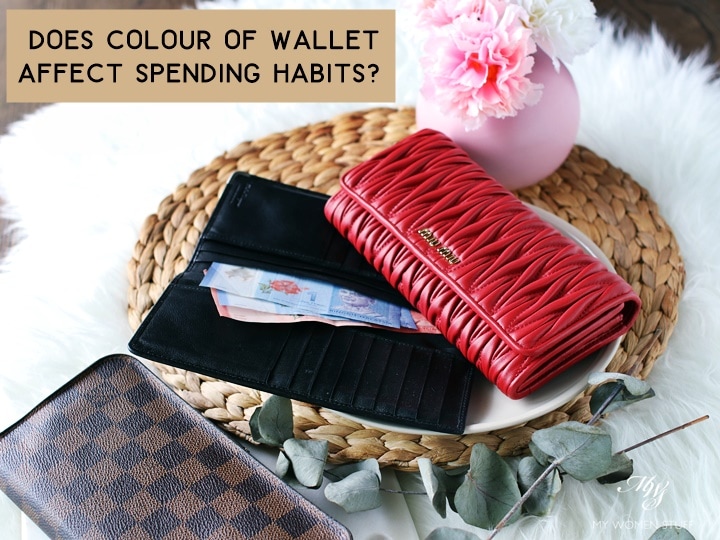 A month or so ago, I shared on Instagram Stories, that I was finally swapping out my wallet of 5 years for a new one. I’d gotten the red Miu Miu Matelassé Leather wallet a while ago, and felt that it was time to put it to use.

What amused me was how many people dropped me a message to say that I should be careful because a red wallet is supposed to cause you to spend more money! Hmm… did I want to be spending more money?! :D

I was quite intrigued by this notion, so I looked it up online, to see where this idea was coming from.

Apparently, this stems from a feng shui belief, that red, being associated with the fire element, can result in you burning away your wealth luck! Eeps! I didn’t want that!

The other belief associated with feng shui is that red, being a strong and powerful colour, can enhance your traits. So, if you are already prone to spending money quite easily, then it might enhance that trait, causing you to spend more money.

On the flipside, I also came across advise from people saying that a red wallet attracts luck, and therefore brings in more money! A red wallet was therefore advisable to have! LOL! :D

So you know what? I consciously observed my spending habits during this time that I’ve been using my new wallet :D All in the name of a fun experiment! 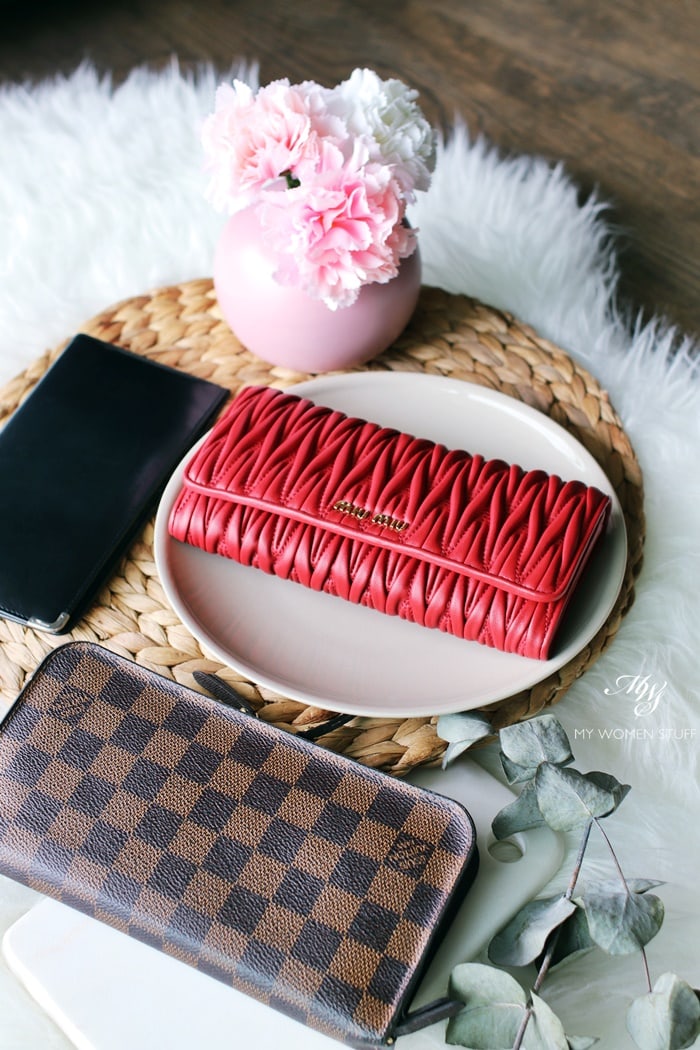 To be honest, there was not much change in my spending habits, nor in my wealth inflow LOL! :D

If I don’t go to the malls very much (and I generally don’t, unless I have a reason to) then my spending noticeably drops. Even if I don’t buy anything, parking fees, food and/or drink costs do add up once you’re out of the house!

If I don’t visit a Uniqlo store, then it drops significantly! haha! :D Yes, I am quite an unabashed Uniqlo bargain hunter :P

My last wallet that I’d been using daily for over 5 years, was the Louis Vuitton Insolite in the signature LV Damier Ebene canvas. I bought it as my birthday gift from me to me back then, and I had a very easy way of picking out a wallet. I simply walked into the store and said “Show me the wallet that can hold the most number of cards!” :D

I used to carry all sorts of cards around with me back then – loyalty cards, credit cards etc. And they all needed a slot of their own. The Insolite boasts a whopping 16 card slots, yet folds up into a slim, compact thickness. I’ve stopped carrying around so much junk since so felt it was time to downsize a little.

The Insolite is quite a monster of a wallet in size and how much it can hold. There is little point my telling you about it, as it has been discontinued, except to say that I love it to bits. After 5 years, it barely shows any wear even at the corners, and I loved how it wasn’t very bulky except in how big it was.

As it is brown, I looked up what feng shui said about a brown wallet, and apparently, brown wallets are supposed to be good for you to hold on to cash. The rationale is because it is the colour of earth, which is stable, and therefore translates into stability in your wealth luck too.

Looking back however, I went through austerity and spendthrift days back while using my brown wallet, so I’m not sure that’s the most accurate interpretation! LOL!

I’ve been using the Miu Miu Matelassé Leather wallet for over a month now, and I think most of those who shared their experience with me using this wallet are right. It is terribly bulky due not only to its almost tri-fold construction, but also to the puffy Matelassé leather design. Matelassé is made by folding the leather into the folds that you see, that give it its unique design.

The lambskin leather is naturally less hardy than canvas and I don’t baby my wallets so that might eventually be a challenge one day. My wallets need to be a workhorse. A small point that niggles at me is also how when I pull at the zip for my coins, it causes the section to pull to one side. Small things. I might have been spoilt by the LV wallet before this.

No matter the detractors, from my experience, LV’s attention to detail and construction of their bags and small leather goods are exceptional. But I digress :P

The Miu Miu Matelasse wallet is also quite a big wallet, in that it can fit up to 12 cards, with a zippered compartment, and 2 compartments for notes. It even comes with a mirror that I detached, because I had no use for it. But once you fill it up with your cards and notes and the occasional receipts, the wallet significantly increases in bulk.

I don’t quite like that :( I’d been used to a slim wallet that held the same things, for so long that having to deal with a bulky wallet quite put me off.

At the same time, not utilizing the space it has would be a waste. What’s the use of all that space in the wallet if you’re not going to use it?! What I did like however, was the double bill slots. I could keep my money in one slot and receipts in the other. Previously, they were all jumbled up, so I never ever knew how much money I carried with me.

Once, I thought I had a bulging wallet of notes and traipsed out for a meal, only to realize that what I really had was a wallet filled with scraps of paper and RM1. Just 1 measly note that could barely buy me anything! Lucky for me I could use a credit card to pay for my meal or I’d have been turfed back to the kitchen to earn my keep! :P

The jury is out. I don’t think I’m spending much more than normal, although I did make a few big ticket purchases recently. But they were things I already planned to get, and I got nice big discounts on them.

I am also being quite careful with spending where I can (It’s an on-going austerity drive I’m on) so I can say I’m conscious about the money I have and spend, and I don’t spend what I don’t have.

For interest, I’ve rounded up some interpretations of colours of wallets and how they can affect your spending habits :

At the end of the day, I’d say to take these beliefs with a grain of salt :D What is more important I feel, is to be happy with the wallet you own, and to be conscious and careful about your spending habits. I doubt the latter could be controlled merely by the colour of your wallet! :D

So, what colour is your wallet? :D

I gravitate towards bold colours for my bags and small leather goods. So a black wallet just isn’t me at all. I’ve owned red wallets a few times over the years, and it has not coincided with any periods of great wealth or frivolous spending. So, I’m not too worried right now! ;)

PREVIOUS POST: The Laura Mercier Stardust Radiant Glow Palette will make you glow and shine in the City of Lights
NEXT POST: Let the Jo Malone White Moss and Snowdrop cologne ground you amidst all that sparkles this festive season