Home » Bath & Body » In the L’Occitane x Pierre Hermé Holiday Collection 2015 you can have the macaron maestro without the calories!

When I was first told that L’Occitane was pairing with famed pastry chef Pierre Hermé for their Christmas or Holiday collection this year, I had an “Eh?” moment. Pierre Hermé, famous for his macarons, was an unlikely collaboration, I thought. Then again, Laduree has a makeup range that has nothing to do with pastries or macarons, so who am I to judge right? LOL 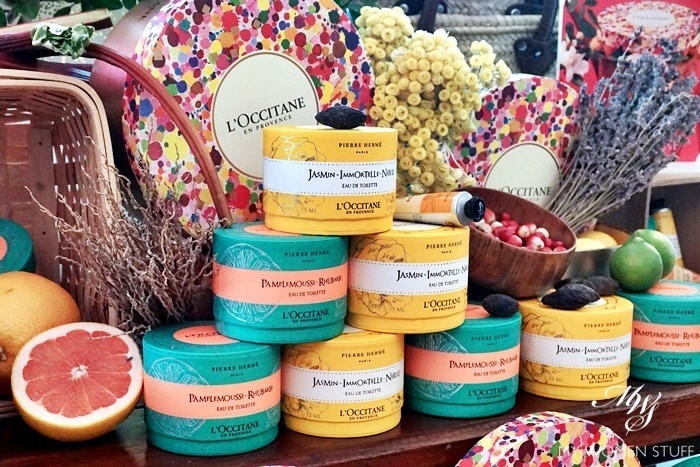 As it turned out, I thought the combination of scents quite fascinating. Must be to do with that chef’s palate. I mean, who’d have thought to marry the bitter-citrus note of Pamplemousse (grapefruit) with the sour note of rhubarb?! Incidentally, I LOVE rhubarb, and don’t tell anyone, but after the press event, a few sticks of rhubarb went home with me in my bag and into a delicious crumble 😀 shhhh…..

Ahem! Now, let me quickly tell you about my thoughts on the scents. It’s just a quick overview, nothing too detailed because scents are very personal things. I was gifted with the Jasmin-Immortelle-Neroli fragrance, so I will be able to tell you about that one after some wear 🙂

There are 3 scents in the L’Occitane x Pierre Hermé range, which are then infused into the various bath and body products. 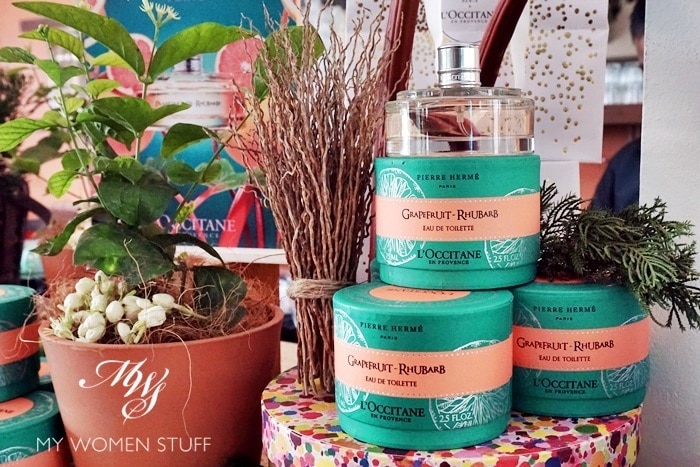 Pamplemousse-Rhubarb : From memory (because I don’t have it) it has a nice burst of citrus and sourness, with a slight bitter note to keep it from smelling too fruity. I liked the idea of the scent and the combination, but on my skin, the scent dried down to something that smelled like… sweat. It wasn’t pleasant. The hand cream was much better for me because the scent was a little smoother. There is a full range of shower gel, body lotion, fragrance, and hand cream. 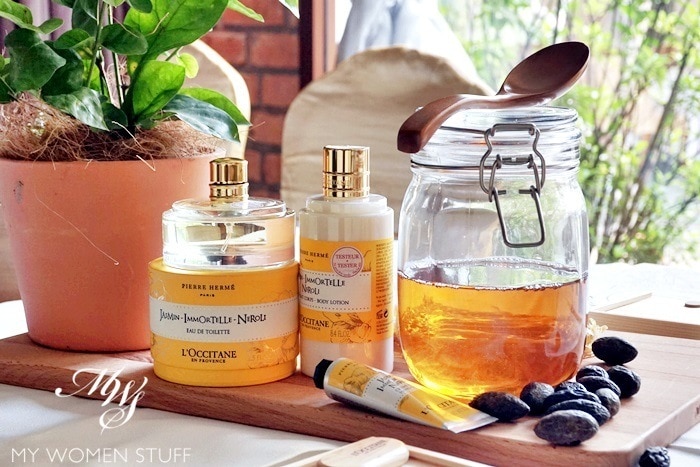 Jasmin-Immortelle-Neroli: This one has a slightly sweet orange citrus note provided by the Neroli, that dries down to a warmer base scent of Jasmine. While I usually shy away from jasmine scents, this one sat well with me, primarily because of the Neroli and Immortelle that lifted it and prevented it from being too sweetly floral. I found it has a fizzy zing to it, that makes it a nice scent for the day. Similarly, this has a full range of shower gel, body lotion, fragrance and hand cream. 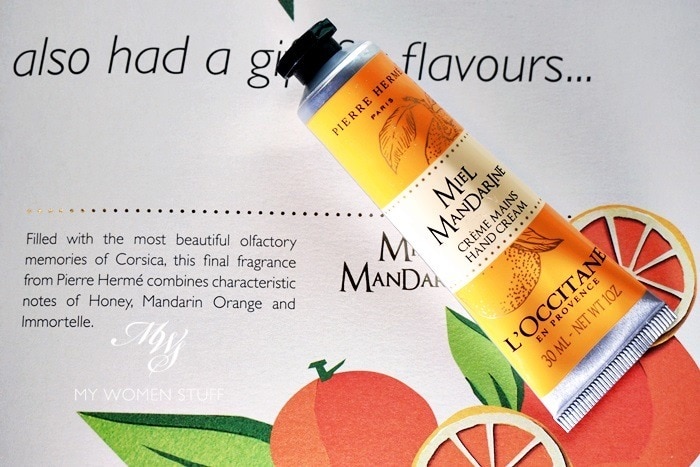 Miel Mandarin : This range is only represented by the hand cream, which has a significant scent of mandarin oranges. It is a smooth scent without being too strongly citrus or too orangey, so it was quite pleasant to use. Like the regular L’Occitane hand creams, this was moisturising, not sticky or greasy and comfortable. I found that the scent was not too strong, which is how I like it. 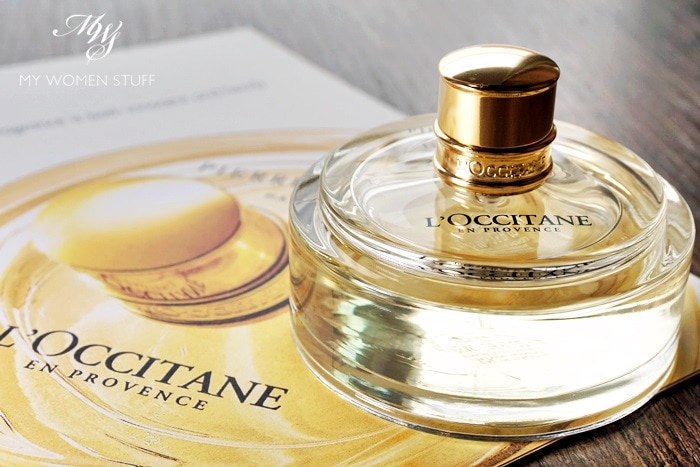 As I have noted, I found the Jasmin-Immortelle-Neroli fragrance surprisingly pleasant on my skin. This, coming from someone who run as far away from Jasmine scents as possible, and isn’t a fan of sweet, floral scents. On paper, the Pamplemousse-Rhubarb would have been my choice. But in person, it was otherwise.

I find that the fragrance spritzes out a little fizzy to my nose, like that of champagne, with a noticeable orange note contributed by Neroli. However, this fizzles out quite quickly and dries down to a more mellow floral note, that is lightened by the citrus scent of Neroli, so it isn’t cloying the way I find jasmine to be. For an EdT, it was fairly longlasting although I only prefer to use this in the day.

Quite interestingly, I was told that the short, squat bottle of fragrance brings to mind a macaron, as does the packaging of the fragrances, as you can see above. The boxes bring to mind a macaron, with the band of colour in the middle. I thought it quite clever and keeping to theme, without being kitchsy and cute. 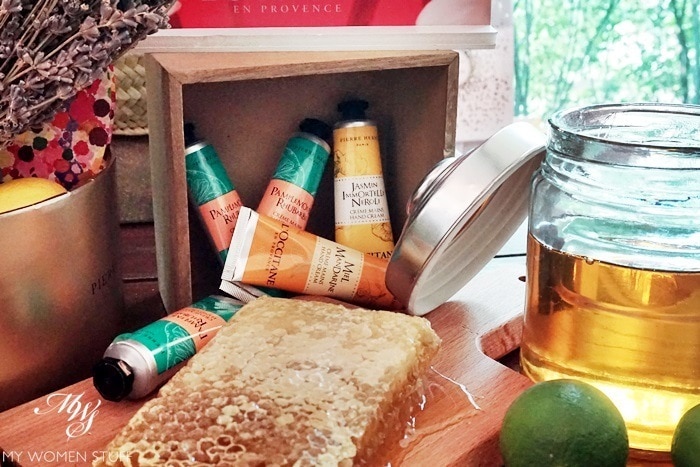 Personally, while I thought this an unlikely pairing, the collection turned out more palatable than I expected. If you are already a fan of L’Occitane products, then you will be familiar with their quality.

As far as scents go, I’m personally for smelling it for yourself to decide which will suit you best. I never thought I’d own a perfume with jasmine in it, but for some reason, this pairing works on my skin. It’s a nice fresh scent that isn’t cloying or heavy, which is nice for our weather. Light, when it’s hot out, but slightly warmed when it’s cold and rainy.

I’m a wee bit biased against the Grapefruit-Rhubarb one because it made me smell sweaty, but it smelled good on my friend. It had a nice bitter citrus top note, like that of grapefruit peel, but tempered with the tartness of rhubarb. It actually smelled a little musky once it dries down. Personally I’d pick one of the body washes or lotion or maybe hand cream in that scent 🙂

Have you sniffed at the L’Occitane x Pierre Hermé collection? Does the food-fragrance pairing throw you off?

It threw me for a loop initially, but I can see how it works. I suppose pastry chefs need a good nose as well as tastebuds! Special shoutout to @puiyeekong on Instagram who has been instrumental in making sure I got this post out when I said I would LOL! 😀 I hope this helps you decide 😉

The L’Occitane x Pierre Hermé collection is limited edition and available at all L’Occitane stores and are sold individually or in gift sets. If you don’t have a store in your city/town, you can pick them up online as well.

Disclosure: Featured fragrance and hand cream were press gifts from the product launch. Our commitment is to honesty and fairness. For posting guidelines please read our disclaimer.