Home » Eyes » Mascara » Your Say: Do you toss out your mascara after 3 months? It could be 3 months too early!

Ladies, lets have a show of hands here.

How many of you abide by the “Toss your mascara after 3 months” rule? This is a “makeup rule” that we’ve been indoctrinated with and have had it drummed into us for so long its become “the norm”. The primary reason, we’re told, is that this is to protect our eyes, and prevent infections.

This “3 month rule” is also the reason for many people to go with a pharmacy or drugstore brand mascara. What’s the use of buying a more expensive mascara (never mind that it may look nicer) if we’re just going to toss it after 3 months anyway right? It’d be a waste of money! There’s a lot of truth in all that.

So come on, don’t be shy – Do you toss your mascara after 3 months? Even if its not gone bad or dried out? 🙂

Well I have a confession. I don’t 🙂

I never have, to be honest. I mean, I know the general rule and all that but I feel loathe to toss a product that is still working well just because its “the norm”. Its a waste of money too. Being a bit of a conspiracy theorist, I felt that this was a major conspiracy by the cosmetics companies to make us spend more money on mascara. I know right? I also believe in aliens and UFOs 😛 I usually toss my mascara only when its dried out or doesn’t work anymore.

Well, I’ve got one more thing to support my argument for not tossing out your mascara after 3 months – the cosmetics companies tell you you don’t have to! But how many of you notice this? 😉 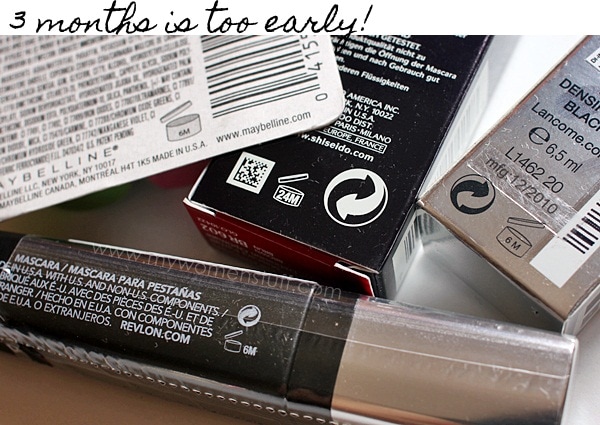 I’ve picked at random, some high end and pharmacy/drugstore brand mascaras and the minimum and average life span for a mascara that I see, is 6 months from date of opening. Its that symbol of an open tub that you will see on most packaging. The number inside tells you how many months you have from date of opening before it is considered expired, and they all say 6M barring the Shiseido one that weighs in at a staggering 24M! That’s 2 years! Actually, my Shiseido Perfect Mascara has been going strong and its been with me a while and is only now starting to dry out (no trouble in all this time).

However, if you have an eye infection I will suggest you toss any mascara you are then using during your eye infection, because it could well be contaminated. But if your eyes are fine and the mascara is working fine and not dried out, don’t waste your money. Look at the box/packaging. Think about things and see if its logical for you to just blindly abide by a “general rule” or if you should just go with your gut 😉

What say you, Ladies? Do you currently toss your mascara after 3 months? Will you change this habit after this, or will you still stick to the 3 month rule? My personal habit is why I don’t mind splurging on a higher end mascara that works (RMK and Shiseido are 2 I will readily replenish despite the cost) because they last, my lashes look impressively good, and I don’t toss them out after 3 months anyway 🙂

116 comments ... Read or JOIN THE DISCUSSION