Well, ok so I’m a BEAUTY judge, not Judge Judy 🙂

Its a secret I’ve been dying to tell for months, but its a secret no longer, that I was invited to be one of the judges in the Her World Beauty Awards 2012! *squeal* 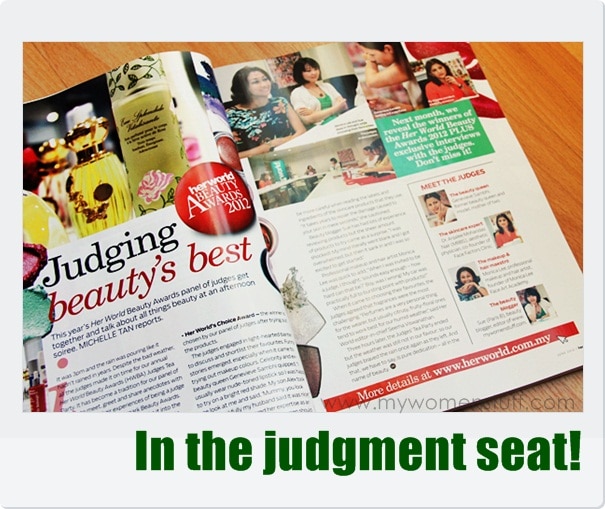 The Her World Beauty Awards (HWBA) is an annual affair where the magazine awards the best of the best products in a given category. When I ran the My Women Stuff Readers’ Choice Awards last year, I parodied it a little so it was a little gratifying to suddenly find myself being put in a situation where I had a say on what could be deemed the best in its category. A daunting task and it was absolutely fascinating knowing what goes on behind the scenes! Can’t share it all for now though I will soon 😉

Thanks to reader Sandra on twitter, I found out that there was already mention of the HWBA judging panel in the June edition so I ran out and picked it up. So please do excuse my narcissism in this post 😛

The list of winners of the HWBA will be announced in the July 2012 edition of the Her World magazine and I’m also curious to know who won. There were some categories where the judges weren’t quite on the same page about, so its going to be interesting to see which one ultimately won, since the Her World editorial team have a say too. I met some absolutely fascinating ladies who formed the rest of the judging panel, whose credentials totally slay me! You can read about them here. 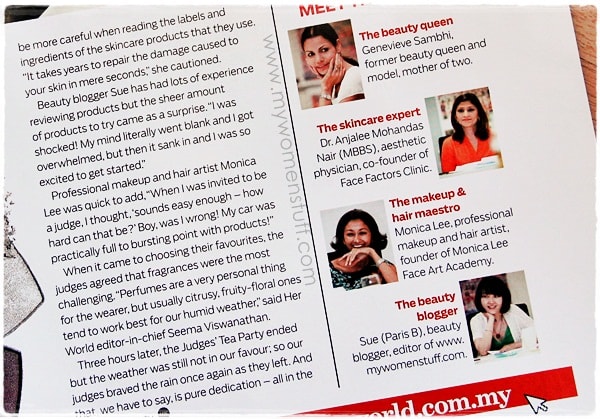 Apparently, there is an interview too. Oh dear. I gave some irreverent answers when the interview questions were posed so I’m actually cringing in my seat knowing that it will be published. Drat! 😛

So that’s about it for now. Thank you for indulging me my narcissism and thank you too to Michelle and all at Her World who thought about having a beauty blogger on board this year. I loved the experience and I am most gratified to have been accorded the trust and given the opportunity to have my say in this year’s Beauty Awards, irreverent or otherwise 🙂

To everyone who may have stumbled on My Women Stuff via the June edition of Her World magazine, I bid you welcome and I hope you enjoy your visit! Please say Hi, because I love hearing from you 🙂

PREVIOUS POST: Tip: Your sudden breakouts or acne may be health and food related
NEXT POST: Finally! The Breakdown of What is in that Epic Cosmetics Travel Kit!

87 comments ... Read or JOIN THE DISCUSSION