I was introduced to the concept of negative ions when I first came across salt crystal lamps like those in the picture above. These lamps are made from salt crystal rock mined from deep underground. A narrow hollow core is created and a light bulb inserted to create the (usually) orange glow. You might have seen these lamps at spas or reflexology centres.

These salt crystal lamps are supposed to give out negative ions, which are in turn, good for our well being. Negative ions are known to boost a person’s levels of the mood chemical serotonin, helping to alleviate depression, relieve stress, and boost our daytime energy. These negative ions are found in abundance in mountain tops, near waterfalls or by the beach amongst others. If you have ever gone up a mountain and breathed in the cool crisp air, and found yourself feeling good and refreshed, those are negative ions at work.

A lack of negative ions is also what explains the lethargy at work or at home if you are cooped up for long periods of time. So, when at home, try to leave your windows open so you get fresh air (and some negative ions) circulating. At work, its harder to do so. So, a salt crystal lamp is said to help with infusing confined spaces with negative ions. I don’t know how effective they are though. I think you’d need quite a lot of it, or a very large lamp to notice any effect in a fair sized room. I read that people who are sick have benefitted from having a lamp in their rooms as it helps with healing. However, I find that the glow from the lamp makes it hard for me to sleep at night.

I have a couple lamps myself and I got them because I like the glow they give and they make my living room look more cosy. This is especially so at night because I know I can walk into the living room without fear of bumping into furniture as the glow from the lamps give out enough light for me to see by. Not all of us can afford to go up to a mountain top to feast our bodies on negative ions and our eyes on an awe inspiring vista of mountains and plains, so a salt crystal lamp is a much cheaper alternative.

I got mine from a distributor who gets theirs from Poland. They were featured on Majalah 3 a couple of years back. Poland has large reserves of salt crystals underground and salt crystal lamps are a triving industry there. There are also many cheaper options that hail from India and Pakistan.

When choosing a salt crystal lamp, I like those that are more translucent with less opaque areas. Those are also usually more expensive as they are of higher quality salt crystal rock. Colours range from a light pink to a deep orange-red. Apparently, different colours have different effects on a person’s mood. A lighter shade has less effect on moods and some pink or light orangey shades are soothing, while darker shades or redder shades are more aggressive. I just choose whichever colour catches my eye at the time.

Make sure the seller lights it up for you, and turn it all around so you know how it looks from all angles. Sometimes, there are cracks that aren’t obvious until lighted up. I was told that the lamp chooses you, not the other way round, so when you have many to choose from, the one that catches your eye first is the one you should get for maximum effect. Is it a load of hokey? I don’t know, but so far, I’m enjoying my lamps for their aesthetic value and if its healthy too, all the better! 🙂 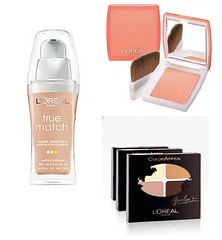 I was out of town this long weekend and had a dinner to attend. I had packed up all my skincare and makeup, but to my horror, when I arrived at my destination, my toiletry case was not in my travel bag!

I wasn’t so keen on appearing at a function with a bare face, and I was in a relatively small town without any major department brands available to me. Not wanting to spend too much money on makeup, I dropped by a pharmacy/drugstore to see what they had.

I’m happy to report that they turned out to be gems in hiding for they served their purpose well, and looked good too. After a 10% discount (thank goodness for sales! Yay!), the 3 items came up to RM128 plus a free gift of a tote bag and makeup pouch which I gave to my Mom.

I try to do individual reviews for each item in due course but suffice to say that if you need makeup in an emergency, these 3 items are a great drugstore find and will not burn a large hole in your wallet!

The last fortnight saw me being rather busy at work so I was not able to blog-hop as much as I’d like. However, I still managed to pick up some articles and some new sites which interested me and which I felt would be instructive.

Till then, stay beautiful!