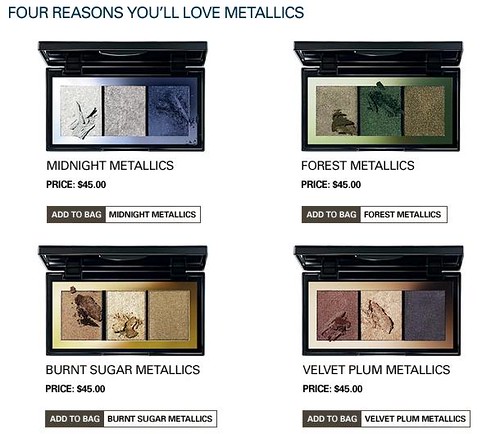 Acting on a tipoff from Cass (who has given her own take on what she thinks) I went to check out the Bobbi Brown Metallics eyeshadow trios today. I went to the standalone Bobbi Brown store at Midvalley Megamall. I was quite excited for this collection to come out so it was great to finally be able to see it in person.

First of all, I’d say that the trios are a good size this time. They are quite large and a nice size in nice packaging. The metal edge surrounding the eyeshadows correspond to the colours in the trio just as you see in the picture above. Its a slim compact and very useful. However, unlike previous Bobbi Brown collections, this one has no brush included. I found it strange because Bobbi Brown usually tries to make things as user-friendly as possible.

In pan, the eyeshadows look soft and shimmery and well, metallic. However, the texture of the eyeshadows were not as soft as they look. The middle colour of the green trio in particular must have been touched a lot because a hard surface had formed which made it hard to get colour on the fingers. It made me wonder if it would get like that after a few uses.

As Cass has said, the colours don’t show up nearly as true to the pan. If they did, it would have been awesome. But what you get is a slightly more muted version of the colour in the pan.

Midnight Metallics
My favourite of the lot. The dark blue is dark enough while the silver and white makes a good contrast. The middle silver is “Rockstar” but quite different from the original Diamond Dust Rockstar which I love.

Forest Metallics
I love green shadow but this was a mess. It was dark and on small lids, if you try to get the middle vibrant green to show, you won’t be able to. Its a very dark trio. I smudged the middle green on my hand and got mud. You really need to dig in to get it to show up the vibrant green in pan.

Burnt Sugar Metallics
Blah. I don’t know anyone who’d bother. Its just 3 light shades with not much definition in between. If you like neutral tones yes, maybe it works for you but if you already have a ton of neutral tones, skip it.

Velvet Plum Metallics
Don’t let the picture fool you. This is no plum. It was a taupe trio. I rather liked this one because the dark shade was sufficiently dark to be a contrast shade and the light shades worked together. If I did not already own a whole host of taupe shades, I would get this one.

The Sales Assistant told me something strange though. She said that the colours were designed to work individually. I gave her a strange look and said “But that defeats the purpose of having a trio right?” She did not reply. Don’t you agree though?

To be fair, each colour is very pigmented which is good. But if you aren’t very good with doing eye makeup, you may find it too easy to make mistakes because the dark colours are very dark while light colours are light. If you are looking for high shimmer or a metallic tone, then you will be disappointed because there is a rather matt look about them once applied.

However, if you are looking for a smokey eye look, I’d recommend the Forest Metallics. I think it will be awesome for a smokey eye. The Midnight Metallics too will work very nicely for anyone who wants a lovely silvery-blue eye. If you prefer something for everyday, then look at the Velvet Plum Metallics or Burnt Sugar Metallics.

Each trio retails at RM150 and are limited edition so its while stocks last. These are gorgeous quality eyeshadows but I’d recommend you take a look at them first before buying, to see which suits you and your needs best.

I’m sorry Bobbi – I really wanted to love this one.

PREVIOUS POST: Why do you need so many blushes?
NEXT POST: Do you have a Beauty first aid kit?