I’m not quite sure where I first saw the Bobbi Brown Luxe Eyeshadow singles. It could have been online, where I get most of my beauty news. I don’t usually go for single eyeshadow, but for reason, I was taken by these.

There was very little information online for some reason. It was not until I read about them launching in the UK in December 2017 that I hoofed down to a local Bobbi Brown counter to have a look. That was when I found out that locally, they had been out for a month or two! (Based on what the SA told me) Uh… what?! And about half the shades were already sold out. 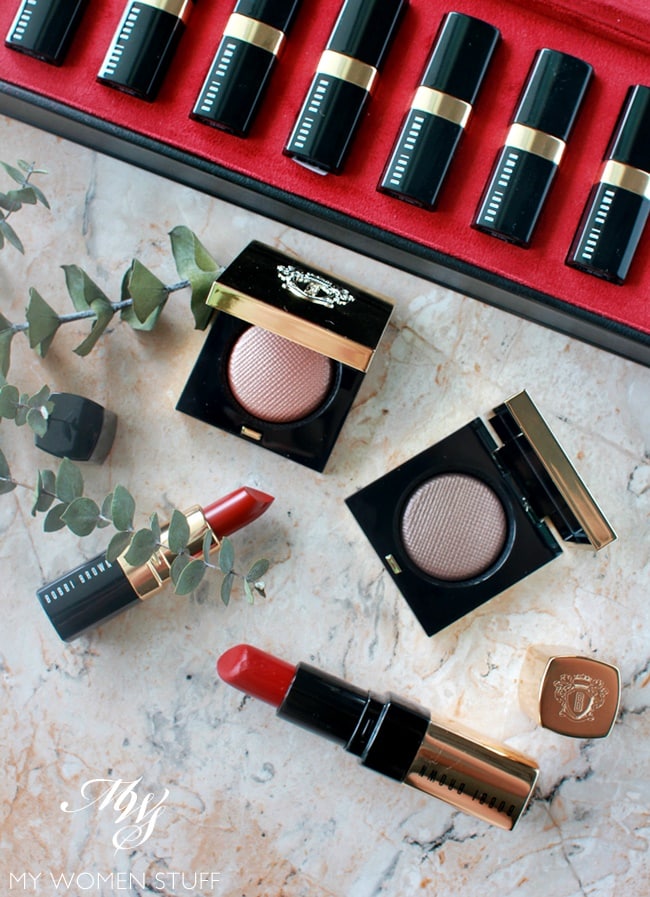 But can lor… I had a lovely girl helping me, so I had a play with the colours that were available. These single eyeshadow come beautifully packaged in a square case, and a gold cover. You cannot depot them, as there is no pan. I found this out, as one of the shadows in store popped out of its case.

The Bobbi Brown Luxe Eyeshadow is supposed to be a new formula, boasting a luxe, metallic, iridescent texture. They come in 3 textures – Rich Lustre (satin formula but with a sparkle), Rich Metal (a metallic foil effect) and Rich Sparkle (a brilliant sparkly shine).

What you can expect from these shadows, across the board, are shine. If you prefer matte formulas, please look away. There is nothing for you here. You must enjoy eyeshadow with a shine. It just depends on how shiny you like them! :D

I played around with the colours and I must say that my tastes ran to the Rich Lustre shades. The texture was satin to the touch, and very smooth. It was shiny, but as the name implies, a more lustrous shine, like the shine on velvet, and not that of sequins. They were also incredibly pigmented! Goodness, I have not been so excited about an eyeshadow in a long time! :D 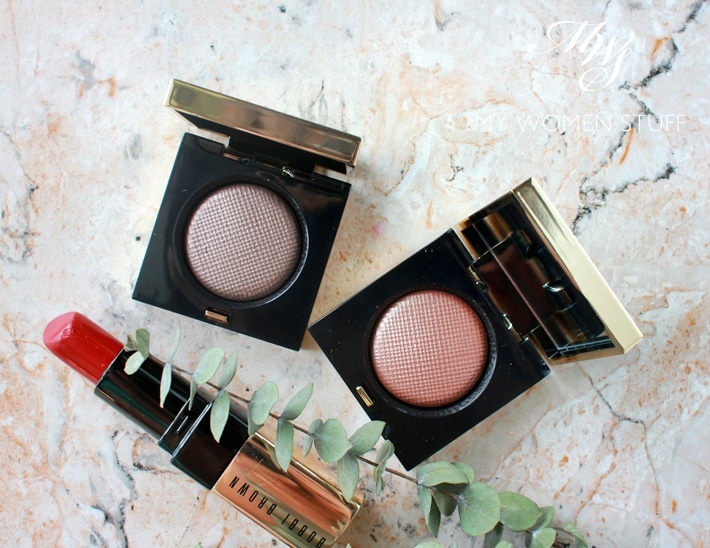 I hmmed and hawed for a while over two beautiful greens (Poison Ivy and Chlorophyll) but I talked myself out of them at that time, as I was not sure how often I’d wear them. However, I have been thinking about them ever since, so I think I will eventually go back and pick one of them up! :D I do love wearing green on the eyes, I just don’t wear it as often now as I used to and really, I do think I should live a little :P

What I did eventually walk away with was Liquid Mercury and Metal Rose. Now, Metal Rose is a shade that I wouldn’t normally use. It is a rose-gold and when I wore it on my eyes, I realised it is a little warmer than I like. But I do like the pop of shine it gives, and I like wearing it on its own, because it is a little different from colours I normally choose to wear.

Both these formula are Rich Lustre, and you will see from the swatch below, that is it strongly pigmented, and gives off a shine but is ultimately very wearable. Rich Metal and Rich Sparkle are very sparkly, and are more suited to those who prefer a more bling look. These however, you can wear to work quite comfortably without batting an eyelid. Or maybe you’d like to bat your eyelids anyway LOL! :D 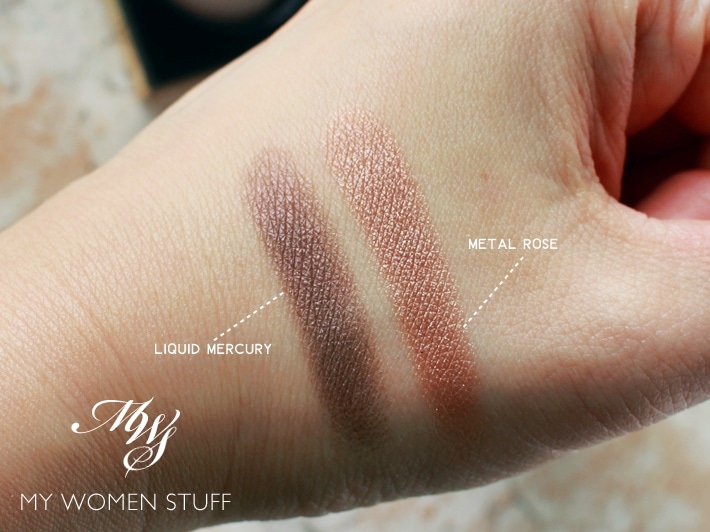 Liquid Mercury is a slightly neutral toned taupe with a purple-grey tone. It was a colour I easily gravitated to, as I saw potential in wearing it on its own, or as a crease shade. You may notice from the swatch that it is not as shiny as Metal Rose, and you will be correct. I find this one incredibly pigmented, whether applied with fingers or with a brush, but it is not as shiny, having more of a satin texture.

Metal Rose is more shiny, as the swatch shows, and is rose gold that leans a little warm. It is not a shade I’d pick, but for some reason, I gravitated towards this. It might be because the girl helping me had it on, and it looked pretty on its own with just black eyeliner. So I was kind of suckered in hah! :P

To be fair, these shadows actually remind me a lot of a previous Bobbi Brown Diamond Dust single metallic eyeshadow with a similar formula where I bought one in Rockstar. It was a beautiful grey with sparkles, and I still own it and sometimes still use it even though it’s ancient :P The difference is the texture. That had a grittier feel. These are smooth and easy to pick up with a brush or fingers.

I picked these shadows for use both separately, and if I so liked it, worn together. I find that Metal Rose gives a bit of accent to the depth of Liquid Mercury, and adds some shine as well, so they go well together. But I like them best worn separately, because it is seriously a no-brainer. A literal swipe on and go shadow!

Also, you can wear them wet. Dampen a brush and pick up colour and apply to your lids. It intensifies the colour and shine and really does look quite stunning! I saw this technique used with Chlorophyll (a sparkly bright green) and I love how it looked! It’s been haunting me since :P

Just by way of quick examples as to how I’d wear these shadow, here are 2 looks I did. As I do not proclaim to be any good at applying makeup in an imaginative manner, these are just very simple, day-to-day looks. 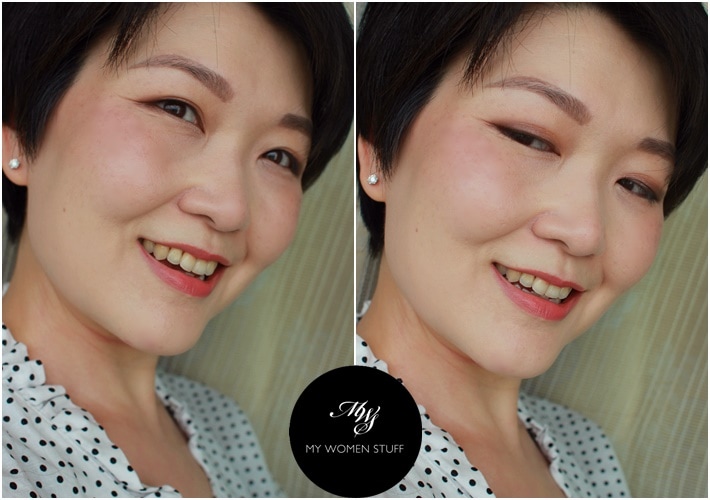 I wore both the shades together here, with Liquid Mercury on the outer edge of the lid, and Metal Rose on the inner for shine. I also brushed Liquid Mercury along my lower lash line for definition, and used it wet to line my top lash line. You can really make it look quite smokey if you like, but this was just a daily wear look, so it isn’t complicated. I’m sure you can come up with something more impressive :P 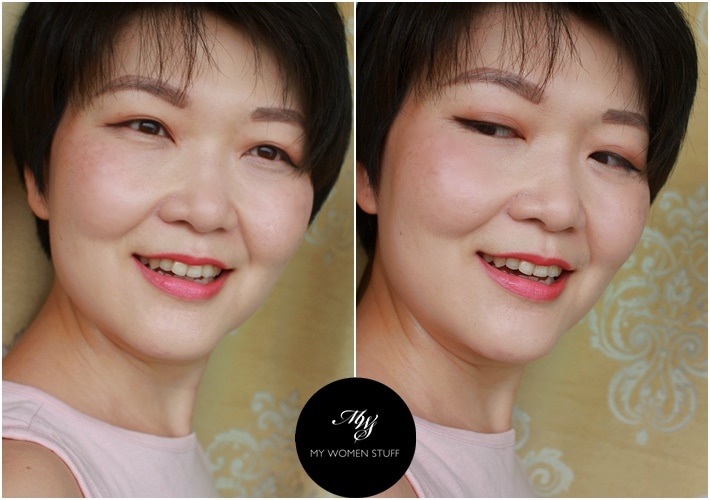 This one is just Metal Rose on its own, with a thick Bobbi Brown Gel Eyeliner in Black. for accent. On its own, I was not too impressed with the colour on me. But paired with a thick, dark liner, it worked. I think the colour is very current, and gives off quite a young vibe, if you keep the rest of your face light and fresh.

I personally love these shadows. I have read complaints about them not being pigmented, but I think it is more to do with expectations than formula. If you regularly use shadows from brands like Urban Decay that are bright and saturated with colour, these are kind of meh. The Rich Sparkle shades in particular may have fall out. But if you wear eyeshadow from Dior, Chanel, or Bobbi Brown or less saturated colours, these are beautiful and pigmented and boast a lovely shine. Manage your expectations :)

The Bobbi Brown Luxe Eyeshadow are eyeshadow singles that come in 3 formula – Rich Lustre, Rich Metal and Rich Sparkle. The colours are pigmented although there are not many shades in each formula. I find the textures smooth, and for the most part, pigmented. There is sparkle however, so it will not appeal to anyone who prefer a matte eyeshadow texture. In store I was told that they are limited edition. But online, I see that some shades are limited edition and some are permanent. So I’m not too sure. I’d just get them while you can, if you like easy to wear eyeshadow colours, with a lovely shine or sparkle, and a lovely formula.

PROS: Easy to wear colours that can be worn together with other colours or on its own, Smooth texture, Easy to pick up colour with a brush or fingers, Easy to blend, Pigmented colours, Can be used wet or dry

WHO WILL LIKE THESE: Anyone who likes eyeshadow with sparkles, Anyone who wants an easy to wear single shade eyeshadow that can be worn wet or dry 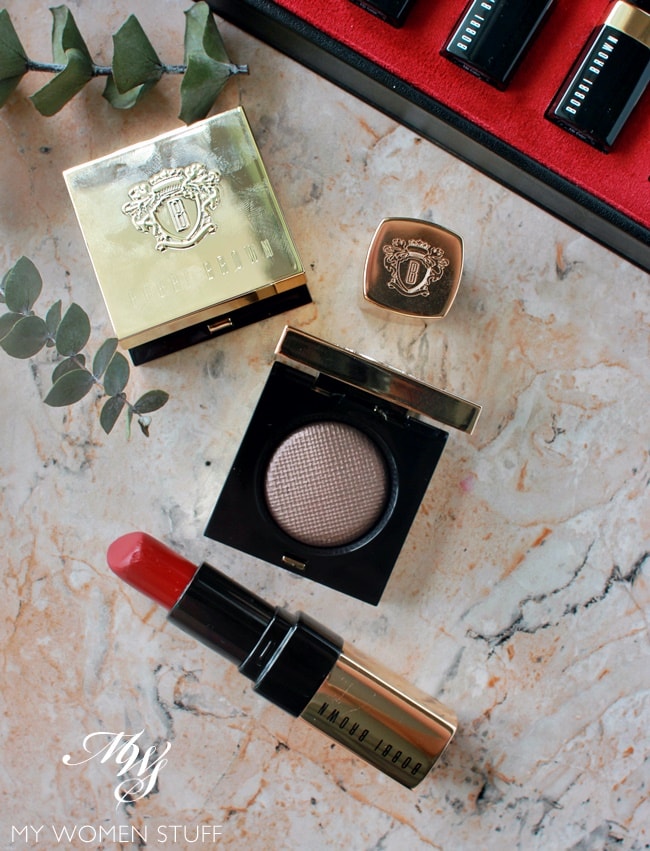 Had you heard about these Bobbi Brown Luxe Eyeshadow? Did you get any?

I’m not sure why it’s so low-key, because I think it’s a fabulous range of single eyeshadows. The price however, is quite prohibitive, so I can understand why you might balk at paying that for one colour! I’m still dreaming of Poison Ivy or Chlorophyll though. I guess I’d have to get one :P

PREVIOUS POST: I wasn’t sure if I’d like the Shiseido Sports BB Broad Spectrum SPF50+Wetforce till I understood it better and now I’m in LOVE!
NEXT POST: Note to myself (and to you): Stop hoarding your skincare and USE IT!