If you’re on my Instagram, you’d be most familiar with my love for food and my #EatatChezPB hashtag. I’m a foodie, always seeking out new and interesting places to eat, but I also cook. In recent times, I’ve decided to incorporate a little more of that interest, because that’s who I am. Hence, “Eat at Chez PB” – “Eat at PB’s house”. No, that’s not quite a literal invitation LOL!

A few years ago, I used to marry these two interests in a weekly food segment. I dropped it for various reasons, time being chief among them. But I’ve decided to bring it back in a slightly more irregular fashion with a focus on food I cook, not food I eat. Eat at Chez PB is my domestic side that potters about the kitchen, and spends hours eyeing kitchen gadgets and cookware, dreaming more of that perfect kitchen, than the perfect beauty room.

I cook, but I’m no Masterchef. I chiefly do simple dishes and meals, often for 1-2 persons, but scalable to feed more if desired. MWS is a beauty blog, but I’m sure you realise by now that it has more aspects to it than mere beauty. Eat at Chez PB reflects that. 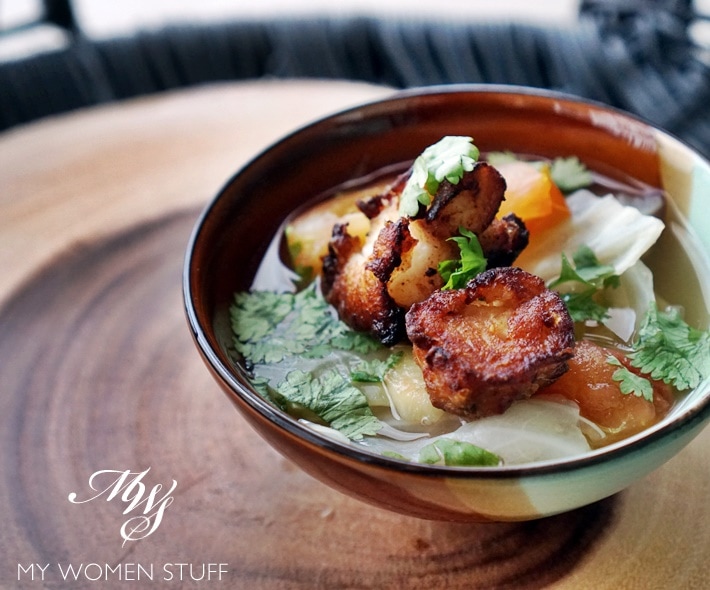 By way of a disclaimer, I may not necessarily focus on “healthy food”. I like cooking food as they are meant to be eaten, so if it is deep-fried, it will be. If it calls for butter, I use butter. I subscribe to the Nigella Lawson style of cooking – rich flavours, no skimping on ingredients. I make no apologies for it 🙂

I also operate off a guesstimate method of cooking, as a lot of cooking depends on your personal tastes and preferences. I again, make no apologies for this. Often, using more or less of any ingredient doesn’t really matter – this isn’t baking, which is an exact science. It’s cooking – cook from your heart, and to your taste, not someone else’s.

To kick off, here’s a fairly simple dish I have modified over time to make it very easy, and importantly, tasty. This is a version of clear Asian style Fish Soup that you can have on its own, or with rice or noodles as you wish.

I prefer to pan-fry the fish separately instead of cooking it in the soup, as I’m not a fan of the fishy taste that accompanies soups like that, and the texture of the fish afterwards. Also, this seasoning I use to pan-fry the fish will, I promise you, kill that fishy taste and smell associated with eating fish, especially if it’s a stronger tasting, oilier fish. I also prefer using boneless chunks of meat, because it’s just easier to eat, and the seasoning penetrates each small piece better than a large slice of fish.

I suggest using a white fish, which has a milder taste and sweeter flavour. Examples from our local fish market are garoupa/grouper (kerapu) or snapper (ikan merah or jenahak). But oilier fish like mackerel (tenggiri or batang fish) work as well. I wouldn’t use salmon (I’m not a fan of it unless in sashimi) or cod simply because it’s too expensive locally. So work with what you have available locally. I actually came up with this seasoning to mask the fishiness of oilier fish, especially after they’ve been kept in the freezer a little while. 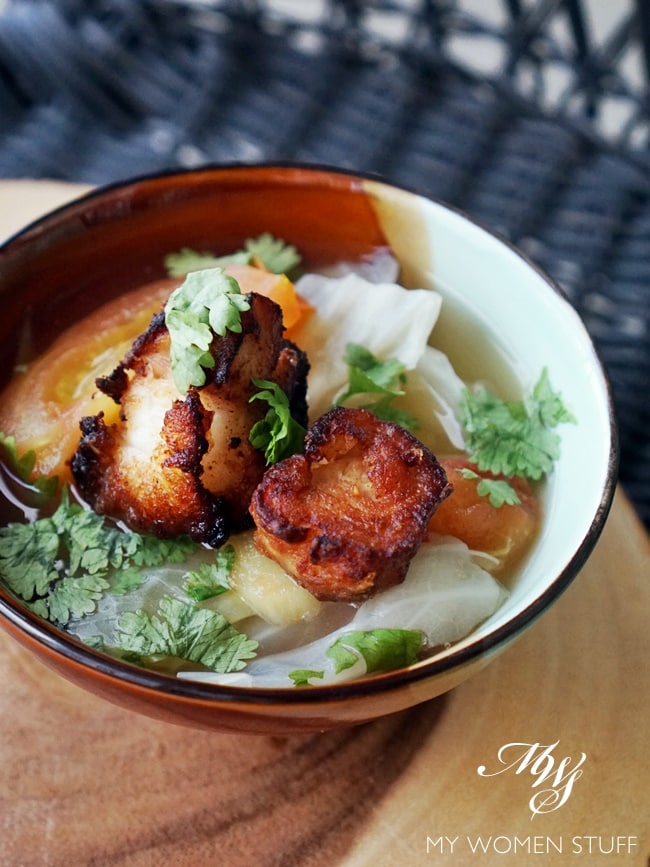 What you will get, is a fairly clear tasting soup from the dried anchovy (ikan bilis) stock, with a hint of sourness from the fresh tomatoes, and sweetness from the cabbage. You may opt to use other vegetables instead, and the flavour will adjust accordingly. I suggest cabbage or Chinese cabbage (Napa cabbage), as it will sweeten the soup further, and you can cook it a while. Green leafy vegetables will wilt very quickly but may be added by blanching it quickly in the stock.

Serve it over noodles or rice, for a simple one dish, one bowl meal you can eat in front of the telly, if you so wish, or to enjoy with family at the dining table on a cool, rainy evening. If using, add a dash of Shaoxing wine before serving for better aroma and flavour, or even brandy, if you like that kick 😉 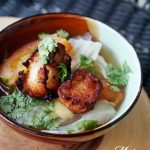 A simple version of a clear Asian fish soup with pan-fried fish, that you can have on its own or with rice or noodles.

I know I promised a few of you on Instagram that I would share this recipe, so it is my first in my Eat at Chez PB series. I will continue to experiment, and to cook and will share more simple recipes when I can. But you can always find me experimenting over on Instagram at @parisbmws or #eatatchezpb. Some will make it here, some won’t. It depends on how successful they are LOL! 😀

Do you make a fish soup like this or a variation of it? Any suggested modifications that work?

If you try this, I’d love to hear what you think, so please let me know! 🙂

PREVIOUS POST: Your Say: Has NARS Cosmetics’ decision to sell in China affected your perception of the brand?
NEXT POST: The Chanel Les Beiges Healthy Glow Gel Touch Foundation is like a cushion foundation but isn’t