Sunday Riley Luna Sleeping Night Oil is one I lusted after, thanks to the many raves online when it first came out over a year ago. I hmmed and hawed for a while before eventually pulling the trigger, and ordering it online, because we don’t get the brand here in Malaysia.

I’ve had it for something like a year? Maybe more. I bought it not long after its launch (suckerrrr!) and I’ve been kind of struggling with this for the better part of a year now. 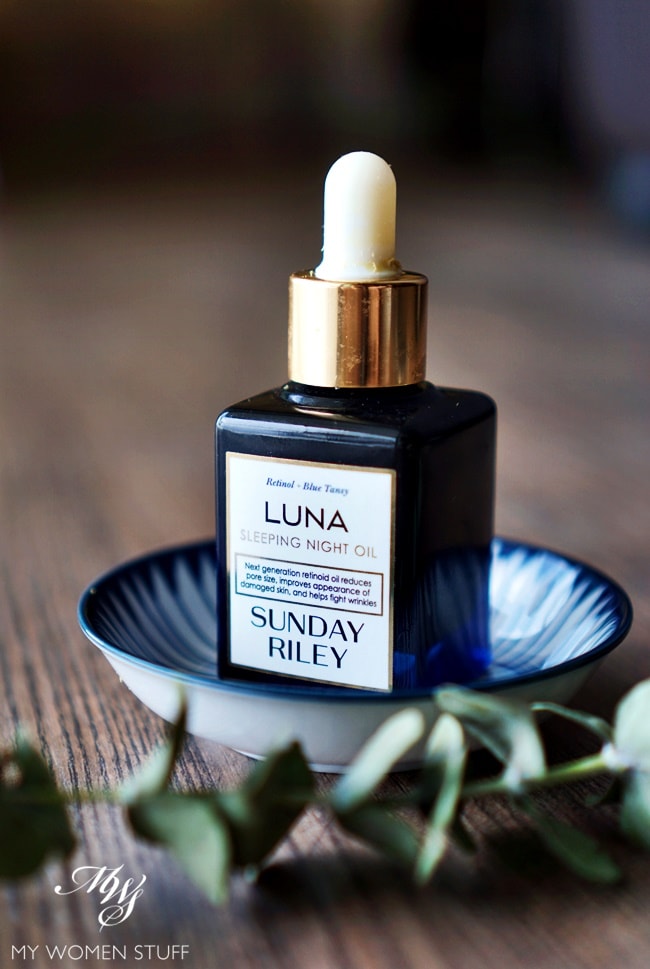 The biggest problem with the Sunday Riley Luna oil, is the price. I bought it for £85 which is a jaw-dropping sum of money to drop on a product I wasn’t sure about.

When I was first interested in it, the Luna Oil came highly raved by many big bloggers, who claimed it made their skin so smooth. Further, the addition of retinol in an oil was a unique formula. Sunday Riley claims that the Luna oil contains an advanced retinol complex, that visibly lessens lines and wrinkles, while correcting damage by the sun, time and exposure. And it does all this while you sleep, as it is an oil you want to use only at night. They even claim that pregnant women shouldn’t use this, indicating that the retinol content is high enough to transfer to the bloodstream and affect unborn foetuses. On top of everything, it claims to be non drying and to offer up plumped, luminous skin.

The problem is, I’m very conflicted about this product. On the one hand, I actually don’t mind it. It’s not bad. But on the other hand, I feel terribly cheated and that has made me side-eye all Sunday Riley products henceforth. I don’t even want to buy any other products from the brand (for which my wallet sighs in relief LOL! 😀 )

Now, first let me tell you about the product, because I’ve been accused of allowing my feelings to get the better of my review. Meh. Everyone has an opinion 😛

Sunday Riley Luna is that famous blue oil that you would see often on Instagram. It is distinctive and eye-catching and the bottle has lovely aesthetics. 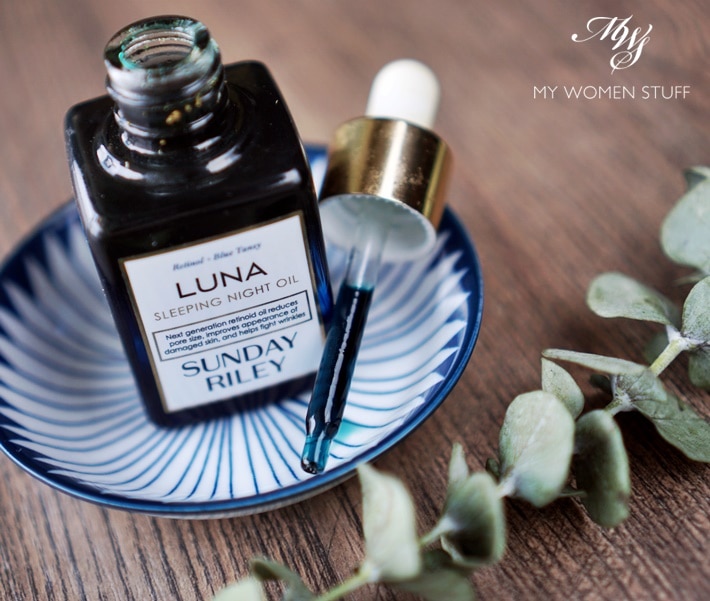 This is targeted to be used only at night, which makes sense as it contains retinoids. Retinols tend to make the skin sensitive to the sun so using it at night is the best thing to do.

The texture is quite oily (not a dry oil texture) but it absorbs easily for me. I do use it on damp skin to make it go on more easily. I usually use about 3 drops each time. But as I read that some people experienced dryness (retinols can be drying) I made sure I upped my hydration whenever I use this. So I personally did not experience any dryness from using the Luna Oil.

When I use it regularly (nightly) I do notice that my skin likes it. Pores look smaller and skin looks more refined and smoother. It’s noticeable. On the flip side, a friend told me this breaks her out every single time she uses it. So, really, mileage will vary.

Because you only need so little product each time (2-3 drops, warmed up between your palms and applied to skin) it will last you a long while. And because you only use a little product, it does not actually stain your skin blue. I have read people saying that their skin takes on a blue tint when they use this. I personally do not notice this.

However, when I drop a drop on the back of my hand, and then blend it out, I do notice a very slight blue tint. See if you can see it in the picture below. 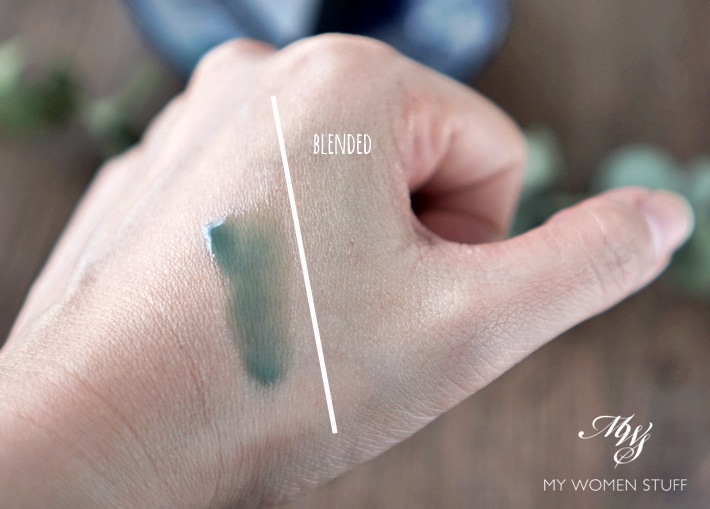 On right, where I blended out the Luna oil, you may notice how the skin looks a little ashy. But when I apply it on my face, I don’t notice it. It’s actually too light for me to notice.

So, just stopping right here for a moment. At this point, I’d be happy to tell you that it was worth the money I paid. My skin takes well to it, because I do notice the improvements and I like how lovely and smooth and refined it looks. The scent, which is floral and strong, and which I was warned about, didn’t trouble me as much as I expected it to.

In a normal situation, I’d say, I’d be happy to recommend it, if money was no object.

But I won’t because as I told you above, I felt cheated. You see, when Sunday Riley first launched the Luna Sleeping Night Oil, I was paying attention. It wasn’t hard to, because all the big skincare bloggers were touting it (I have also noticed that many of the big skincare bloggers no longer mention using it. Hmm…). It helped that it was blue, because it was unique and that made it stand out. 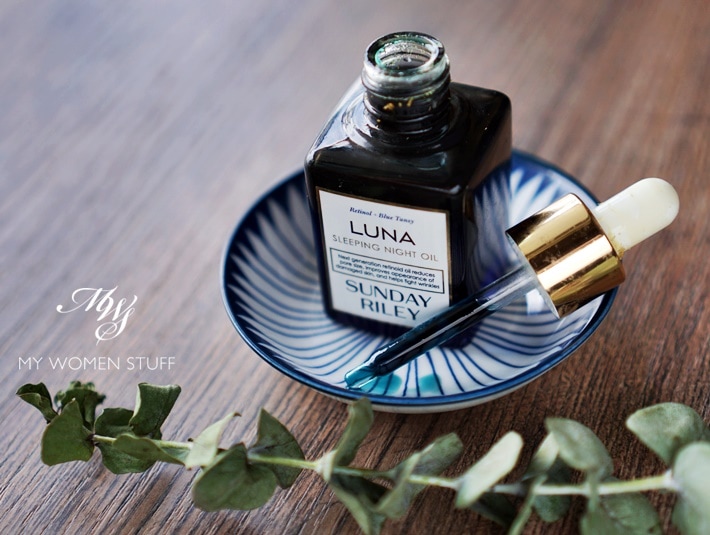 I remember quite distinctly, when questions were asked about why the oil was blue, the answer came quick and fast – because it contains blue tansy. That is listed right on the label, and it’s a known ingredient to soothe skin. It also has a very distinctive blue colour. I also encountered blue tansy in the May Lindstrom Blue Cocoon (which I love) which is also blue but May uses only natural blue tansy to achieve the colour, so each tub is different depending on the batch.

So, that was the story initially. The oil was blue, because it contains blue tansy, which makes it blue. It’s what many people still believe, whenever I come across more recent reviews. However, some intrepid people soon started calling out the bullshit, because on the ingredient list was listed colouring that made up the colour “blue”. Eventually, the brand acknowledged that the blue colour was due to the added colouring. That totally spoilt it for me.

I had been following the reviews and feedback for a while, and when the news broke that the blue was just pure and simple colouring, I was very disappointed in the brand. The colour was unnecessary and clearly, only a marketing gimmick, for otherwise, there would be no need to add colouring into the ingredients. Further, as many people had also pointed out, the ingredient list does not boast very many expensive oils. There is no real indication of how potent the retinol is, and there is quite a large number of fragrant oils that can be irritating to skin.

By this time, I’d already owned the Luna Oil for a few months, and as disappointed as I was, it was a large chunk of money I had dropped on it. So, I will use it. I still like its effects. But I don’t use it very often now. A few times a week maybe? I’ll make sure I use it up too. It’s all money spent! But I won’t repurchase, I won’t recommend it and I am no longer buying anything else from Sunday Riley. My wallet is very happy with this decision, as the products cost an arm and a leg (although I really did like using Good Genes) 😀

The Sunday Riley Luna Sleeping Night Oil is a facial treatment oil that contains retinol. It is meant to be used at night, as part of your evening routine. I use about 2-3 drops each time, on a mist-dampened face which helps it absorb more quickly without a residue. I also apply a moisturiser over and I up my hydration serum and lotions, because retinol can be drying on skin. I do find that with regular use, my skin looks more refined and pores actually look less noticeable. So, I quite enjoyed using it despite the floral scent. However, I will not recommend it as it contains colouring in order to get that blue (it is not blue tansy) and it costs far too much for a product that doesn’t have significant expensive oils in it.

CONS: Strong floral fragrance, Contains unnecessary colouring to make the oil look blue, Some of the oils can be irritating to sensitive skin

WHO WILL LIKE IT: Anyone who can afford it or who wants a fairly gentle product that refines skin

WHERE TO BUY: Sephora (US), Cult Beauty, SpaceNK

Here is the ingredient list for the Sunday Riley Luna Sleeping Night Oil:

Have you tried this Luna oil?

It’s so expensive, but I think they had a set with a smaller bottle a while back that was a little more affordable. I personally do like it, but I can’t get over how cheated I feel about why the oil is blue. Perhaps it was because I remember when the whole story was about the colour being attributed to blue tansy, before people were brave enough to call them out on it. I’m not particularly averse to colouring in products, but I don’t like it when I’m fooled into thinking the colour is natural, when it isn’t. So yeah. No more Sunday Riley for me. Not that it matters to the brand LOL! 😛

72 comments ... Read or JOIN THE DISCUSSION