I very recently came across something new to me, in the beauty vlogging world – Anti-haul videos. I haven’t really seen it on blogs, but it’s not to say that it isn’t out there. It probably is. What an “anti-haul” video or blog is, is pretty much the antithesis of a haul video or blog. Instead of sharing what the blogger or vlogger bought (or got gifted), they share what they will NOT buy.

I thought it to be an interesting concept, but I noticed a trend running through these type of videos or posts. 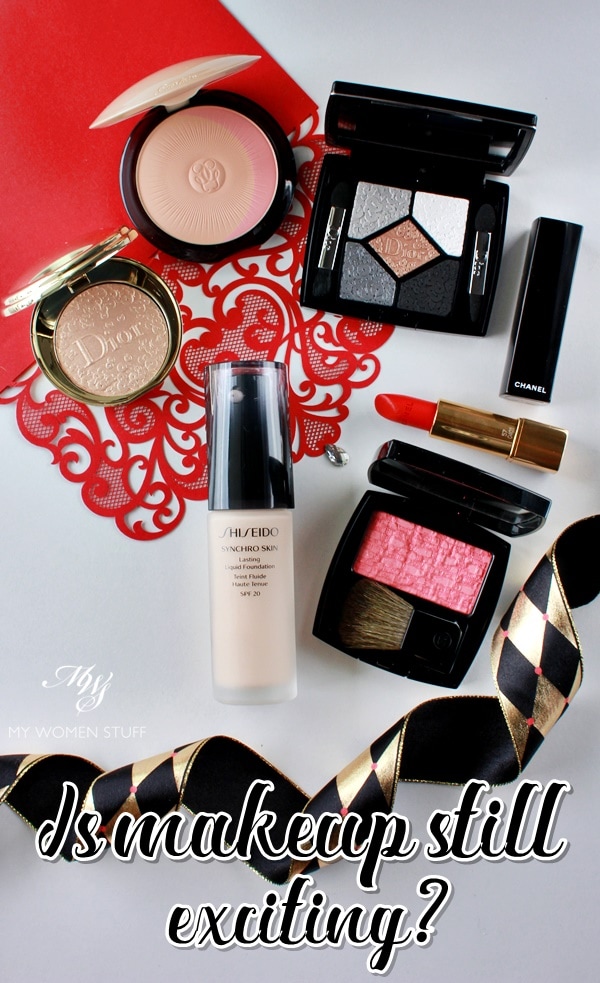 These sort of videos or posts are pretty much made for readers or followers who already own a boatload of makeup and beauty products. It acts like a brake, to make obsessives stop and think, but it is also rather selfish, I feel, for it isn’t terribly helpful to someone who doesn’t own an Ikea Alex drawer full of makeup.

It made me wonder if the beauty blogging/vlogging world isn’t experiencing some sort of makeup fatigue. I sometimes feel it, don’t you?

I feel this fatigue most when the seasonal collections pop up, and when festive gift-giving seasons comes around. Suddenly, you can’t move for gift guides or gift suggestions for all the people and pets in your life. Most of them are chock-a-block with affiliate links – it’s a good time to be making money, for those who have a large following.

I’ve done the gift-guide thing back in the early days. Back then, I thought it was fun. It was a fun way to round up some of the better buys I’d come across in a year, as gift ideas. But it stopped becoming fun when the market got so saturated with gift sets and limited edition sets, and it felt like a race trying to catch up. So, I decided to step out of the race. Made me happy :)

Yet, that’s not what I’m on about. What I’m really on about is this – are people experiencing makeup fatigue, that new makeup just doesn’t interest them anymore because it looks just like everything else they already own? Is this feeling being transferred to readers and followers? Do you feel that way, when you read a blog or when you’ve been following makeup trends for a while?

An example of an anti-haul post :D “I won’t buy yet another gold highlighter and red lipstick. Christmas. Boooring! I won’t buy another boring old silver-gold themed eyeshadow palette,  and that bronzer? It’s too light to be a bronzer. Don’t buy these” Pity, they’re already mine LOL :)

This phenomenon would be most felt by someone who owns a large collection of makeup, but who isn’t a makeup artist. Makeup artists use their makeup often, as a tool of trade, so a large selection is normal. But really, a regular makeup user doesn’t really need all the Urban Decay Naked palettes available (how many are there anyway? 5?) alongside all the other limited edition makeup, and 4587 brown eyeshadow.

I confess to often feeling bored at yet another launch of a palette or lipstick. Yes, I’m the one going “Not another neutral palette?! How many does a girl need?”

Yet, I also realise that not everyone’s got a drawer full of makeup. It’s actually not the norm, no matter what I believe LOL! :D While brands create the excitement of a new palette or lipstick, they are also catering to those who don’t already have a neutral palette or red lipstick; perhaps even someone starting to build their own makeup collection.

So, while I am personally quite fatigued by the general push to buy that newest and latest makeup palette or lipstick or blush or highlighter, sometimes, a new and innovative product does still stir that frisson of excitement. Usually, that happens with a new foundation or concealer (boring, but they are the building blocks of your makeup!) or maybe even a blush. I know, I have too many blushes to count – no girl needs that many :P

Personally speaking therefore, I feel that as bloggers, we shouldn’t measure makeup users by our own standards, which are unusual at best. If there is a new neutral palette out, that looks just like the 23498 neutral palettes you already own, you’re the exception, not the rule. Someone out there may like it, and appreciate it.

Some people like cutesy makeup. Some people like pretty packaging. Some people like having lots of neutral eyeshadows and a multitude of red lipstick. I think everyone should be left to form their own opinion about whether to buy or not to buy something. So maybe, we should do away with ALL gift guides LOL :P

Have you watched these anti-haul videos? Are you still excited by new makeup products?

I watched a couple, but couldn’t quite get into the concept. I understand where a lot of them are coming from. It’s like the counter-point to the “rave rave rave” culture that’s perpetuated on YouTube. Yet, I feel it’s a bit of a disservice to those who are new and who don’t already own 2348 eyeshadow palettes. Some new palettes are boring, I agree. But a makeup newbie may not think so. I still get excited by some new makeup products. I may realise that it is yet another boring neutral palette, but hey, it’ll always be able to find a home with someone out there! :) What do you think, whether as a makeup user or collector or just as a reader or blogger? :)

PREVIOUS POST: This cool autumn season, take a walk with me in the Pupa Velvet Garden
NEXT POST: Expanding my cream cleanser wardrobe with the Antipodes Grace Gentle Cream Cleanser