Welcome friends, to Day 2 of Cushion Foundation Week on My Women Stuff! 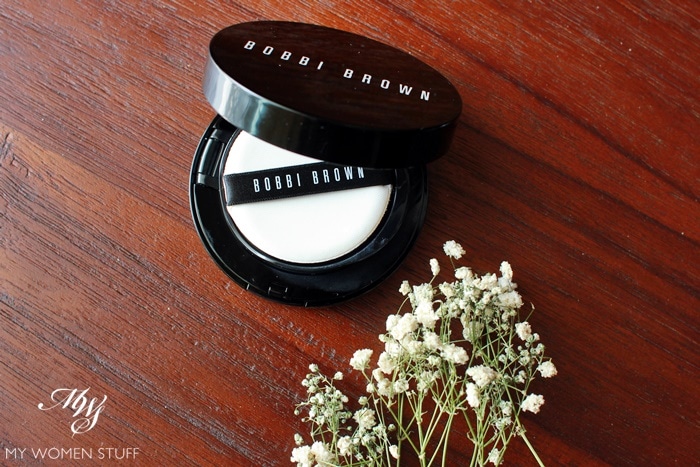 Today’s cushion foundation from a western brand, was one of the first I had the opportunity to try, a few weeks before its release, and it’s just become available at counters not very long ago. It’s the Bobbi Brown Cushion Foundation and I’m pretty impressed by the wide spectrum of shades it comes in! 6 shades!

I was a little surprised when I first found out that Bobbi Brown was coming out with a cushion foundation. If I’m to be honest, Bobbi Brown isn’t exactly at the forefront of innovative makeup (sorry, BB fans!) but I suppose that with all the Korean brands already available in the market, they had to get on the bandwagon or be left behind! It was nice to see BB get in quick and early.

According to Felix Nguyen, makeup artist for Bobbi Brown, this cushion foundation fared very well with the ladies in Korea, much to everyone’s surprise! Apparently, it sits very well on their skin and gives them the lovely Korean glow that everyone strives for. I’ve also read that this Bobbi Brown Cushion Foundation is an Asia-exclusive but I’m unable to confirm this.

Cushion foundations are sometimes marketed as skincare or tinted sunscreen, because of the high sunscreen protection it offers. This cushion offers SPF50 and PA+++ sun protection that is very high and broad-spectrum, and perfect for where I live. I however, use this on top of regular sunscreen, not as a replacement for it. I’m kiasu that way 🙂

The Bobbi Brown Cushion Foundation comes as only 1 product – a case with the refill and a sponge. There is no refill offered in the same box, although you can buy refills separately. 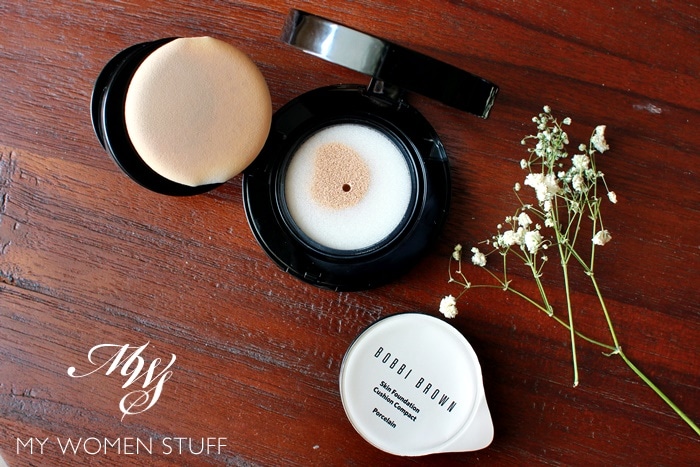 The refills resemble coffee capsules ala Nespresso capsules, which is apparently a nod to one of the ingredients, which is caffeine. It however, comes with a new sponge. The cover of the cushion is therefore attached to the case, which is, I believe the only cushion foundation designed in this manner. This has pissed off purists, but I like to think that it’s a case of an “inspired by” cushion foundation as opposed to being a strict cushion foundation in itself.

The first odd thing you may notice when you peel off the seal of the cushion, is how white the cushion is. Unlike most cushion foundations that are pre-soaked with foundation, Bobbi Brown has not done so. Instead, what I was told is that the cushion “floats” on top of the liquid foundation, which is at the bottom of the cushion (are you still counting the number of times I’ve said “cushion”?)

As it isn’t pre-soaked, I do find that it feels a little stiff. What you are supposed to do, is to lightly press on the cushion, which will then prompt the foundation to flow and saturate the cushion (that’s what the hole is for) and transfer to your sponge. What this does, is to allow you to control the foundation – how much product or how little you want it.

The other reason, I was told, is that this way, the cushion foundation does not dry out as quickly as they normally do. Personally, I find that it’s just a little strange, and makes it look messy each time you use it, as the colour will spread and stain the pristine white sponge. It just feels a little weird.

The sponge puff applicator has a slightly rubbery feel like that of a traditional Korean cushion foundation. However, unlike the Iope one, I find that this sponge absorbs the foundation a little too readily, by comparison. 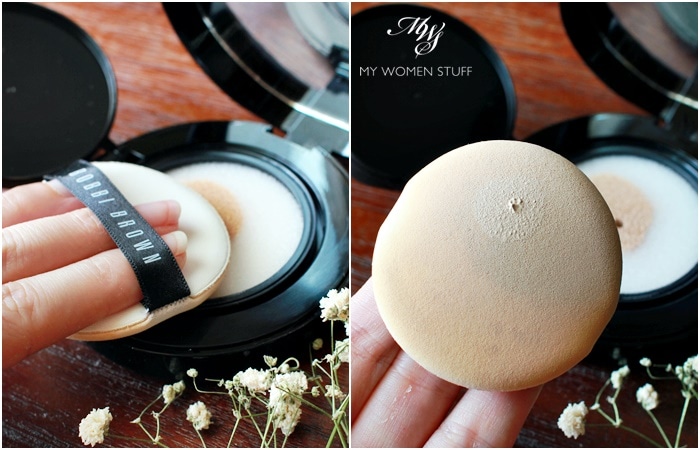 Like all cushion foundations, slip your fingers through the band on the sponge, press it lightly on the surface of the cushion and then, PAT the product on your skin. You may notice how the product that is picked up is a little thicker and creamier in texture. This was just 1 light pat on the cushion.

While I’m a big advocate of using the sponge puff for cushion foundations, the formula of this particular foundation lends itself quite readily to using a brush applicator. This again, pisses off purists, because that’s NOT the point of a cushion foundation! Yet, a brush does work a LOT better in terms of application and ease of use.

I found the texture of this Bobbi Brown Cushion Foundation a little thicker than I expected. It resembles a cream foundation more than a traditional, lightweight Korean style cushion foundation. So, with this thicker texture, I expected better coverage, but was a little disappointed to find that the coverage is light.

While low coverage, it does even out skintone quite naturally, although it doesn’t do very much for pigmentation or blemishes. I can follow up with a concealer if I want to.

When it first goes on skin, I find it a little “wet” in that it gives skin a lot more glow than I prefer (I have normal-dry skin and live in a hot, humid climate) so I am wont to look a little shiny. However, I learned that if I did what I usually do, and apply some powder over, my skin feels very dry and uncomfortable through the day.

It was then that I noticed that while this starts out a little glowy, it settles down on skin to a more natural, semi-matte finish. So, by adding powder, I was only drying out my skin further. Left on its own, it felt more comfortable as the day wore on. Here is an idea of how it looks in a before-after photo using Bobbi Brown Cushion Foundation in Porcelain. 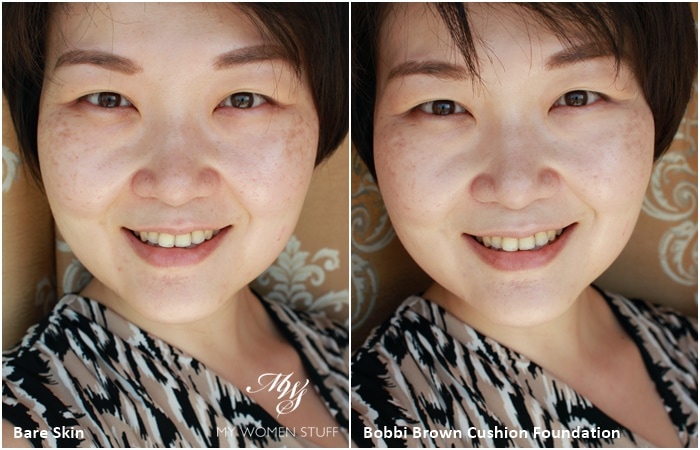 Coverage is low, as I’ve pointed out, but it does even out the skintone somewhat. I find Porcelain a little light. Yet, the next shade up, Extra Light, is a little warm. So what I probably need, is the same shade I wear in the Serum Foundation, Warm Porcelain, a half shade up from Porcelain.

I’ve worn this a few times, and while I will continue wearing it, I’m not in love with it. I find the texture a little too heavy, and feels a little heavier on my skin than I like. I have enjoyed using the other Bobbi Brown foundations, so this puzzles me somewhat. But perhaps a brush makes it feel better 🙂

The shade selection in this range is fairly good, with there being 6 shades released presently to cover the skintone spectrum from light to dark (if you’re tanned or have a deeper skintone, rejoice!). I’m told they expect more shades to be released in future. However, I did find that the shades tend to run a little yellow and warm, so it would be best to test it out in person if you can.

Here are swatches of the shades I have – Porcelain and Light – in the Cushion Foundation swatched alongside other Bobbi Brown foundations so you have an idea. 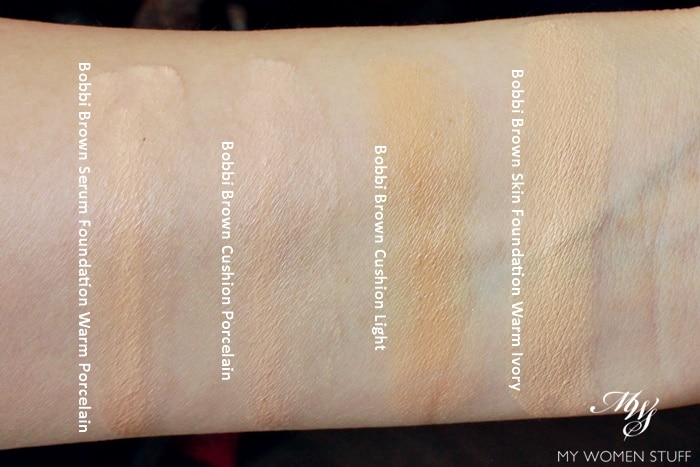 Porcelain is for the very fair, and has a slight pink tone. Light is 2 shades up (there’s an Extra Light in between) which has a significant yellow/warm tone. I do find the shades to be a bit of a problem, so I suggest testing out in person before pulling the trigger. As compared to the other shades I have, Porcelain is closest to Warm Porcelain in the Serum Foundation.

Update: Here are all 6 shades of the Bobbi Brown Cushion Foundation swatched on my arm. 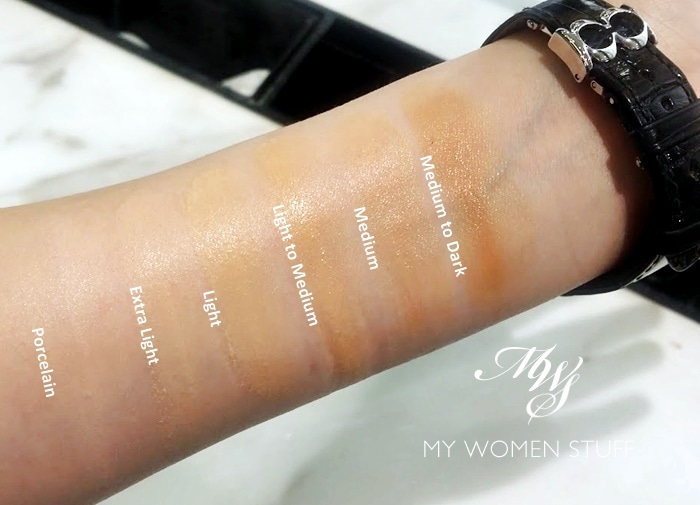 Porcelain as you can see, is best suited for my skin tone. The other shades are varying degrees of warmth, and I do find that Medium and Medium to Dark are a bit orange-based, so I do strongly suggest that you check it out in person and get properly colour matched if you want their cushion foundation. That said, 6 shades is pretty impressive!

Yes, there is a rather strong lavender scent which is similar to that in the Serum Foundation. Not unpleasant, but fairly strong, so I’m sometimes taken aback when I open the compact.

I’m not sure if I like this. I think they put a lot of thought into the cushion, but at the same time, I don’t think the creamier formula used lends itself as well to a cushion foundation. I also find it a little more glowy than I like, albeit a little sheerer than expected as well. I think it works better with a brush, but then, cushion foundations aren’t supposed to be used with brushes and therein lies the conundrum!

The Bobbi Brown Cushion Foundation has a slightly creamer texture and works well with a brush, which rather goes against the grain of cushion foundations! The sponge puff is of decent quality although it does absorb product a little. The cushion for the foundation does not come pre-soaked, which is supposed to keep it moist for longer and to allow us to control the amount of product we use. I again find that a little bit of an anti-thesis to a cushion foundation which is supposed to be quick. The texture goes on skin a little glowy but settles to a semi-matte finish so I recommend wearing it on its own. I don’t think this is a winner, but it’s a decent foundation.

CONS: Pricey, Low coverage, Scented, Texture is a bit creamy and feels a little heavy on my skin, Cushion does not come pre-soaked and may not sit well with everyone, Refill does not come with a cover as that’s attached to the case 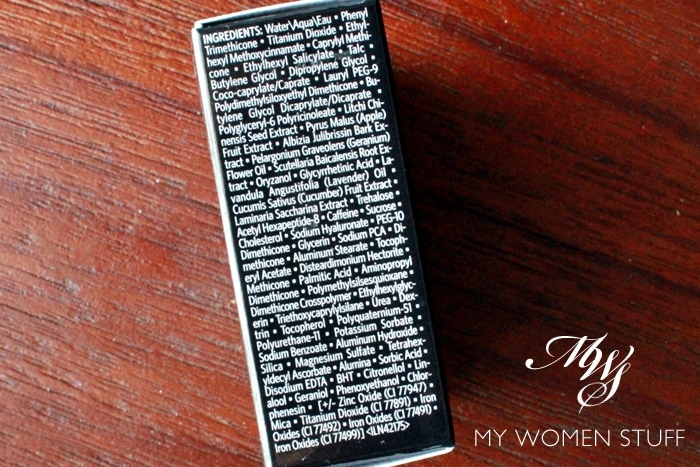 Does this western Cushion Foundation intrigue you? Have you checked it out?

I’d be interested to know what you think if you’ve tried this, or if you are a cushion user and have tested this and how you feel it compares to other cushions you have. I’m not quite sold on this, rather unfortunately. But I suppose that’s just how it is 🙂 Onwards in Cushion Foundation Week!

More cushion foundations can be found in this category.

Disclosure: Featured product was a press sample for consideration. Our commitment is to honesty and fairness. The refill was purchased by me. For review guidelines please read the disclaimer.