Home » Interesting Discussions » Sephora Malaysia is Online : Will you be shopping at the Sephora online store?

If you didn’t already know, Sephora has opened its online store regionally on 1 Feb 2016. This is, I believe in Malaysia, Singapore and Hong Kong for now. The inclusion of Hong Kong surprised me, as Sephora stores had opened, and closed down there many years ago. The Sephora Australia online store launched late last year, to a bit of brou-ha-ha. 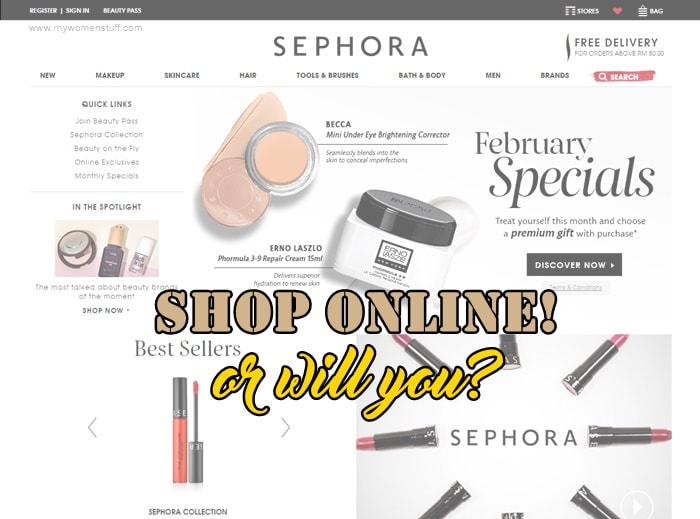 You see, what happened was that some time last year, LVMH (parent company of Sephora) bought over online shopping store, Luxola. Most of you would be familiar with Luxola, I’m sure. They are an online store based in Singapore, but which quickly spread its wings regionally and is quite popular. Luxola offered many brands that were hard to find within the region, with very attractive prices and generous discounts. I’d never purchased from them (personal vendetta) but I know many had, and were loyal to the store, and its discounts.

So, when I first learned of LVMH’s acquisition of Luxola, I had an inkling of what was to come. I therefore, wasn’t too surprised when Sephora announced that they were going to have online stores locally. It did make me wonder if, knowing what I know, whether I’d shop at Sephora online. After all, I already do a lot of online shopping.

While there was a lot of speculation about how the Luxola-Sephora transition would happen, it all became quite clear on 1 February, when the Sephora online stores went live. There was an email sent out to Luxola customers informing them of the switch over, and offering some form of discounts and conversion of points (I’m a little hazy on details, so if you have shopped on the site before, you will have gotten your email and be clearer about things)

However, when I checked out the Sephora online store out of curiousity, I was rather surprised to see that it was pretty much a rebranded Luxola site.

There were some new brands included, which are carried by Sephora locally e.g. Nudestix, Tarte and Marc Jacobs Beauty, but in the main, the brands carried by Luxola were still present. This should technically please most people, except it didn’t.

Many brands sold at Sephora stores aren’t available online e.g. NYX, Clinique, Estee Lauder, Dior, Caudalie, Too Faced, Shiseido, Guerlain etc. The online store is essentially a Luxola store with Sephora branding. Brands sold on Luxola aren’t available in Sephora stores. It was a bit of a strange mash-up, if I’m to be honest. I can buy Alpha-H on the Sephora online store, but I can’t buy it in the physical store. I can shop Guerlain and the magical Meteorites in store, but not online. It boggles my mind and begs the question why the lack of standardization of brands available.

Perhaps it’ll iron itself out, perhaps it won’t, but I know it didn’t sit well with those who were hoping for a proper online store with a proper representation of products sold at Sephora stores. 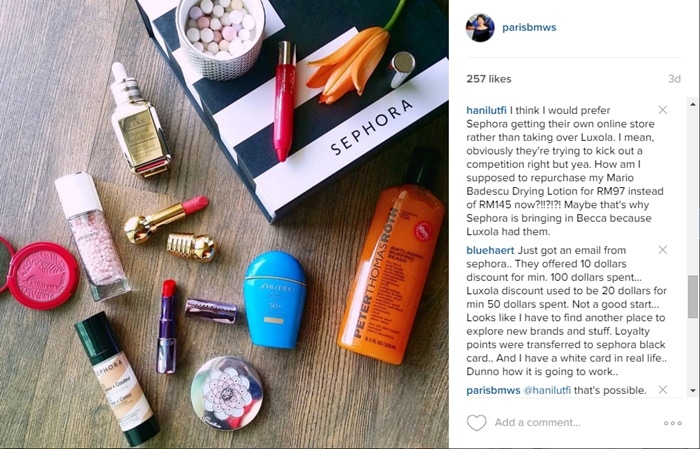 Also, with the change of ownership and rebanding came a price – literally. Prices of items literally shot up and through the roof! I had readers complain on my Instagram post, about prices of items they regularly buy on Luxola suddenly becoming much more expensive than they used to be. Zoeva brushes in particular, were suddenly very pricey in comparison to what they were before.

I also had people on Facebook tell me that they had such bad service with Luxola’s delivery service that they would rather just buy from the Sephora store now, since they’re one, rather than from the online store. Also, Luxola had an infamous problem with products being out of stock all the time, and it appears to still be the case.

So logistically, it will take a few days (Sephora says 2-10 working days) for an item bought on the local Sephora website to reach your doorstep, as opposed to instant gratification buying the same item in store. Prices are the same after all. Not only that, there isn’t even next day delivery offered, which I might expect, if I did not know that the products will be shipped from Singapore. Malaysia isn’t very large – it is actually possible to send things overnight within the country – I’ve done it with the most basic of service, Poslaju.

So, with no extra benefits shopping at the Sephora store online as opposed to shopping in store, except for brands available only online (which brings me to my first point) I suppose the primary reason anyone would use the online store, would be if there was no Sephora store in your town. That is, if you didn’t mind that the online store was not really representative of what you could get at an actual Sephora store.

So that’s where I am at this time. I love shopping online, and I do so often. But because I had bad blood with the previous owners, I’m not likely to take my custom to this new Luxola-Sephora hybrid online store. That’s my personal beef. Does it make me a little biased? Yeah, I’m sure it does but hey, what does Sephora care? My business is but a drop in the figurative ocean!

Further, if it’s true that the prices were adjusted significantly to match in store prices or raise the prices (which I expected, as Luxola was very competitively priced before) then that would be another reason I wouldn’t shop there – ease of access to Sephora stores and alternatives. There are so many Sephora stores in town, you’re never too far away from one if you REALLY need something. And you don’t have to wait days or weeks for your purchase to arrive. As for other brands, I could just get them online elsewhere.

On the other hand, I can see how this might be exciting to those who do not have access to a physical store, or if you are in Hong Kong or other parts of Australia, where there is no store anyway. Something is better than nothing!

Where are you on this? Are you likely to be shopping at the new Sephora online stores or are you smarting over the switch?

I’d probably be blacklisted by Sephora over this, but heck. It’s not like they were terribly friendly with me to start! LOL! So, while I will still pop by the physical Sephora stores, I’ll be giving the online store a wide berth and take my online custom elsewhere. If I’m going to wait for days or weeks for a purchase to arrive, I might as well buy something that comes from further away! 😛 What about you?

PREVIOUS POST: Your Say: Is blogging dead?
NEXT POST: With the Fountain Hyaluronic Molecule you can now drink your way to hydrated skin

54 comments ... Read or JOIN THE DISCUSSION