Regulars to MWS will know just what a huge huge fan of the Guerlain Meteorites powders I am. I’ve been extolling their beauty and benefits since I started blogging, and since before they were a “thing”, and the Météorites Perles a.k.a Guerlain Balls, are the only makeup I actively collect. I mean, I use them, but I also collect them – the newer incarnations anyway. 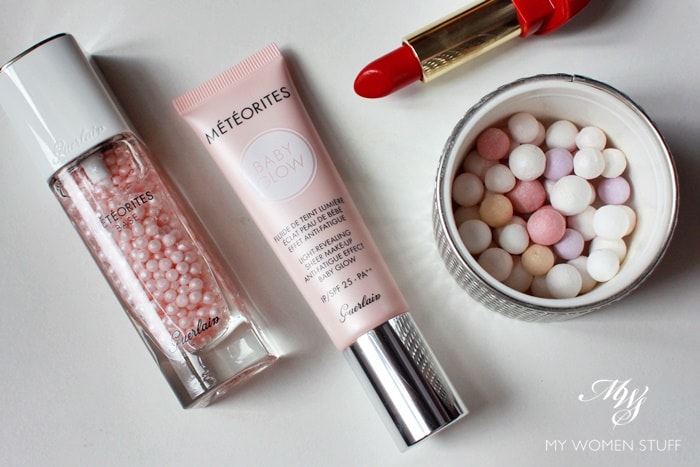 I didn’t buy it when it first launched last year. For some reason, the reviews that came out back then weren’t very favourable. Many people complained of it being too sheer for a foundation, and many panned it as a result. However, some time towards the end of 2015, I decided to give it a go. For some reason, it was one of those things I just HAD to try, despite the bad press.

I’m a self-proclaimed fan of most Guerlain foundations, and I even call their BB Beauty Booster a firm favourite, placing it on a pedestal, because I love it so much. I figured that if I enjoy their base products so much, I should give this a chance.

The question of course, is whether I regret giving it a go?

Perish the thought! I’m in freaking love with this Meteorites Baby Glow foundation! 😀 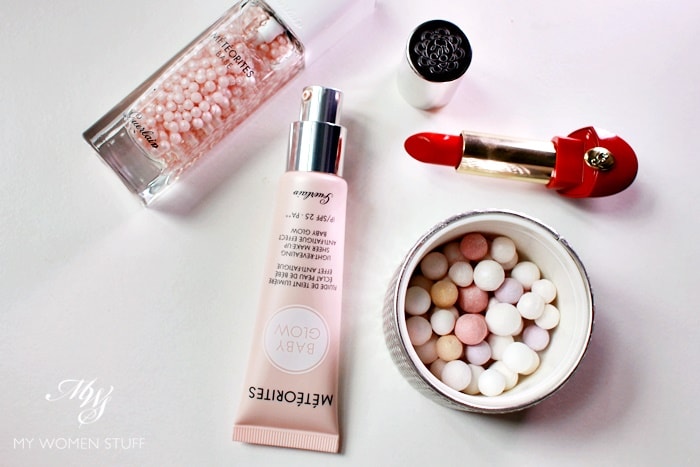 The critics are right. The Météorites Baby Glow foundation is fairly sheer, for a foundation. If this had swapped labels with the BB Beauty Booster, which is more foundation than BB cream, I think it would be more accurately labelled.

However, what the Météorites Baby Glow foundation purports to do, as they have clearly pointed out, is to give skin a glow and lift tired complexions with just a sheer tint of colour. It’s all there on the tube, folks! And if I’m to be fair, I do not think this very sheer at all. I’ve come across worse.

The product comes in a tube, with a pump, and is rather small in size, but houses a respectable 30ml of product, just like most foundation sizes. I kind of like this, because it makes the product very portable, and you can easily tuck this into your travel pouch, or daily makeup kit without it weighing you down, or without fear of it breaking and spilling.

It only comes in 3 shades – 02 Clair/Light, 03 Medium, 04 Dore – which is rather limited, but because of the sheer texture, it may work with in-between skintones. However, as with most Guerlain colour bases, this Baby Glow foundation tends to a slightly more pink tone. While it might be this pink tint that helps to give tired skin a lift (most pink toned bases do) it might also mean that it may turn out looking ashy on warmer skintones. It’s a bit of a gamble, and I know that’s a common problem with all Guerlain foundations, not just this one. 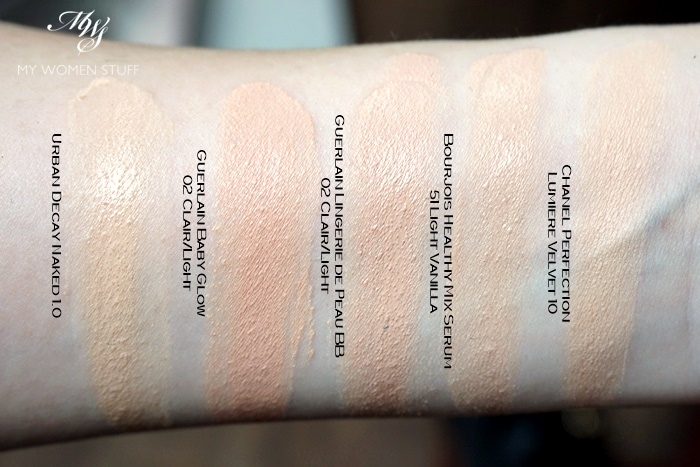 This is a comparison of the Baby Glow foundation to other foundations I also use, in the shades that suit my skintone. You may notice how the 2 Guerlain bases are more significantly pink compared to other popular foundations. You may also notice from the swatch, that the Baby Glow isn’t all THAT sheer as I’d been led to believe before.

I’d consider this a foundation with light to medium coverage, which you can build up where you need. For me, I use just 1 pump of product each time, which I then spread out using this fool-proof foundation method, and I like blending out with a foundation brush. Then, I use the brush to pick up remaining product and dab it over areas where I need it most, to even out skintone and cover redness.

You may be able to tell from the before-after collage below, just how well (or not) it works for me. 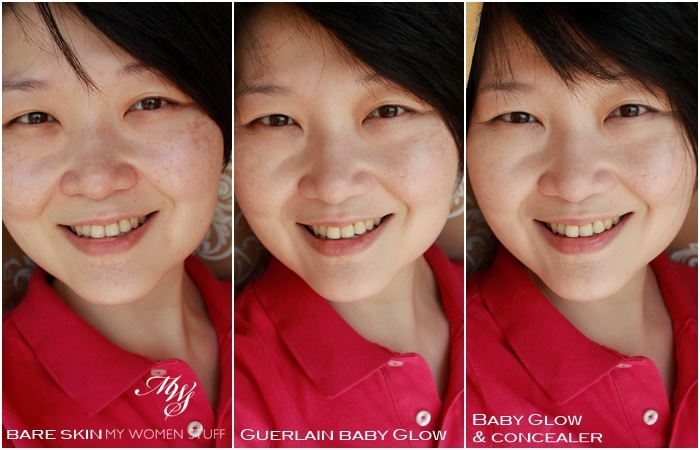 With just the Baby Glow foundation, you may notice how most redness and uneven skintone is evened out. Skin almost immediately looks more radiant, with a glow that I can only attribute to the magic of Météorites , and I already look less tired! I usually apply base on my under-eye area as well, and you can see how my complexion is lifted.

When I want to look a little more polished, I dab on some concealer where I need it (under-eye, pigmentation on cheeks), blend it out and then apply some powder to set, which results in picture #3. Once I set it, I’m good for practically the whole day, and it doesn’t dry out my skin either. If I don’t, it will slide off eventually. That’s fine by me.

That said, I do not have oily skin so I don’t know how it fares for those who do. However, I have worn this for most of the day, then had a 40 minute session on the treadmill, and then cleaned house. It faded, naturally, but still looked pretty decent, so I was quite impressed. (No, I do not regularly wear makeup to the gym nor to do housework 😛 ) 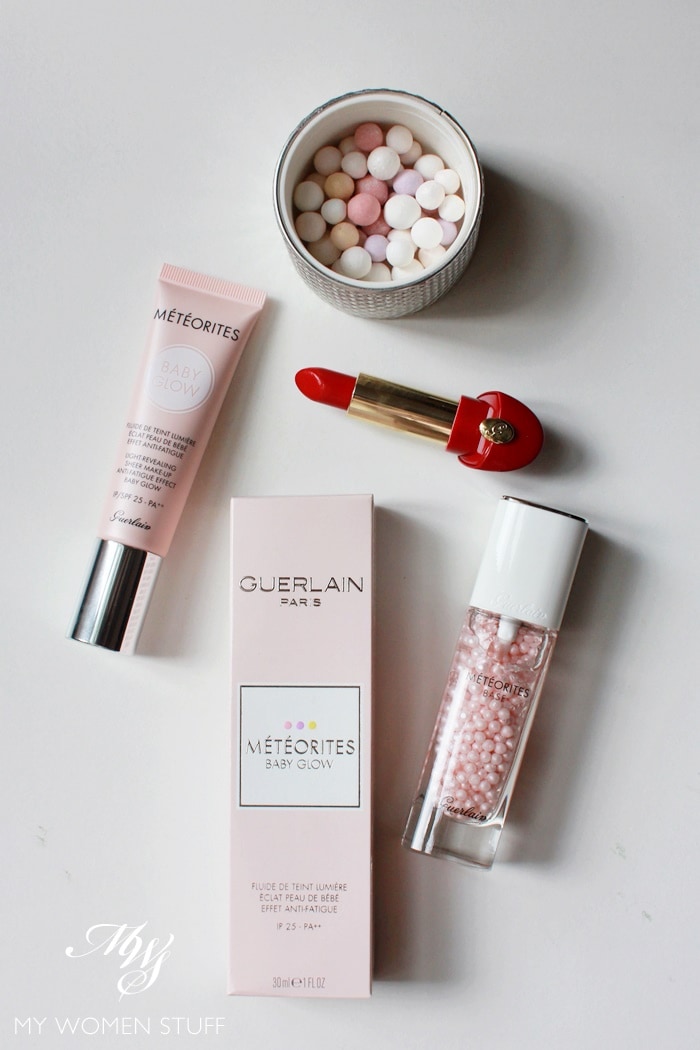 For me, someone who prefers a light-medium coverage product, this is wonderful. I can use as much or as little as I like, and sometimes, I apply Meteorites powder all over, which then makes me look pretty flawless. I didn’t expect to like this as much as I have, but I do! 😀

The Guerlain Météorites Baby Glow foundation is a light textured liquid foundation with a light-medium coverage on skin. It only comes in 3 shades – 02 Light, 03 Medium and 04 Dore. I find that the product is light on skin and easily blends. However, some may find that coverage isn’t up to par. For me, I like that it evens out skintone and redness very nicely, while leaving skin looking imperceptibly and impressively glowy, while lifting the complexion. They aren’t kidding about it having an anti-fatigue effect. It does! Once I set it with powder, I’m usually good for most of the day. You can also up the glow factor, by apply Meteorites powder all over, which I sometimes do as well. For me, I love this one. The downside would be the sheerness and the tint, which leans more pink the way all Guerlain bases do, and the price. Otherwise, it’s a beautiful foundation.

PROS: Lightweight texture, Easy to blend, Gives skin a flattering glow and lifts tired complexions, Can be built up by dabbing on with a foundation brush or sponge

CONS: Pricey, Shade may not suit warmer skintones, Some may find it too sheer

WHO WILL LIKE THIS: Anyone who likes light-medium coverage foundation, Anyone who has a more pink toned skintone 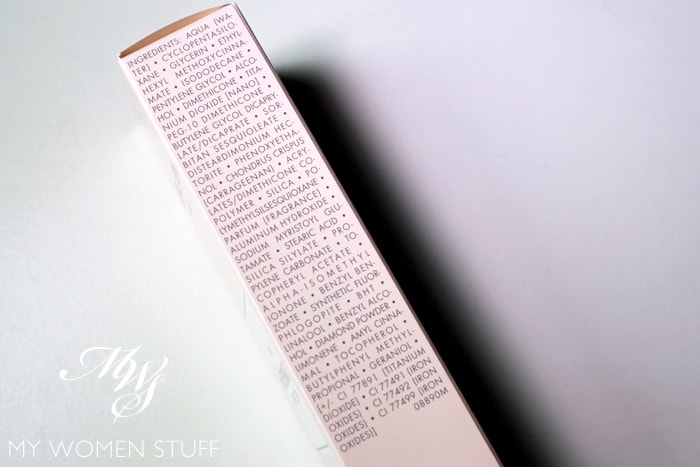 I will note that there is also that signature scent that Guerlain infuses all their makeup with, which some say is the scent of violets, and I could personally do without. But it doesn’t bug me very much, so I’ll live! 😀

I’m glad I took a chance on this, despite the mixed reviews out there. Personally I think it’s a good one. Light enough not to be a mask, yet does everything a foundation should – lift the complexion, give skin a glow, even out skintone, and make you feel (and look) human enough to face the rest of the world 😀 Now, who doesn’t want that eh? 😀

PREVIOUS POST: Chanel Sunkiss Ribbon Blush Harmony is a blush soothing to the eyes and glowy on the cheeks
NEXT POST: Your Say: Do your friends share your fascination or love for beauty or makeup?

Tried out a local brand @theraw.skin and dug first

Be kind to your wallet and your skin 😅 my favou

Revisiting yet another new iteration of a classic