I haven’t dwelt on my favourite subject matter for a while – bags! Actually I haven’t dwelt on the subject much since I stopped blogging on weekends. With so few blogging days a week, I found it hard to squeeze in everything I wanted, yet I was loathe to break the rhythm heh…

But hey, what’s life if not full of variety and lately, I’ve found my thoughts drifting rather dangerously to that of the adorable Hermes Picotin. 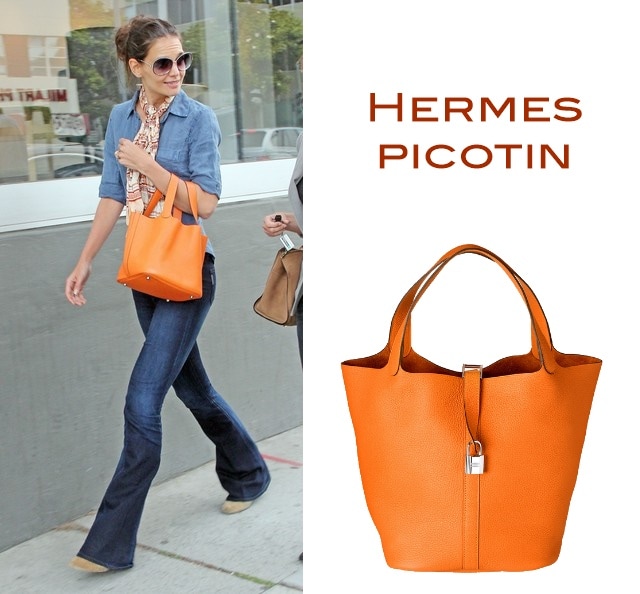 Well, I say dangerously, because we all know what it means when the H-brand is mentioned right? Nope, pricey doesn’t quite begin to describe it 😀 But try ‘luxury’ as well 🙂

The Picotin comes in a few sizes, and its unstructured, rather casual design is inspired by the feed bags for horses. It’s shaped like a bucket and the smaller sizes are handheld totes. The larger versions can be slung on the shoulder.

It’s understated, quiet and yet looks casually chic and that must be the reason I’ve found myself drawn to it, time and time again.

I’ve actually checked it out in store a few times. It’s quite common to find one in most Hermes stores, and it comes in quite a few colours. The only reason I haven’t yet bitten the bullet is because I kept holding out for Etoupe (a brown-grey taupe shade) leather, a shade I’ve been eyeing for a while. 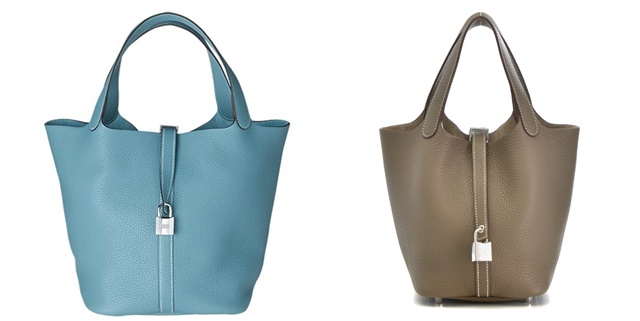 That’s Etoupe on the right and I’ve actually played around with the blue one in store a year or two back, but didn’t bite the bullet, because I wasn’t drawn to the shade. I’m not one for pastel colours in anything.

The interior is pretty roomy although it’s just one large compartment, and it’s got a raw leather hide lining on the inside, and closes with a tab, with a signature lock attached to it. My misgivings of course are with the rather open design and the size.

While I now don’t carry as much in my bags as I used to before (it really destroys your back when you do!) I don’t know if I can scale down enough. I’m contemplating the MM because the PM looks way too tiny! But I haven’t actually seen the MM in store here. It is also a fairly casual design so that again, is something I’m a bit iffy about.

Ah, but you know, with the economy being what it is right now, perhaps it’s just as well I’m just lusting over it from a safe distance 😀 It would only get hairy if I walk into the store one day and am told that there’s a Picotin PM/MM in Etoupe available. Then, the question would be whether to suck it up and sell my soul … or maybe a kidney 😀

Do you by any chance own the Picotin and can share your experience with it?

I love how cute it looks, yet I’m torn about the open design and size. I know it may not be an immediate purchase, but hey, a girl can dream right? 🙂