Home » Fragrance » These modern times, Estee Lauder encourages you to be bold, confident and a Chic Modern Muse

Don’t be ordinary – that’s what the new Estee Lauder Modern Muse Chic fragrance encourages you. Be yourself, be your version of chic.

But you know, it’s getting harder and harder to stand out from the hipster crowd these days, don’t you think? Everyone is trying so hard to be different, we all end up being the same or similar in the end. Uniformly different, is how I’d describe it. 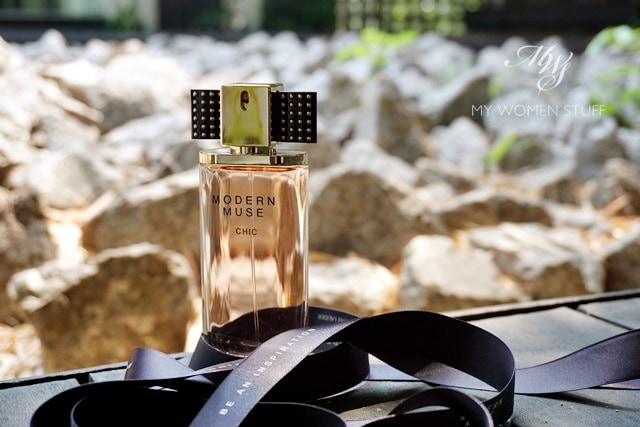 And in a manner of speaking, I feel that way about the new Modern Muse Chic fragrance from Estee Lauder. It’s different. If you’re used to the sweet, fairly generic floral scents that are found in Estee Lauder, Modern Muse Chic grates a little on the senses, with its slightly woody, musky basenote.

But you know what? I like it! I didn’t take to Modern Muse. I wasn’t inspired by it and it didn’t appeal to me at all. But I gravitate towards warmer, woodier, muskier scents and this one fits that bill despite being a distinct floral.

Which is why I say that it’s a bit of a “uniformly different” product, because there is all the florals, but with a deeper, edgier twist that you will either enjoy, or run off to the bathroom to scrub off your skin.

I personally enjoy it, and the first spritz on my skin told me I would. It starts off with a burst of florals – my untrained nose smells a lot of lilies blended with a musky rose –  that then dries down to a warmer, more woody and spicy floral base. If you enjoy light florals, or sparkly florals or just sweet, fruity floral scents in general, then I think Modern Muse Chic won’t be for you. 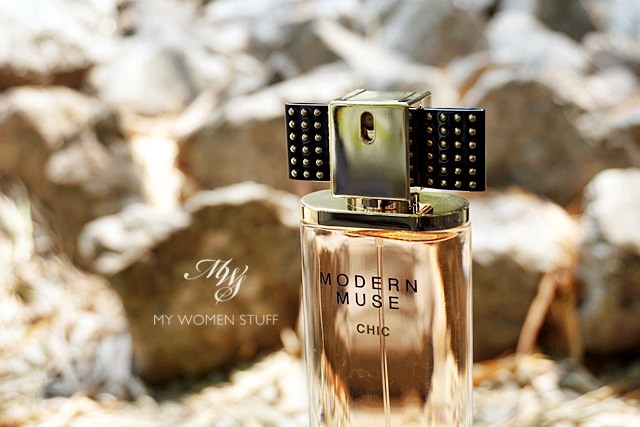 This is decidedly a modern scent, but not necessarily chic. I don’t know what “chic” smells like but I wouldn’t imagine it to smell like this. That said, if you wear this, and it works with your skin then you might just feel chic. It’s your version of chic after all! 🙂

But why I say that this is a “uniformly different” scent is because for the most part, it’s a normal department store fragrance. It isn’t terribly unique, nor would I consider it a niche scent. Spritzed into the air, I receive a sharp burst of flowers, before detecting any other notes. The sweet floral notes are familiar.

On my skin, the sparkly floral notes dissipate quite quickly, for which I’m thankful, and it dries down to something warmer and more well rounded. It still smells familiar. Like a warm blanket of florals. But after a few minutes, the warmer woody base notes start to come up to temper the sweet floral scent that I shy away from, and that comforts me and makes Modern Muse Chic wearable for me. 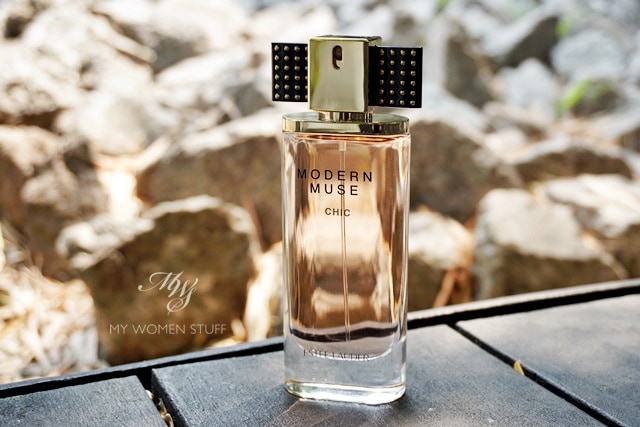 And that’s what makes it different to me. For someone who appreciates warmer scents, this one appeals to my senses, despite the generic florals. It isn’t the most unique scent you can find, truth be told. I wear this when I don’t feel like standing out, or being different. It’s something I wear without consciously thinking, when I feel like blending in.

The lilies however, can overwhelm some noses and the musk will turn others off. For some, they might just find this too much of a “department store fragrance” and therefore not unique enough.

For many, this is likely a scent you’d wear in cooler temperatures or in the evenings. It can feel too heavy on a hot day, so this isn’t likely to be your first choice for a summer perfume. But when the cooler weather comes around, you might find it more pleasant then. If you want something uniformly different, that is 😉

A note about the bottle. While reminiscent of one of Estee Lauder’s earlier perfumes, Youth Dew, I’m not feeling that studded bow. While studs are quite in, to give off a chic-but-edgy-rockstar vibe (think Valentino), I feel that it can potentially date the packaging which will result in it not being very modern in the future. Besides, I don’t really associate being chic with wearing studs; but who am I to say since I’m no fashion maven! 😀

Have you taken a sniff at Modern Muse Chic? Have you used any Estee Lauder fragrances before this?

I used to be a fan of EL fragrances. No idea why! I went through bottles of Beautiful (which on hindsight, was really far too strong for daily wear, but it became my signature scent) and then I enjoyed Dazzling Gold. The others didn’t appeal to me. Pleasures in particular, is a popular young girl favourite, but it absolutely turned me off! Interesting how scents can work differently on different people eh? 🙂

Disclosure: Featured product was a press gift for consideration. Our commitment is to honesty and fairness. For posting guidelines please read the disclaimer.

PREVIOUS POST: Excuse me, your age is showing! 8 Physical signs of aging and how you can combat them to look younger
NEXT POST: I’m no makeup artist, but these Make Up For Ever Artist Shadows almost make me feel like one!