I had a strange experience recently, where for some reason, every foundation I put on my skin looked off. It so happened that I was trying out a new foundation, and I was quite ready to pan it. My makeup looked splotchy and wore off quickly through the day and although I have normal-dry skin, I was actually having to blot as the day wore on.

For someone who doesn’t own oil blotters, it was quite a mind-boggling experience. 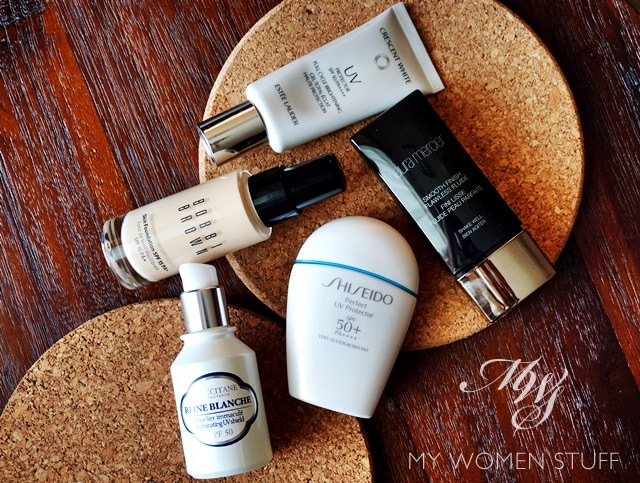 But after my initial outburst, a cooler head prevailed and I tried to figure out what was wrong. For the record, the 2 foundations in the picture above – Laura Mercier Smooth Finish Flawless Fluide and Bobbi Brown Skin Foundation are 2 of my newer favourite foundations. I’ll be expanding my Top 8 foundation list soon to include a few more I’ve been using over the last 6 months 🙂

After careful thought, I hit on the problem. It wasn’t the fault of my foundation. The problem went deeper than that!

The problem was with my sunscreen.

I wear sunscreen daily and in the past 2 years, I’ve only ever used one – Shiseido Perfect UV Protector SPF50+. I preach about its virtues to anyone who’d listen, it’s the only one I’d comfortably recommend and I have gone through multiple bottles of it (out of my own pocket, and if you know how much it costs, that’s a lot of money I’m dumping into sunscreen that I run through like water. But whatever works!)

Part of the reason I love the Shiseido Perfect UV so much is because aside from it protecting my skin (and I swear it does it impressively even by the beach!) it makes a wonderful makeup base/primer. People often ask me whether I use a makeup primer and my answer is always no. I don’t like using more products than necessary so I use my foundation directly over sunscreen, which forms the last step of my makeup. That my sunscreen also forms my primer never quite crossed my mind.

And in the past 2 years I’ve had absolutely no problems. Foundations that I like stay on nicely, and foundations I dislike don’t. But then, I was recently given the opportunity to try a couple of new sunscreens. I haven’t used a new sunscreen in over 2 years, and I’d just squeezed out the last drop of my Shiseido sunscreen. I thought I’d give it a go.

Unfortunately however, that’s when I noticed the problem with my foundations. The new sunscreens had a different, creamier texture and had a tendency to oil up as the day wears on. I’ll review them separately in a separate post, and I’m not saying they’re bad products, but they played merry hell with my foundation and confounded me for 2 weeks while I laid every blame I could on my skin and foundations (poor maligned skin and products!).

When I broke down, bought a new bottle of Shiseido Perfect UV and used it, the balance in my universe was restored. I achieved foundation nirvana again.

I also knew then, that whenever a foundation doesn’t seem to work on our skins, sometimes, it’s not the fault of the product. It could be because of what we’re wearing underneath. Perhaps it’s your sunscreen where the texture doesn’t mesh well with your foundation. Sometimes, it could be your skincare – a day cream may be too emollient, and because it’s hot in the tropics, you may oil up more quickly than you expect, which may mess up your perfect base.

So my tip here is, before you pan a makeup product, consider if you’ve changed something in your skincare routine. In my case, it was my sunscreen that messed things up and frustrated me for 2 weeks. I’m using the same foundations now over my regular sunscreen with no issues at all so I know it’s not the fault of the foundations.

Have you experienced something similar? Have you dumped a poorly performing makeup product or foundation without considering if it might be your skincare that’s incompatible?

I admit that this is the first time I’d thought about how my skincare plays with my makeup. I usually just slap things on and assume they’d work. This time, I realised I might have to think about it a little more. Sometimes, it may not be the fault of the product, it could just be what we use for our skincare that results in different people having different experiences with the same makeup product 🙂

PREVIOUS POST: You don’t have to be mad or a hippie to try this Mad Hippie Vitamin A Serum – It works!
NEXT POST: The Dramatic Melting Rouge that completes your glowing Maquillage