Summer! For the most part, that’s what we are experiencing right now in most parts of the populated world, with varying degrees of heat and humidity. Summer usually brings to mind corals, bronzes, warmth and the sun. So when I first saw the NARS Adult Swim Summer 2014 collection, my brow furrowed. 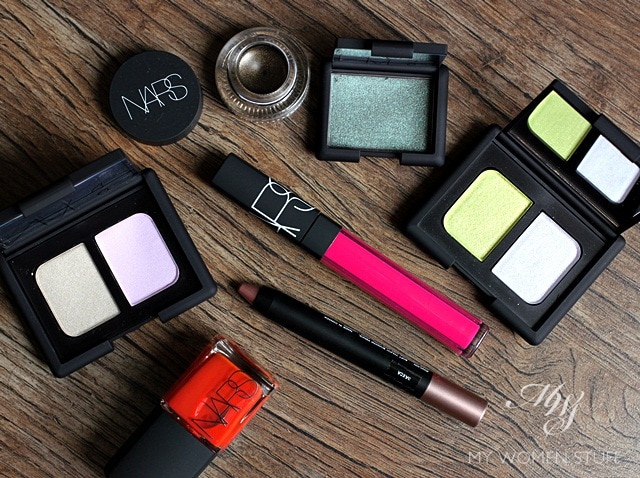 Ok, so the bright lip and nail shades do scream summer, but the eyeshadow duos? You couldn’t get further from warm summer colours if you tried! I’d even peg them for conventional Spring shades. Ah Francois Nars, you have stumped us once again! 😀

I don’t have the time to break down the colours and products at the moment in great detail, but I thought I’d better get this out there before they’re all sold out. Some items are limited edition, which I’ll identify, and some aren’t (whew!) so I’ll revisit the permanent items later, and just get things out of the way for now. So, head on for a picture and swatch fest 😛 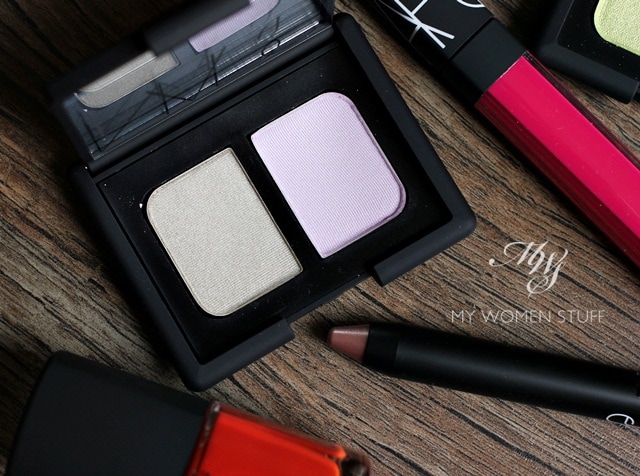 Lost Coast eyeshadow duo is described as a Golden Pewter and Lilac Snow and in the stock photos, look quite deep. In reality, it looks like what you see in the picture above – very light and very pale. I cannot say that this will appeal to many people for the simple reason that it barely shows up on skin.

It does perform best worn over a base, and you can wear both colours separately as highlight shades. However, if you do wear them together on your lids, I must admit that it illuminates the eyes and gives it a very natural luminance. It did appeal to me especially if you line and wear mascara, for a very simple, very clean look, although you will have to layer on the colour and pack it on with a dense brush like the MAC 239. I could see myself wearing this, on very lazy days, or very hot days with just liner for definition. But, it will not appeal to everyone. 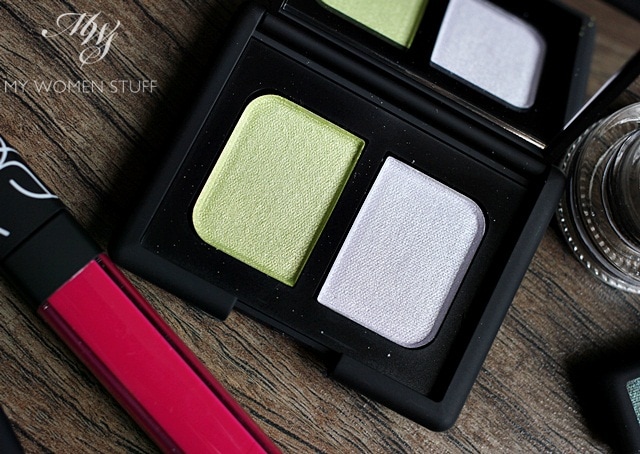 Tropical Princess Eyeshadow Duo is brighter with more shimmer in it. It also swatches more pigmented so you get colour that’s quite true to what you see in the pan, described as Neon Lemon Lime and Icy Lavender. It too may not appeal to everyone, especially because of the metallic shine both shadows have. The bright lime green isn’t as neon as the label implies, if I’m to be honest. I prefer wearing it paired with a deeper shade like a deep brown or black shadow. Otherwise, paired with the Icy Lavender, I feel it to be a bit too out there, unless you are young and fancy free and are able to get away with it. To ground these shades, be sure to apply a dark eyeliner and lashings of mascara 🙂 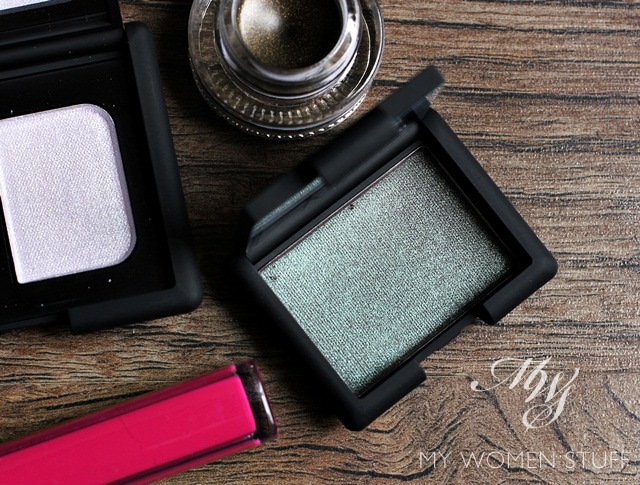 Thankfully, Malacca Eyeshadow Single is a permanent shade and it’s utterly gorgeous! I want to focus on this one at a later time so I’ll go into the story then, but for now, know that this beautiful blackened green in pan goes on skin a browned shade with green undertones that is very flattering to most skintones. I’ve seen this one worn by many people and it looks amazing on it’s own, or as a shading colour. The quality is smooth and pigmented and the shimmer isn’t over the top. It’s impressive and for Malaysians, you gotta have this one 😀 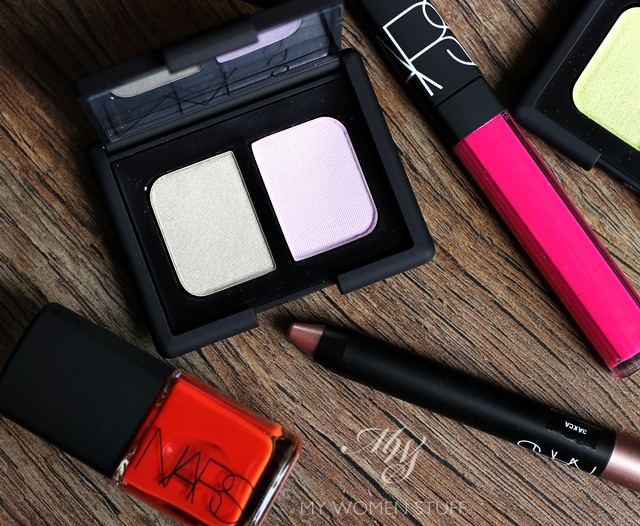 Priscilla Lip Gloss is a bright neon pink lip gloss that I was taken in by yet repelled at the same time. Look at it! I kid you not, it is truly that bright and that pink! It looks like a highlighter in lip gloss LOL! 😀

But you know, I was pleasantly surprised at how pretty it looked once applied. I’m quite brave when it comes to lip colours and it pleased me that there was enough blue tones in Priscilla so it didn’t make me look sallow nor make my teeth look too yellow. It was surprisingly opaque, not sticky, not tacky and had no scent! I’ve never used a NARS lipgloss before this, but this one was impressive.

A bronzed rose shade that looks surprisingly pretty on skin and very wearable. Unfortunately, staying power was pretty poor on me, which is surprising, considering I don’t have oily lids. So I use this along the lower lash line to brighten the area without making it look too smokey and it works. Just. If there was one to miss in this collection, skip this one. I’d rather spend the money on Laura Mercier or Bobbi Brown stick crayons. Trust me on this one.

A bright opaque orange nail polish which looks as bright on nails as it does in the bottle. I don’t wear polish but this would be one that will look pretty on toes as you wriggle them in the sand by the beach. Not going to the beach? Channel it anyway with this bright sunshiney orange hue on tips 😀 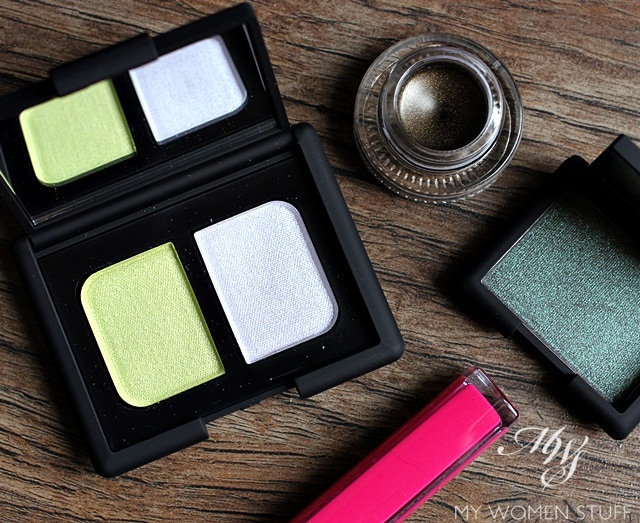 Baalbek Eye Paint is a beautiful bronzed gold that you can use as an eyeliner, or wear it as a cream eyeshadow. Being an addition to the permanent Eye Paint range, I’ll do a separate focus on it later once I’ve played around with it a little more. It is gorgeous in the pot and from what I’ve seen, gorgeous to wear too as a hint of a smokey eye, or as a base for you to apply Lost Coast over, or even to blend with Malacca for a smokey eye look 😀

Here are the swatches of the items above for your reference. 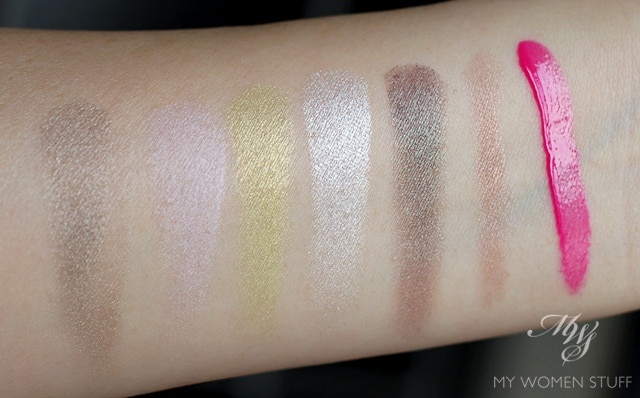 From left to right:-

Just for a reference on how I’d wear items from this collection, here’s a very quick look I put together. 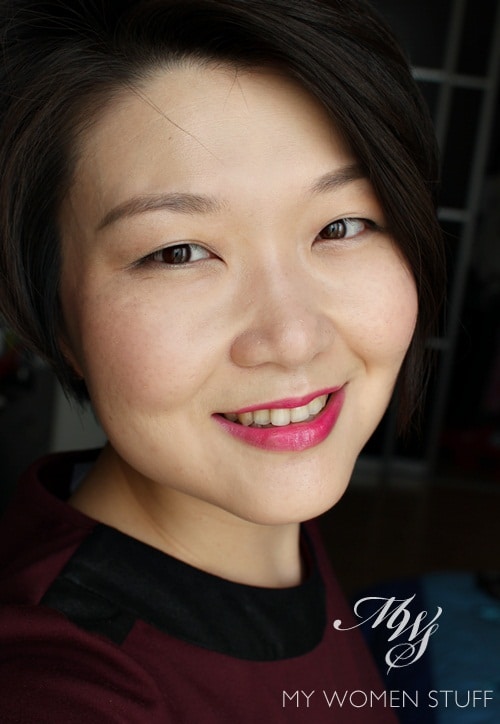 I’m wearing Lost Coast eyeshadow which you can barely see, I know. No need to tell me LOL! But if you peer, you may notice a bit of light lilac about the lid area. I also have on eyeliner (I used the Marc Jacobs Magic Marc’er) and mascara. In real life, it just looks polished, without looking like I have a lot of product on around my eyes. Depending on how you like things, it will or will not appeal to you.

I’m also wearing Sex Fantasy blush on cheeks and Priscilla Lip Gloss to balance off the very neutral eyes. I love that bright pop of colour on the lips. Definitely screams SUMMER! 😀

Did you pick up anything from the NARS Summer 2014 collection? If you haven’t, does anything appeal to you?

Personally, I’d pick Priscilla Lip Gloss, Baalbek Eye Paint and Malacca Eyeshadow Single. Ooh did you realise I picked you all the permanent items? Go me! 😀 What would you pick, or what did you pick?

NARS Adult Swim Summer Collection 2014 is available at the NARS store at Pavilion KL. Prices are as set out above

Disclosure: Featured products were press samples for consideration. Our commitment is to honesty and fairness. For posting guidelines please read the disclaimer.

PREVIOUS POST: Marc Jacobs Magic Marc’er : The Precision Pen Waterpoof Eyeliner that is a kind of magic!
NEXT POST: Highlights of Instagram Vol. 9: Saying Hi after the disappearing act