I don’t think there’s anything in the world that conjures up the images of Hollywood in its heyday more than strong red lipstick and a neutral, defined eye. There was a reason why this was so. Old movies and photographs were taken in black and white, and colour photography wasn’t as high definition then as it is now, so and strong, bold colours show off contrasts better. Then again, maybe people valued elegance and glamour more back in the day.

There was a charm about old Hollywood that I think has been much eroded in modern times. Movie stars seemed more like stars – glittery, golden, glamorous, elegant, untouchable. I think this is what Bobbi Brown envisaged in the Old Hollywood collection released for Christmas 2013. 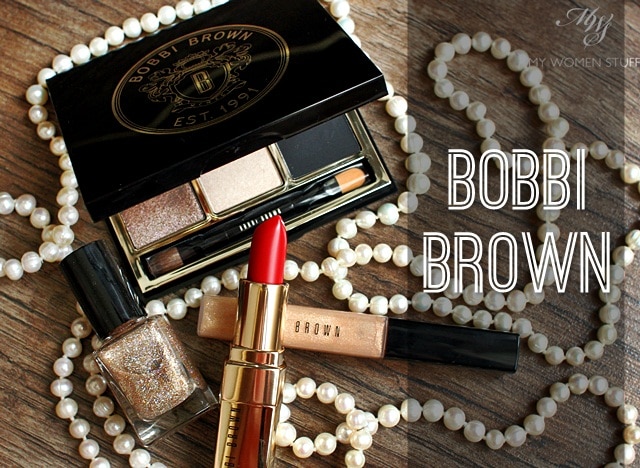 These are some of the items in the collection and I think you can already see how it all ties in with the festive season. The touches of elegant red on lips, the golden glitter infusing the eyes, nails and lips and an easy elegance in the sleek lines of the packaging.

Performance of products aside, this is quite a visual feast for the eyes and fitting to its theme. You may already have seen this around or even picked up an item or two from the collection so let me know what you think of it while I run it down quickly for you. Get a coffee, we have lots to get through 🙂

The Old Hollywood Eye Palette (RM290) is quite easily the star of the collection, with it’s eye catching grid of 9 neutral toned eye colours in a slim, handy palette. This is one of those palettes that will catch the eye of those who love wearing neutral eyeshadow. Up to 5 years ago, I’d have given this a cursory glance and headed for a palette with brighter, more tropical colours. But in this past 5 years, I’ve grown fond of neutral tones so this did catch my eye. 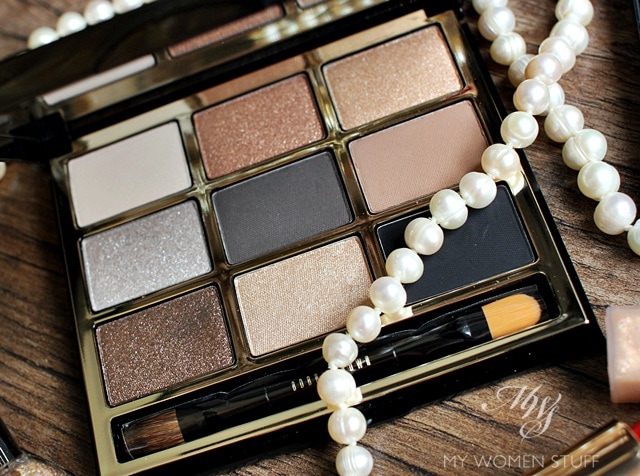 I actually think this to be quite a balanced neutral palette in that the tones are quite equally cool and warm. So, someone with a cooler skintone like me will be able to wear these colours without them looking muddy on the eye area, as will someone with warmer skintone. It won’t look ashy.

However, I will have to tell you also that not everyone will like this palette. The reason is because for the most part, people will find the colour pay off to be a little poor in most of the colours. It’s not unwearable, but it will take a little more work to pull off and with the many options out there *coughNaked2cough* this does fall a little short.

I’m quite used to working with sheerer colours for eyeshadow as that’s what I do gravitate towards, so I didn’t think too much of it. For the matte colours, you will need to layer for them to show up well. For the shimmer colours, barring one or two, most of them are mostly for highlighting. Use a good eye brush (not the one included please) and you’ll appreciate it better. But use fingers and you’ll just wrinkle your nose.

These swatches of the Old Hollywood Eye Palette should give you an idea of the colours and texture. I’ve swatched them from left to right, top row to bottom and I’ll label and describe them below.

All in all, I can’t say this palette is a must have, because I do think many people will be disappointed with the dry and sheer texture especially of the matte shadows. You can work with them of course, but you will need a good dense brush and patience. Also, it will depend on the sort of eye makeup that you do. I usually only do makeup for work and this does fit my lifestyle because it isn’t too intense and I can wear a colour like Candlelight Gold but lower the intensity by using a matte shade to blend it out, and a dark shade to add some shadow. Nothing too intense. But if you love your shadows strong, bold and pigmented, don’t get this one. You’ll be disappointed. 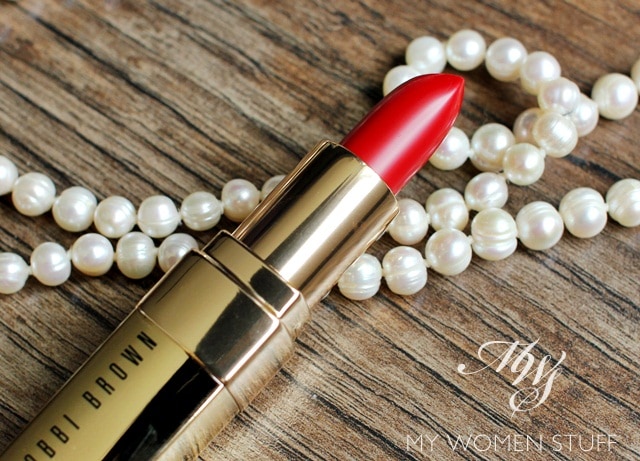 You know me and red lips and what’s an image of Old Hollywood without the signature red lips worn by screen sirens of old right? This is the Bobbi Brown Lip Color in Old Hollywood (RM98), a bright warmed red in limited edition gold casing.

You know what’s interesting? I just realised I’ve never tried Bobbi Brown lipsticks! This would be my first. The colour in tube bright and I can imagine, intimidating to many. I personally find it a bit warm for my tastes, but it does harken back to red lipsticks I’ve been used to seeing from the past. That sort of bright chilli red that really gives that POW! glam look. 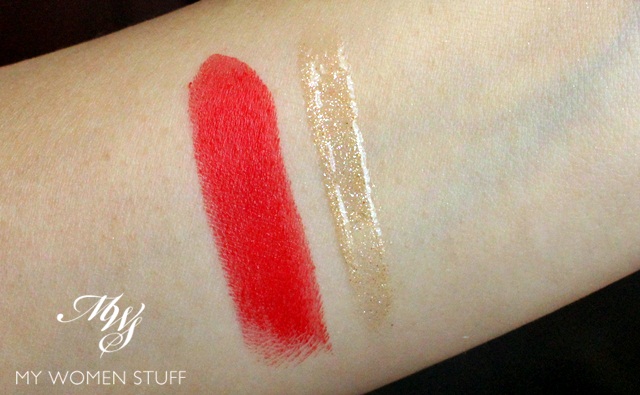 I think that swatch says it all right? 😀 It’s bright, it’s bold and it’s Old Hollywood. Contrary to the eye palette, the lipstick applies creamy and pigmented and one layer is all you need for a lovely glamorous red lip. But if you want it to last longer, layer on another layer for even more intensity. I didn’t find it drying and longevity was fair enough. It didn’t travel either because the formula isn’t that creamy. Just creamy enough so it doesn’t tug on your lips.

The colour isn’t matte but there is no shimmer so if you want to give it a more modern twist, then dab on some of the High Shimmer Lip Gloss in Candlelight (RM88). It adds golden shine to the lips and makes it look very festive and plush. There are 4 colours in the range – Candlelight (light pale gold), Rose (shimmer pink), Siren Red (red) and Old Hollywood (yellow gold) so if a layering gloss isn’t something you’re looking for then look to Rose or Siren Red instead. 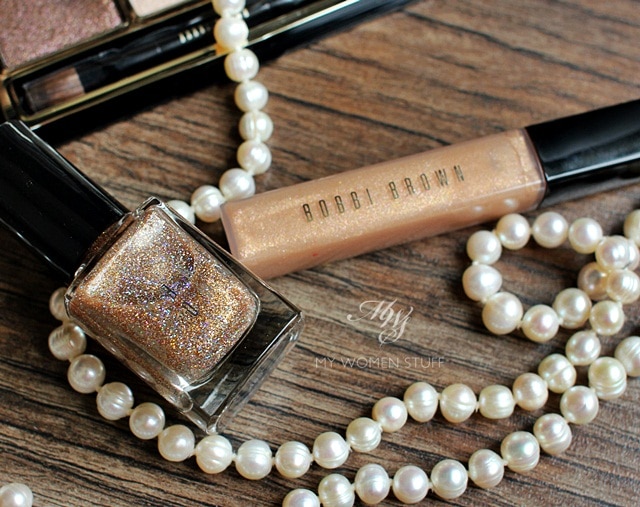 If glitter and shine on your face isn’t your thing then how about a touch of glitter for your nails instead? The Bobbi Brown Glitter Nail Polish in Chrome (RM65) is a bottle of multicoloured glitter that adds that touch of bling to your nails.

I’m not into nail polish and if you’re not good at it, like me, always go for a shimmer/glitter polish. Mistakes don’t show up and the bling on your nails will blind anyone into thinking you have perfectly polished nails 😉 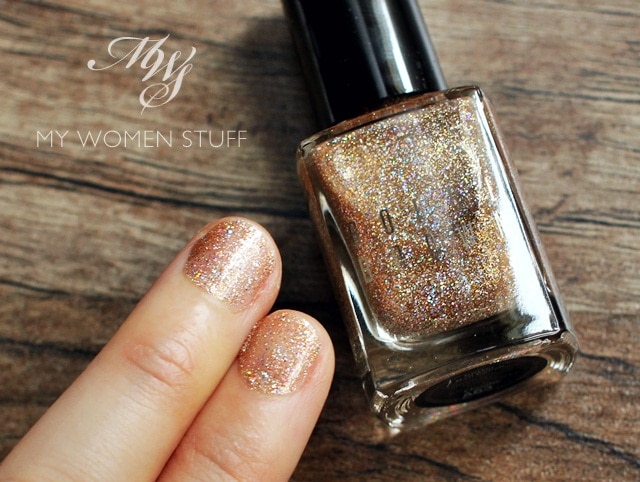 Pictured swatched just in one layer. Already you can see how festive your nails look! If you want more bling factor, apply 2 layers. Of all the items in the Old Hollywood range, I think this has the most fun factor and the most festive. Plus, in terms of nail polish, it’s also reasonably priced. Did I mention fun? 😀

I do have one more item from the Old Hollywood collection that I want to show you but not today. It’s a personal favourite and I’ll dedicate it its own post 😀

If you ignore the overly photoshopped Katie Holmes that fronts the Bobbi Brown Old Hollywood collection, I think there are items to like in here. But as with all makeup, it will always depend on your style and preferences. The Old Hollywood Eye Palette is nice to me, and I can make it work but I think that for the majority who want something easier to work with, it isn’t ideal. The texture is a little hard and dry. It’s nice when you mix and match the textures but it’s one to check out in person. The Old Hollywood Lip Color will appeal to those who are bold enough to pull off a bright red lip and the texture is quite nice and creamy. It isn’t so creamy that it bleeds or feathers which is always a boon. I felt it was comfortable to wear even if the colour isn’t as flattering on me as I hoped it would. The High Shimmer Lip Gloss isn’t something I personally like because I’m not into layering gloss over lipstick but it does make a colour like Old Hollywood look more modern and also helps tone down the colour, even if it adds high shine.

Pros: The eyeshadow palette is a nice portable neutral palette with a mix of matte and shimmer shades, The lipstick is creamy and pigmented, The nail polish is fun and easy to apply

Cons: Many will find the eyeshadow palette sheer and pricey, The Old Hollywood lipstick will not sit well on those who have very cool tones in their skin

Who will like this: Anyone who might be looking for a bright slightly warmed red lipstick, Anyone who loves sparkly glitter nail polish, Anyone already familiar with Bobbi Brown eyeshadow textures and who prefers a sheerer texture in eyeshadow

Here’s how I wore the items I’ve featured to give you an idea of how they look. The first picture is of the lip colour without lip gloss. In the second, I dabbed on some of the Candlelight lip gloss to add shine. 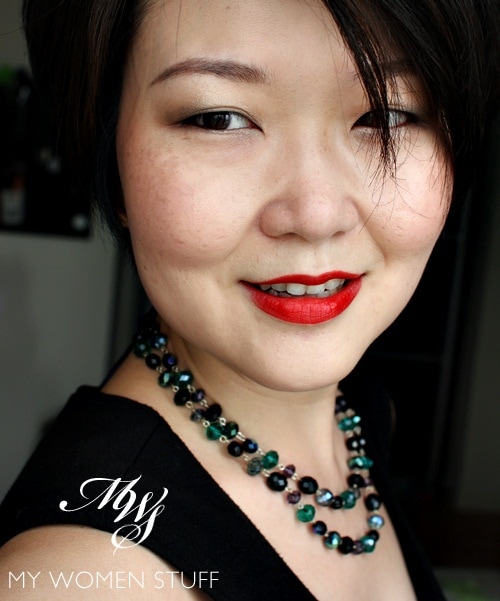 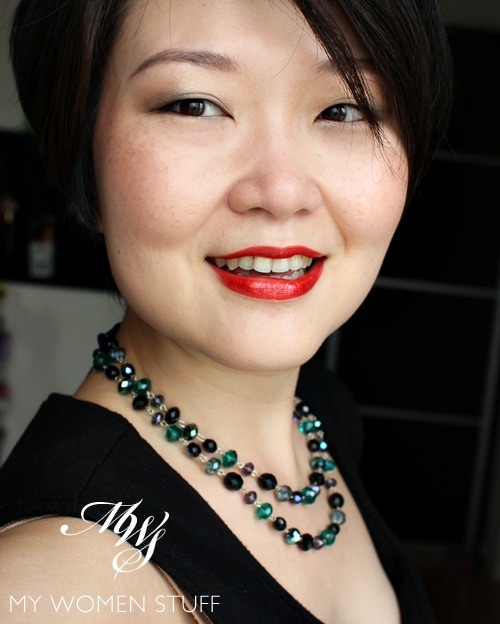 On eyes I had the Old Hollywood Eye Palette with Fog and Eclipse to shade from the lashline and in the outer corner, Candlelight Gold as an all over lid shade and Ivory to blend and tie all the colours together. Add liner to define eyes and voila! 🙂 On cheeks, I had the Nude Glow shimmerbrick with a touch of Apricot blush, and pressed Meteorites all over.

Did you take a look at the Bobbi Brown Old Hollywood collection? Does anything leap out at you (even if you aren’t looking to buy?)

For me, the first thing to leap out at me was the eye palette, strangely enough. You’d have thought it would be the lipstick! I found the lipstick a bit old fashioned but damn! It channels Old Hollywood, alright! 😀

Bobbi Brown Old Hollywood is a Limited Edition collection for Christmas 2013. Prices of featured items are as set out above and they are available at all Bobbi Brown stores and counters.

Disclosure: Featured products were press samples for consideration. Our commitment is to deliver honest thoughts and reviews. For posting guidelines please read the disclaimer.