Home » Lips » Lipbalm » Honey, If it’s not you then it must be me : Skincare products that didn’t work for me

Every so often, as I go along my skincare journey, identifying my must-haves and current skincare loves, I too discard alongside the ones that didn’t make the cut or the ones that just don’t work for me one way or another. Most of the time, I don’t feature them at all. Why feature something I don’t like?

But then, I realised that it’s helpful knowing what doesn’t work for people because you can then avoid it, or if you are still very curious anyway, be aware of their pitfalls. So, unless they stand out as being spectactularly awful, in which case they will get a whole post to their awful selves, I might do some of these little round-ups as I go along, to balance out the raves I’ll have. 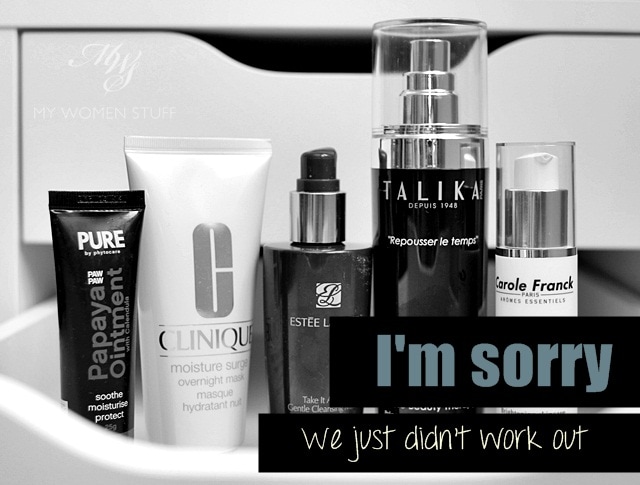 I’ll start off with a selection of skincare that I tried a few months ago and for some, I’ve been trying them off and on for months, to see if they truly do not work for me or just do not endear me to them for some reason. If they work for you, it would be helpful to know because it can help other readers make up their minds 🙂

This was a gift, and while I hate to diss gifts because I know the gifter means well, this just didn’t cut it for me. What this is, is an ointment very much like the Lucas’ Papaw Ointment which is made from fermented papaya or papaw (paw paw) and has a myriad of uses to soothe, moisturise and protect the skin. I am a huge fan of the Lucas’ Papaw Ointment and because it gets a lot of flack for containing petroleum (which doesn’t bother me), I hoped I’d like this one. Sadly, I didn’t. I found the ointment far too runny even after being kept in the fridge, and the strong sweet smell put me off. I might hand it off for my nephew’s use. I don’t think he’ll be as fussy as I am 🙂

I love the Clinique Moisture Surge Extended Thirst Relief Gel Cream and I even use that as a mask sometimes. Just layer it on thickly and go to sleep, just as you would a sleeping mask. So, when I was handed a tube of the Moisture Surge Overnight Mask with the suggestion that Clinique had taken note of people using their Moisture Surge gel creams for this purpose, I was really intrigued.

Many months down the road and many uses later trying to fathom what I thought of this, my conclusion was that I didn’t like this. The product itself is rather creamy and it feels sticky on my skin. It also did not absorb very well. The instructions call for you to apply generously to your skin and massage it in until it absorbs. I could do that till the next morning and it would still feel greasy on my skin. When I wake up, I feel like there’s a film over my skin that I want to wash off. I just never got the “Wow, my skin is going toing toing!” factor that I had with the regular Moisture Surge Gel Cream and for that, this ends up here. I’d much rather just get a tub of Moisture Surge cream that I can use as a light moisturiser or as and when I need it, as an overnight mask.

I’d actually used up a whole bottle of this one years ago without really forming much of an impression about it. It was back in the day when I’d buy random items to make up the amount needed to get a GWP. Ah, yes. Those were the days 😛 Not long ago, I discovered a bottle of this and decided to give it another go. This was when I was experimenting using cleansing creams and milks and this was right up my alley.

Meh. It stung my skin! I have no idea why but when I apply this cleansing milk on my skin, I get a funny tingling feeling and it doesn’t feel very comfortable at all. Tried it a few times and decided not to chance it further. Also, it didn’t clean off my makeup very well 🙁 I like that it comes with a pump but I don’t like that the pump doesn’t have a cover LOL! You unscrew the gold cap and replace it with a pump. I’d much rather it came readily packaged and with a proper cover. But since it doesn’t work for me, I don’t suppose it matters eh? I know this one has been around a long time and I’m sure many would have tried it at one point or another so I’d be curious to know how it worked for you 🙂 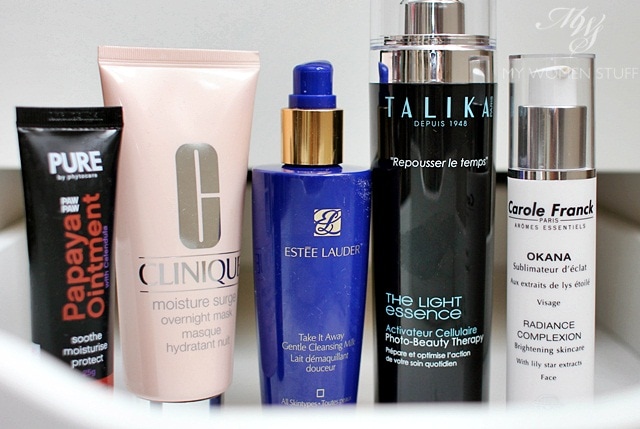 You may remember I featured this the new skincare range from Talika last week. I’d just taken The Light Essence Cellular Activator for a spin for a couple of days and broke out after 2 days. Yeouch! Nothing new in my routine. I’d just run out of my Estee Lauder Nutritious Lotion and thought I’d try this one instead.

I developed a couple of spots on my chin area and my cheek so I stopped. I didn’t like the texture which was was a lotion with a viscous texture and there is a strong scent of fresh roses. The latter is quite refreshing, but I suppose it just wasn’t for me. I haven’t had any breakouts since I established my skincare routine so I can safely point my finger in this direction.

Carole Franck is a salon brand and although I now do not randomly try whitening/brightening skincare I was interested because the Okana Radiance Complexion cream not only brightens skin but also has anti-aging and soothing benefits. The product targets 3 major skin disorders – wrinkles, brown spots and redness and is supposed to infuse skin with a pearly radiance. Ah, I had a lot of hope for this one!

The directions call for it to be used on bare skin alone or together with other skincare products. I noticed that the product pumps out in a creamy texture so I started out using it alone. It certainly felt creamy enough. However, I soon realised that it wasn’t enough. My skin felt and looked dehydrated and dull. So, I tried using it like a serum, under a moisturiser. This way, it felt too heavy. And it still made my skin feel dry.

After about 3 weeks, I had to throw in the towel and consider myself defeated. This could be a good product, and it could work as promised and I had no breakouts, but my skin just found it too drying to be comfortable.

Have you used any of the products above? Has anything failed you recently?

I’d love to know if any of you like any one of these because you know, one woman’s secret potion is another’s poison and all that 😀 It’s just how skincare works! I’m sure there are fans out there so speak up!