Home » Eyes » Eyeshadow » Your Say: Do you prefer eyeshadow palettes or eyeshadow singles

I have been in an eye makeup rut for the longest time ever and even the thought of pulling out an eyeshadow palette in the mornings tire me. I just want something fast, and so I’ve been using a lot of cream shadows. But recently, I started making the effort to open the drawers again and experiment and things are getting better. Still in a rut, but slowing climbing back out. 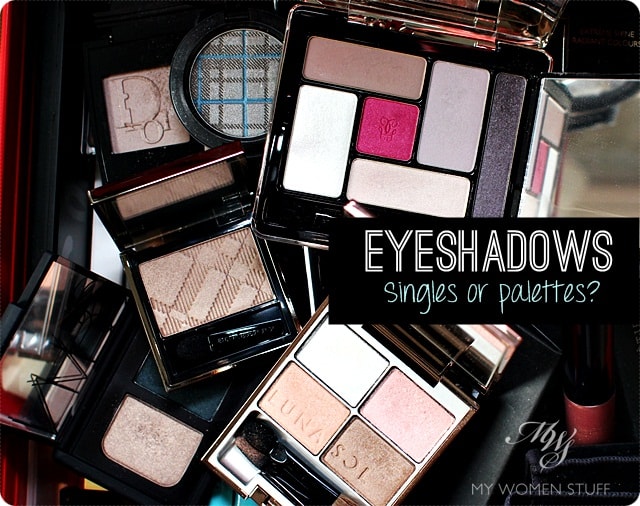 Which is when I noticed that I have an inordinate number of eyeshadow palettes from various brands.

And I noticed that I tend to reach for palettes more than I do eyeshadow singles! In fact, I have relegated my eyeshadow singles to the lower drawers of my storage and that just simply means I reach for them less often. I mean, you don’t really want to be bending that far down in the mornings do you? You just want to pick out something easy and go.

So I started thinking – do you prefer using or owning eyeshadow palettes or singles? Or are you one of those who depots all their singles and put them into palettes anyway?

I have found that I prefer pre-made eyeshadow palettes. The primary reason is because with most palettes, and I say “most”, they contain all the colours and textures you need to create a full eye look. Your base shade is there, and so is your liner or crease shade. You have the colour for highlighting and most of the times, the colours come coordinated, so mistakes in colour selection are reduced.

With eyeshadow singles however, you have to put a little more thought into it. If you aren’t the sort to depot their products, like I am, then you will have to pull out a few colours just to get one eye look going. Sometimes, that is just too much bother. Other times, it could be that after you apply the colour, it suddenly doesn’t look right.

Single eyeshadows offer more room for creativity in this regard, and if you are the sort who loves depotting their products then you can effectively build your own palette based on something you like, instead of being saddled with a pre-made one that stifles your creativity.

If I wear single eyeshadows, I find I tend to go for those that are a little more complex that allow me to wear them alone. This, as you might notice, is the lazy girl’s way out 😀 With one complex colour, I can just swipe on one shade and go. No need to fuss about with other shades. Otherwise, I tend to shy away from eyeshadow singles.

I’ve bought enough in my time to realise that it isn’t for me. I will more often than not, be more interested in a pre-made palette because someone else has done all the creative thinking for me. I just need to use it! 😀

What is your eyeshadow preference? Singles or palettes or are you a fan of depotting and making your own palettes instead?

I don’t depot because I like seeing my things in their original cases. I am less inclined to use a product after it’s been put into a large palette where the pans don’t line up properly or are in different shapes. Also, I have no illusions about being a makeup artist so large palettes don’t hold my interest at all. I much rather deal with a smaller palette, whether duo, trio or otherwise. In fact, even the large Naked2 palette doesn’t hold my fancy very much, simply because there are too many colours in there. The maximum I’d accept in a palette is 6 and that’s only because the gorgeous Guerlain Ecrin 6 palettes have 6 colours. Otherwise, 4-5 colours in a palette is more than enough for me 🙂

PREVIOUS POST: Origins Ginzing Moisturiser : The affordable addiction that gives your skin a shot of espresso and your senses a citrus boost
NEXT POST: Laura Mercier Silk Creme Foundation – Photoshop in a tube, once you get past the pitfalls